“I find that artists who get saved later in life have a stronger call from the stage because we’ve been there. I played for the devil all those years not even knowing it. I saw things I would never want [anyone] to see, ever. Name something and it was happening; it’s all a chase for fame. But now it’s a chase for Jesus to have the fame.”

The struggle for Benny DiChiara was what to do with his passion for music after he was saved at the age of 35 following years of playing the secular rock circuit in New Orleans. From that struggle, the band Empowered was born. DiChiara recognized how empowered he had become through music and desired to use those talents to now empower others. He realized that he didn’t have to give up his music, just the lifestyle and atmosphere of what he was doing before.

Performing was always a part of DiChiara’s résumé, and now as an opening act for artists including Chase Crosse, Jaci Velasquez, Point of Grace, Audio Adrenaline, Switchfoot, and most recently Mercy Me, Empowered is certainly no stranger to the Christian performance circuit. However, the change from his previous performances to these came in ensuring an aspect of worship during their performances. That aspect is of the utmost importance to DiChiara, the calling behind the talent.

“I’ve been asked to just get up and play through the set, not to talk about that ‘God stuff’ because that’s not what they wanted. I was able to honor that request even though it was something that really turned me off because my lyrics are my testimony,” DiChiara explained. “That’s all the words I need to use. I’m not an artist that writes songs that can be used interchangeably as a worship song and a love song. I always say ‘Jesus’ not just ‘him’. My songs aren’t cross-overs.”

DiChiara said there is a key difference in what they do, what he calls, “performance and worship” and what is done in churches, known as “praise and worship”.

“There is a fine line, but I think God honors that line. You can’t do what we do as performers from the stage in a church on Sunday morning and have it be the same thing. Praise and worship is about ushering God in; performance and worship is about honoring God in what you are doing,” he said. “Your praise band is not your opening act. In churches the struggle becomes not about praise, but about performance. That’s not what it is about, and that’s why I’m not on my church’s praise team.”

With an age range spread across two decades, the witness of Empowered’s members reaches many. “It’s really cool to see how God does that,” DiChiara said. “How His hand just makes everything work even when it seems like it won’t, and obviously, if His hand isn’t on something then it won’t work anyway.” The other members of the band, Shane Madere Jr. (lead guitar and back-up vocals), Danny Trahan (guitar and back-up vocals), Jay Yuratich (bass and back-up vocals) and Chris McCullough (drums) share DiChiara’s vision. 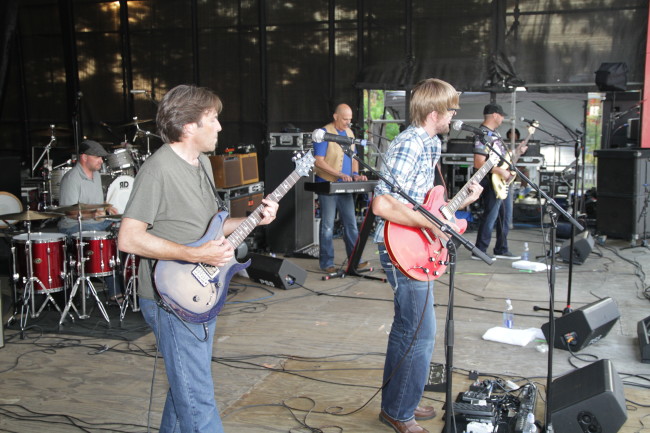 After several years of pulling together new material, their album Soul Cry was recorded in Nashville with the talents of Jason Wall at Angel on the Wall Music, Multi-Grammy Award winning producer and audio engineer Jim Dineen, and Erik Wolf at Wolf Mastering.

“People were saying, ‘You sound like Boston or Journey found Jesus and cut a CD,’ and I was struggling with that classic rock vibe. Then one day, God said, ‘How old were you when you came to know me? How many people do you think are like you, who love a certain style of music then come to know me and there is nothing for them?’ And that’s why He chose me,” he explained. “God likes to use not only regular people, but also resistant people. Look at Moses and Jonah; God was showing me all of these people He used that had made so many excuses why He couldn’t.”

“I look back over my days with the secular music crowd, when I wasn’t even saved at that point, and I was using the symbol of the cross and telling people who asked what it meant, ‘That’s who is going to get me where I want to be.’ I look back at that and I know He was talking to me because how else would I have known that? Why else would I have said that? But that’s how it works. He has always been there for us, it is just up to us to pursue Him.”

DiChiara has also used his band to help raise awareness and funding for a cause close to his heart. A portion of each CD sale goes to Children’s Cup to help with providing meals, wells, education, medical care, etc., and instead of selling t-shirts sporting Empowered logos at the merchandise tables they sport the Children’s Cup.

“What I do is very important to me. Some people just can’t understand why it is I do what I do, or how it is I do it, but it is because I am called by God to do it. It is that simple.”