After a three-week visit to their hometown of Baton Rouge this summer, Scott and Lee Pyles were ready to return home … to Africa.

Africa has claimed their affections for more than 20 years, ever since they answered a spiritual calling that tugged at their hearts from 7000 miles away. As administrators of L’hopital de Meskine in Cameroon, Scott and Lee have helped to provide spiritual and physical healing to thousands of patients since the hospital opened its doors in 1994.

As a young couple with two small sons in the early ’90s, Scott and Lee had participated in several outreach programs through Baton Rouge’s Chapel on the Campus, but they thirsted for something more meaningful. When Medical Centers of West Africa was founded as a medical mission in sub-Saharan Africa, the couple could see their future taking shape.

“It was not an easy decision,” said Lee, who realized that the couple’s plans would affect their children’s futures as well. “We were very young, but we both felt strongly in our hearts that we wanted our lives to count for something,” she said. “We wanted to help the ‘unreached’ find Jesus. After a lot of praying, a peace came over us and we knew … we just knew.”

Cameroon is a French-speaking country that borders Chad and Nigeria in northwest Africa. It is populated mostly by Muslims, and the area is marked by extreme poverty and lack of education. The hospital was built in the village of Meskine and that is where the couple settled. Their sons Michael and Charlie were joined by a sister, Jessica, a few years after their arrival. “We always told our children … ‘you don’t get to have an ordinary life,'” said Lee. “You get to have an extraordinary life.”

As for medical care, L’hopital de Meskine was a light in the darkness, and people traveled long distances to receive treatment at the 120-bed facility. Today, an average of 200 patients per day visit the hospital, where physicians and nurses do surgical procedures, treat infectious diseases, deliver babies, and provide pediatric care. Prosthetics are also a big part of the hospital’s practice. The hospital has two operating suites and an outpatient clinic. Other services include pharmacy, laboratory, physical therapy and radiology. The medical team is always changing due to volunteers from all over the world who donate from two weeks to two years of their time as medical missionaries.

Medical services are available to patients regardless of their ability to pay. According to Scott, a “poor fund” helps those who are destitute, but in most cases, families will get together to pool their resources in order to pay their bills. “If it means selling a goat,” that’s what they’ll do,” said Scott. 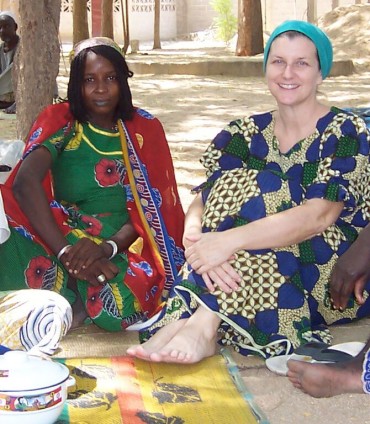 MCWA’s medical ministry is just one side of the coin. The bedside ministry is the other. “We never force our beliefs on patients,” said Lee, “because we know there is some danger of persecution in this part of the world. But we do pray with them and share our faith. Some people are not interested, and we respect that, but others are drawn to what we have to say and want to embrace God.”

“There is so much hopelessness in this part of the world,” said Scott. “We’re teaching people how to rise above their hopelessness and find a new way of life that will continue long after we are gone. We have seen a lot of doors open for ourselves and for others. We see that the Word of God is a powerful thing.”

If any one thing has threatened their mission, it is the political landscape. Their corner of the world changed abruptly in 2014 when terrorist attacks and kidnappings became frequent. When the violence came within 10 miles of the hospital, Scott and Lee knew it was time to leave.

“We didn’t want our presence (as Westerners) to put the hospital or its patients in harm’s way,” said Scott. “And now we are certain that this, too, was part of the plan. The safest place to be is at the center of God’s will.”

Their departure has had a silver lining, as the Cameroonian employees have had to operate the hospital on their own in the past year. That, too, has always been part of the plan. Volunteers train the locals to take over their jobs once they leave so that the hospital can eventually stand on its own. That includes nurses, therapists, technicians, builders and administrators. It’s hoped that the hospital will be self-sufficient within five years.

When that happens, Scott and Lee’s work in Africa may be done. “We’ll know it when the time comes,” said Scott. “In the meantime, we’ll continue to be grateful for the opportunity we’ve had to make such a difference in the lives of the people here.”

MCWA offers many opportunities for those looking for a way to serve God. If you feel a calling within your heart, contact MCWA, which is headquartered at 9611 Siegen Lane in Baton Rouge. Office hours are 8:30 a.m. to 5 p.m. Monday through Friday. For more information, call (225) 343-1814, or visit mcwestafrica.com.