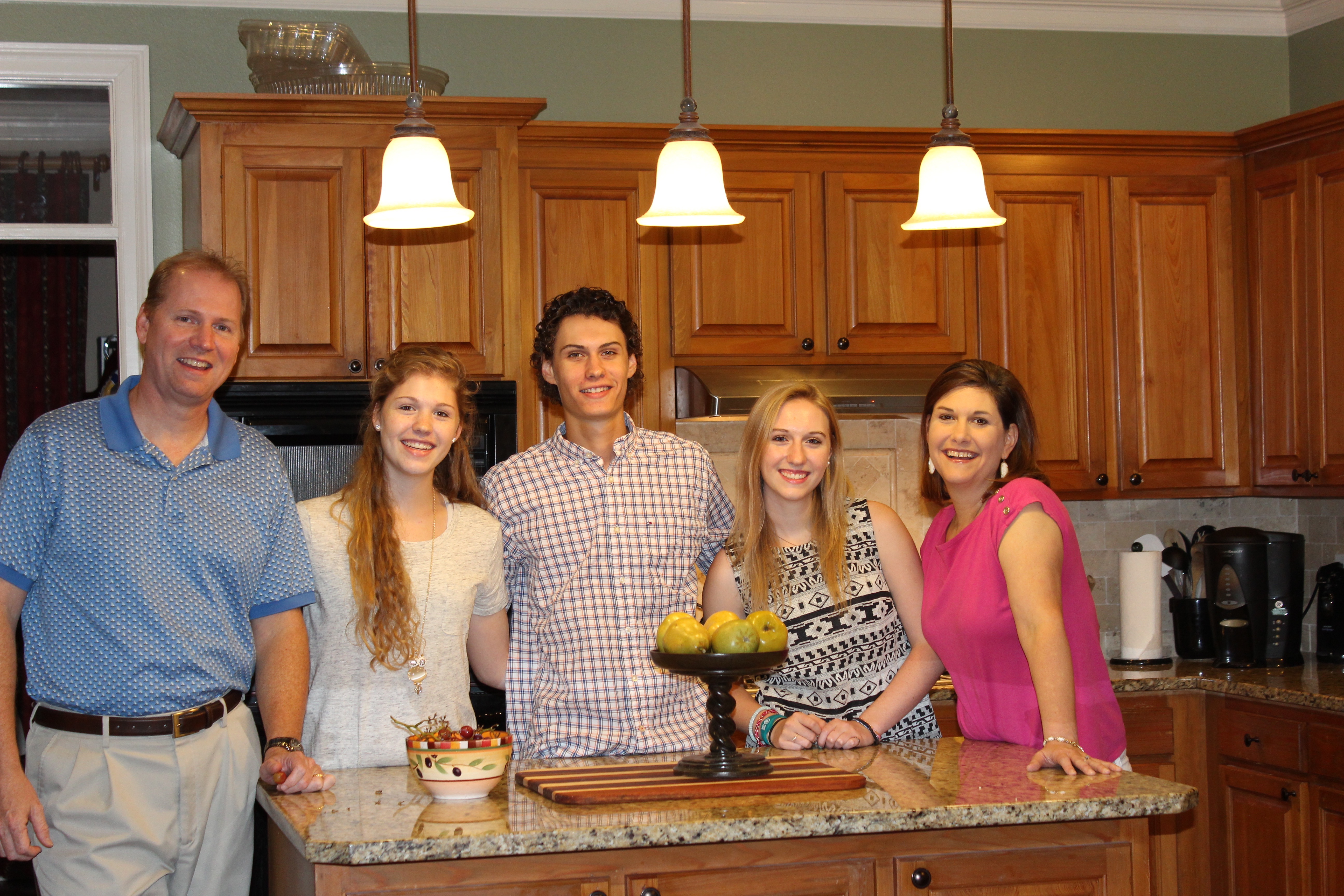 2 Timothy 1:7 (the Day’s family scripture even before January 2012) “For God has not given us a spirit of fear, but of power and of love and of a sound mind.”

“What are we about to go through?” David Day remembers thinking to himself as they waited on news of their son in the emergency waiting room. “We were just at home watching the Saints. It was a normal, after the holidays, chill, Saturday night,” his wife Sue began. Their 15-year-old son, Caleb, had done everything he was supposed to do. His parents knew where he was, he had stayed where he was supposed to be, he was with the people he was supposed to be with, but that still didn’t prevent the phone call they had received moments before.

“What do you mean he’s been shot?” Those were the words Sue and their daughters Kelsey and Katie heard David speak into the phone before he jumped off the couch and ran to the bedroom to get ready to leave.

As a parent you live with bordering rational and irrational fears about things that could happen, knowing the chances are very slim, but that you can’t truly prevent them from happening. What do you do when it actually happens to you? What if your greatest fear came true? Then what? You’d be devastated. Then what? You’d struggle, maybe not even wanting to get out of bed for days or weeks. But then what? If you ask yourself, “then what?” enough times, the truth of devastation is eventually this – you have to get up, you have to move on, you have to heal. Things may never be the same, but you make life your own again.

The Day family had to learn the hard lesson of returning to a sense of normalcy when such an egregious event has happened. It’s been almost four years since that day, but it’s still a moment that is freshly relived at the drop of a dime.

Caleb was waiting for his friend’s dad to pick them up from the Mall of Louisiana when he heard the shots.

“All I could think was, ‘take cover,’ like in a video game, and we ran,” Caleb explains. “I couldn’t feel my arm, but I thought it was just the adrenaline. When I looked down that was when I realized I had been shot; there was just a big hole there. A guy came around the building and he got a rag and said, ‘Put this on your chest.’ When I asked him why he told me, ‘You got shot there too, buddy.’ I just sat there in a pool of my own blood waiting for the ambulance to come.”

The bullet that entered Caleb’s chest left three large, gaping holes where it exited his body, in addition to the large hole left on his right arm. The bullets had gone through Caleb and into his friend Trent Miller whose dad was already on his way to pick them up when the shooting occurred. Luckily, their other friend Nick Brooks managed to escape without being shot and was able to check on his friends.

“We were in shock mode,” Sue remembers, “They wouldn’t let us go back. We hadn’t gotten any details about what had happened and they had told us we just had to wait.” The family describes a moment they had in the waiting room where the four of them just gathered together to pray, not knowing what else they could do.

“Eventually, they took us down what we call ‘the longest hall ever.’ The whole time you’re walking, everyone is just looking at you. We had no idea what we were walking into, so we were kind of trying to just gauge their faces to get an idea of what was going on and how bad it might be. It was surreal but there was still this sense of peace.”

“Everything was still under control,” David continues where his wife left off. “There was just this overwhelming sense that for whatever calamity or chaos was going on [in that moment] or even in the very near future, it was still between the lines somehow. I knew that was God saying, ‘I’ve got this.’ He didn’t say, ‘Everything is going to be fine,’ but I knew He had it,” David says. “There was a fear, but it wasn’t an incredible fear. It was certainly over my head, but it was under His feet.” Whatever unknowns the Day family was about to face they knew two things: that it was all in God’s control, and that they had a hard fight ahead of them.

Each member of the family was forced to take on the added challenges when it came to healing from what they had gone through.

“We’ve never lived another life, so we don’t know how we would be, this is our normal,” David is quick to explain that when it comes to healing from this event, they don’t really know any differently, but their “normal” has certainly not been easy. 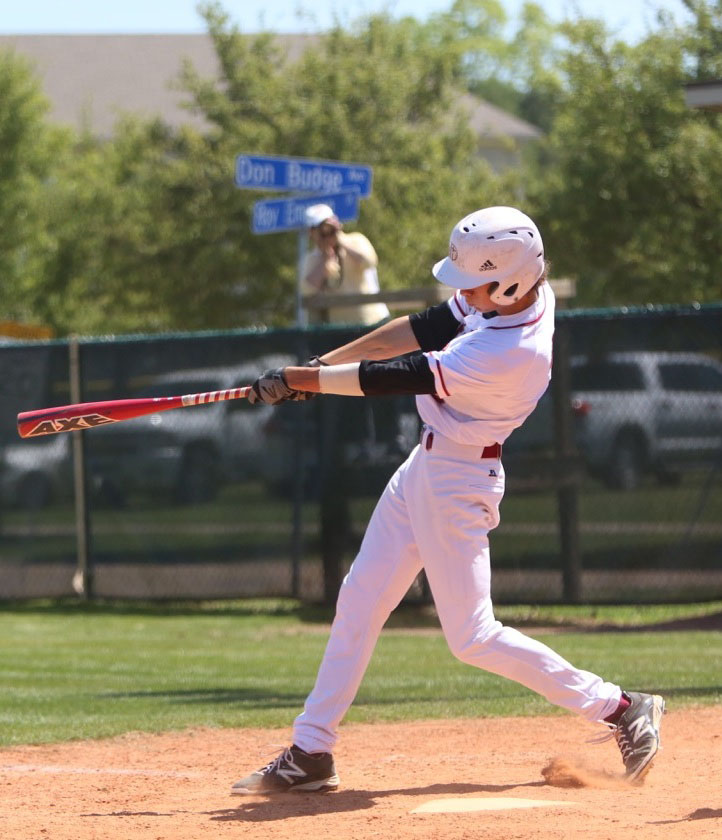 Caleb, a lifelong baseball player, struggled immensely with the recovery and David and Sue struggled with figuring out how to support their son. They describe the ways God orchestrated every aspect of the recovery, especially when it came to what doctors were available during Caleb’s treatment. He had always been a left-handed pitcher, but having been shot in the chest and right arm, he was told he would probably never play baseball again. The entire family remembers seeing the pain Caleb was in as he endured rigorous therapy to even be able to open his fingers.

“I’ve only cried twice in my life,” Caleb says. “Once when they told me I’d never be able to feel my fingers again, and during physical therapy.”

The “driving force” the Day family attributes to Caleb’s recovery (both physically and emotionally) was baseball.

“It pushed me to keep going and to get back to normal,” Caleb says. “I didn’t want to be seen as the wounded kid, and my parents continued to push me to be better. They didn’t let that fear stop me.” David and Sue seemed to take on one very important, albeit uncomfortable, role with their son, pushing him farther than he would have gone on his own.

“They kept forcing me out of my comfort zone, to be even better, to keep going,” Caleb recalls.

Sue remembers the day she told her son, “You’re going to have to start going out there [with the baseball team]. You have to be out there just like everyone else.” David adds that it went from going out with the team, to dressing out with the team, to doing drills with the team. Each step helping Caleb gain more and more confidence in his recovery. They also recall the fact that recovery wasn’t about simply being tender with their son, but it was about getting him back out there so he could succeed.

“As a mom, when I saw him in physical therapy with tears in his eyes as they bent his hand back trying to get his fingers to work again, I wanted to go momma bear on them, but I knew that this was the best person to work with our son to get him back to normal,” Sue says. Because of that, Caleb was able to go from being told he would never play again to actually starting his senior season.

As a side note, and something that Caleb himself almost didn’t even mention, there was one game Caleb pitched before starting his senior season. He was shot on Jan., 7, 2012 and on April 13, just three months after being told he

would never play again, Caleb managed to get out on the field for the very last game of his freshman season and pitch three whole innings.

Kelsey and Katie both recall how hard it was for them to see their older brother struggling so much, but they had their struggles as a result of the shooting as well. Now, as 15-year-old girls, they desire nothing more than to just be normal, something that is seemingly impossible when living under the shadow of family tragedy.

“This is something I’ve never really vocalized before, but it’s really true, they’ve extended grace to us. We’re still figuring all of this out,” David says as he gives each of his daughters looks filled with love and pride.

“That’s one thing that they live with: we as mom and dad still struggle,” Sue agrees. “We’ve had to have many open discussions when the girls are disappointed in a decision we’ve made. We have to try to help them understand our perspective and what we’ve gone through and how we felt, but we can’t let fear determine the outcome,” she says.

“Do you want to know where we were when we got word of the shooting in the Lafayette movie theatre?” David chimes in. “Caleb and Sue and I were eating in Whataburger, and Katie and Kelsey were in a movie theater. There was just this feeling at the table of ‘this is ridiculous.’”

“This whole thing has been a journey of seeing God’s hand of protection,” Sue shares. “He truly did protect him. It was within an inch of a very different outcome. He was in harm’s way, and damage was done, but God never said we wouldn’t go through trials. In fact, He says to consider it joy. That’s been our journey, finding the joy in the midst of the struggle.”

David adds to his wife’s sentiments, “Bad things happen, but God’s hand of protection was on us. God’s economy is different. We’d prefer bad things not happen, but He has given us a story and we are confident in sharing our story because it is God’s story.”

As is the case in every tragedy, the Days have certainly realized that nothing is guaranteed and time shouldn’t be wasted, but as parents David and Sue have been granted the great privilege of seeing their children in their youth overcoming obstacles and gaining a perspective most don’t get until much later on in life. The atmosphere in their home is one of respect, love and maturity that normally is not seen in a typical teenage household.

Even though there are certainly the normal struggles, the undercurrent of their experiences together is strong. It is proof of a family who has faced the unimaginable and made it through the other side.

“It’s easy to look back now and say that we are fine,” David says in closing. “But the last three years, it has literally been an uphill battle. Every time I post something about Caleb [on social media] I use #mountainman because he climbs mountains. The Caleb in scripture said give me the uphill battle because I’m strong enough, I can take on the tough guys.” The room grows silent as David chokes up a bit and looks at his son, “And his name is Caleb.”