“Now to him who is able to do immeasurably more than all we ask or imagine, according to his power that is at work within us…” Ephesians 3:20

To Tori Bliss, a 5th year senior at LSU and Portage, Ind. native, this verse means that even in our best, God can do so much more, and she is living her life in pursuit of “more”. Living to embrace every aspect of her life in a way that can be used for God’s glory.

Tori says she has just one message she would like to share, a message that there is purpose in the failure and to accept both the good and the bad in our lives with equal recognition.

“Don’t be afraid of failure. The more you grow and understand God, the more you know that He will boast in our weakness. Recognize failure as growth. Recognize wrong and move on.” Perfection is not the goal; just embrace who you were created to be. Live life based on your talents and your strengths as well as know your own weaknesses and struggles.

“Be the girl that everybody looks at and says, ‘Man, she’s so good [at whatever it is you are doing]. Embrace being talented too, it’s not a bad thing or something to be ashamed of.” For Tori, her talent has provided her with many opportunities, and her failures have helped her become a better person. That is what life is all about for her.

In 7th grade, Tori became involved with track and field, focusing on shot put and discus. Now, as she is moving on into the professional level you can see the strength, training, and endurance that such a sport has required of her throughout the years. She describes it as a “big picture” sport. The weight of the shot put doesn’t change from high school to pro, so the focus becomes developing your technique, your control, your strategy, and your endurance.

It is a high pressure, high stress, low spotlight event for the athletes who compete, so it simply out of love for the sport and not for the money that is to be made in the “flashier” events. In fact, she will be working in order to support herself while training and competing at the professional level.

Unlike other sporting events, Tori still hasn’t hit her peak. “It’s just a waiting game to see when someone will hit that big throw. It could be at any moment, and then you’ve got to step up your game.” Compared to only 4 years in college to develop on that level, a professional has 10-15 years to develop and the athletes usually hit their peak at a higher age than most sports (around 27-29). Her PR now is 60′ 8” (well above the average college woman’s throw of 53′-55′) and she will need to push herself into the 63′-65′ range.

As she describes the event and all that it entails, it is easy to see the parallels outlined in Scripture for Christian living, discipline, and endurance, and Tori has used her position to speak to the glory of God through it all.

“I was raised as an only child in a single parent, non-Christian home. I had cousins who went to Christian school, so my only exposure was their [school] plays. It isn’t like it is here in the south, where everyone goes to church whether they are a Christian or not.” Her first real exposure to Christ was when a fellow athlete invited her to Fellowship of Christian Athletes (FCA). “Everyone was so nice, talkative, and friendly.”

At a time when she was struggling to feel “at home” here in Louisiana, FCA provided her with a chance to build relationships with others and form a relationship with Christ. She had the opportunity to witness her teammate, Kaitlyn Moreau, get her life completely turned around by God at the college athlete retreat.

“God just totally wrecked her, and she just became on fire, and her fire hasn’t really dimmed since then, and that was in 2012. God used her in a huge way to show me how powerful He was.” Later, at an FCA meeting, Tori felt a huge tug on her heart and gave her life to Christ. 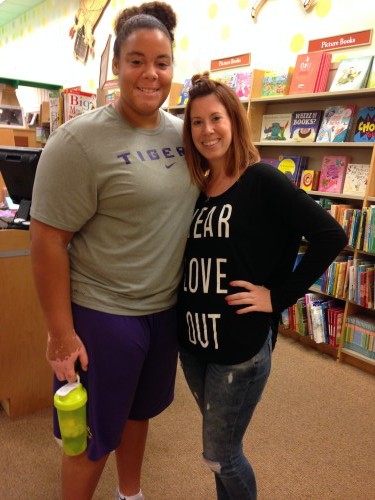 “The feeling that I had was insane. I felt like right then and there I could run a marathon. It was radiant.” Like many other Christians, at one point Tori self admittedly “shied away” a bit in her faith. She had met a lot of friends, had grown comfortable here in Louisiana, was having a great season, and was doing a lot of partying. When, in a huge upset, she didn’t make finals, she was instead given a different opportunity. In what would have been the week of nationals, she instead attended FCA camp and had the opportunity to lead a middle school group. “God used that and I realized I needed to keep God at the center of my life. From then on was when things changed and I became secure in Him.”

She is now on leadership for FCA and volunteers at Healing Place Church with the children’s ministry. “I’ve noticed that when things are going bad, it’s because I haven’t been pursuing God the way I should. I hadn’t been taking advantage of my opportunities.” Since she did not grow up in a Christian environment, Tori finds great joy in seeing children’s hearts so open and receptive to the gospel.

“They have such a child-like faith; just believing, no questioning. They don’t have to argue within themselves yet about all of the beliefs that they have that go against what they are learning about God.” Tori describes a major turning point in her Christian leadership when she realized that it wasn’t a “competition” (something hard for an athlete not to focus on).

“You don’t have to worry about how many people you are getting to come [under your leadership], you focus on who you have, stay focused in prayer, prepare your heart for whatever God has planned. Once I realized that, my small group grew to three times as many people as I had before.” Her mantra became “Not my words” something that each Christian should be living by. “My heart was focused on pride and success, so He wasn’t ready to give me that. I was speaking and thriving on a response, versus changing lives and pointing people to God.”

Now Tori lives her life one way, running toward the Lord in all that she does.

1 thought on “Tori Bliss: Running Toward the Lord”