To know LaTangela is to know faith. Whether scrolling through her Facebook, Twitter, or Instagram, it is apparent that God is so much more than just a hashtag for this media personality. And she is taking the entertainment world by storm.

It’s not hard to see why she is leaving such a mark on the media world. Her infectious personality, loving mentality, and pure, raw talent draw you in from the moment you first see the sparkle in her eye or hear the laughter in her voice.

To hear others speak of LaTangela is to hear of true leadership. Her platform is one she uses to mentor, inspire, and move throughout the community. And she is succeeding.

Her life is on the go, constantly serving those around her. One moment she is being asked to speak at a teenager’s pool party, the next to host an amazing event at a nightclub. No matter the opportunity thrown at her, or how it may be viewed, LaTangela uses it to be a witness of a Christian life.

“You get access to all these different things. What you do with that access shows who you are. I am cautious about the things I grasp and how I use it.”

Remaining strong in faith and influential in ministry while serving in a mainly secular atmosphere requires a firm foundation, discipline, and a complete knowledge of one’s true purpose. “I just make sure I’m always walking in my lane, serving my purpose, and not becoming what I know was not intended for me,” LaTangela says of her life in the spotlight.

At 15 years old, while attending Baton Rouge High, LaTangela wanted to participate in the radio program. Although the program wasn’t full, she was turned down. Instead of seeing that rejection as an end, she decided to instead go to the local radio station to try to get into “real” radio.

Master P happened to be holding open auditions for the “Partners in Peace” teen talk show. LaTangela was asked to host and later produce the show. “I started working at the station after that. They got tired of telling me ‘no’ because I was too young. In fact, I said, ‘You’re going to get tired of telling me no before I ever get tired of asking,’ so they put me on an old school overnight show that I loved. It’s been 18 years and it hasn’t felt like a job so far.”

“I still get to talk to a lot of kids and see what is going on, and that was the intention from the jump. The Partners in Peace show was a show by us, for us, that let parents know what was going on. I still get to do that a lot. I go into schools and visit them at church. I get to catch them in every day life, but my job keeps me cool enough to still [influence them].”

On being viewed as a community activist and public face, LaTangela has this to say, “It’s cool when people know you are the go-to person. That’s pretty much what I want to be. If there’s [something] going on in the community, it makes me feel good that people will say, ‘She’s the one who will care enough to tell people,’ and they know it’s not about my job at that point. Once you become engaged in what you’re doing and you care, you become the filter.”

And that is what she desires to be as CEO of 430 Status, LLC. “I want to be the umbrella for everything people need. Whether it’s a program or a mentor, etc. I want to be the source that will lead you to the right place and not just throw you off.”

When asked if it’s hard keeping up with so many events and speaking engagements as well as doing her regular daytime work, she replied, “Once you make [being involved in the community] a part of your daily routine and your lifestyle, it’s not work. You are walking in purpose.”

“I don’t wake up in the morning and say, ‘I want to be a role model,’ I just wake up, say my prayers, and ask God to lead me in the right direction. I try my best to make the right decisions.” As a DJ for MAX 94.1FM (heard Mon-Fri, 9 a.m. – 2 p.m. CST), as well as the host of “The LaTangela Show” (seen midnight CST on NBC following “Saturday Night Live”), and owner of her own YouTube channel, she certainly is heard, and respected, by many. 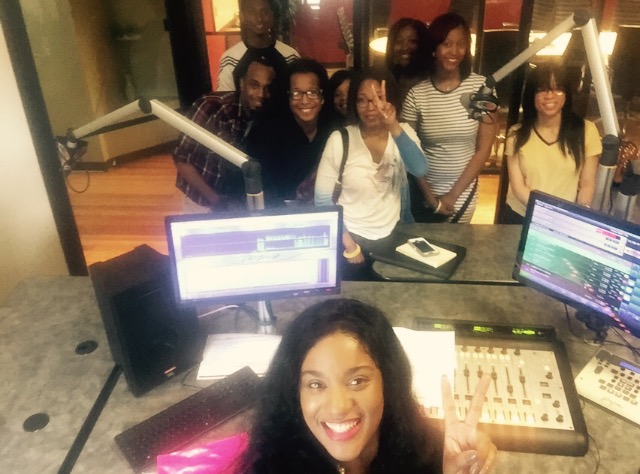 “Working at a hip-hop station people are always like, ‘She parties so hard!’ And I do enjoy my work, but I know how to do my job and not be something I’m not. I do think sometimes we become so uptight that we think we can’t go out and have a good time, but I’ve never had a drink, I’ve never done any drugs, and I started working in the club when I was 15 (well, I would broadcast from the parking lot because I was too young to even get in the club).”

“We have to learn the difference between entertainment and reality, and I can help impressionable minds understand that we are responsible for the decisions we make. It’s a lot easier to say, ‘This or that made me do it, or that’s what everyone is doing,’ but that isn’t true.” LaTangela herself is a strong example of what it means to be in the world and not of the world. She lives her life immersed in the culture, yet not tainted by it, and instead has left her own mark everywhere she goes. God truly has blessed her decision to not waver in her faith while on her platform.

“My grandfather, the late Rev. Jesse Lafayette, taught me to pray. He never told me, ‘Don’t do this or don’t do that,’ he just showed me what to do every day. He taught me the biggest life lesson is don’t ever judge somebody because where they are now you could be tomorrow.” LaTangela remembers every day that her life choices are how she got to where she is now, but that a different choice could have landed her in a completely different situation. She lives that truth with those around her.

No matter what she is faced with, LaTangela has decided not to waver from her beliefs while on her platform. “You can’t keep fighting someone who is trying to do the right thing. How are you going to criticize someone for telling girls to remain virgins, or for saying she doesn’t want to drink? Also, that’s my resounding message, but I’m out there living it. Now, some people don’t want you telling the truth all the time, but that’s who I am. I’m going to do what I’m going to do, and that is spread the Word. They know who I am and how I do that, so shame on them if they get upset at me for wanting to continue to do that.”

As the Production Director at Cumulus Media (the 2nd largest broadcasting family in the states), LaTangela has to keep one thing at the forefront of her mind in regards to her career. “Do titles become our gods? These microphones are powerful. They are 100,000-watt flame-throwers. I may not meet 75 percent of the people I talk to every single day, but they become familiar with me. I have to be careful what I say at all times. This mic is mine today, but it might not be mine tomorrow and God will hold me accountable for every word I said while I had it. I’m accountable for it all.”

LaTangela uses her voice in all media platforms to speak life to the world. Her album “Mixed Emotions” is available on iTunes, and in May, her book “A-Z, Lord, Let It Define Me” hits the shelves. This self-motivational book began as a personal journal. Writing this book is what carried LaTangela through the hardships she faced with the death of her grandparents.

“People say my grandfather would be displeased with this or that, but he wanted to make sure I was a good person and that I always stayed connected to God. Women in Media recognized me as the on-air personality of the year. When I got to the rehab facility to show my grandmother my award she already had the newspaper clipping. I don’t know how she got it, but she did. She was my biggest cheerleader. I just want to continue to make them proud of me, and to live my life serving God.”

“Every day we should ask ourselves, ‘What did you do in your purpose in life today that led somebody to Christ? Were you the example?'”