It is hard to understand until it is experienced. Some 150-200 people gather in a parking lot to worship despite the heat, cold, or rain. It is a church without walls of culture, socioeconomic standing or denomination. Over time, Open Air Ministries has grown from a handful of homeless people to a fully functioning church body and community outreach.

Every Sunday at 11:30 a.m., the crowd forms at the corner of 17th and Florida streets to sing, pray, and hear the Gospel. The message is compassionate and direct. Pastor Joseph Moore has walked in their shoes, and he lets them know it. Moore, a 25 year veteran of the Baton Rouge Fire Dept., says he went through a “desert place” after his divorce. He now sees it as a training ground for his ministry.

“Instructions that the Lord gave me when he sent me out there was to be firm but be compassionate, and to preach on my knees,” Moore explained. “I give God the glory for it because when I’m on my knees I’m not looking down on them; I’m looking at my brother, my sister…They recognize that my stories are real stories, not that I created, but that I walked through.”

“When everybody’s downtown, it’s like one accord, said Mike Grace, a member of St. Andrews United Methodist Church. “And God’s gotta be smiling on that.”

But it’s tough for people who have never experienced homelessness to throw a “Hail Mary” into the heart of the homeless community, according to Drew Hall of Christ Covenant Church. Pastor Moore bridges the gap. He can relate.

Open Air finds its roots in the A.C. Lewis Branch of the YMCA where employee Ginger Ford observed the daily dilemma of people on the street. They struggled with homelessness but also hopelessness. In 2001, she mounted a convincing campaign to redefine her role into one of pure community outreach. She began by collecting donations at each YMCA branch, then found a parking lot at the corner of 17th and Florida streets, next to the Society of St. Vincent de Paul.

Then came the stream of people. She parked the big white YMCA van in the parking lot, opened the back doors and began passing out goods. A petite woman with a few volunteers faced a mob of some 40 people asking for food and clothes. A YMCA board member, new to the process, stepped out of his truck ready to contain the crowd and organize the situation. But Ford’s strategy caught him by surprise.

“I guess Ginger saw it in my eyes,” said Trippe Hawthorne of University Baptist Church. She redirected him to a young man, bruised and in need of someone to listen. “That, to me, really set the tone and set the example of what we were there to do,” Hawthorne said. “And that was not to fix, just be community, just listen, sit and talk.” He was hooked. Eventually, he expanded the ministry to include bicycle repair and distribution.

An Easter Sunday service led to a request for consistent Sunday worship at the site. Moore said the results have been astonishing. “More than 2,000 homeless folks got saved on that parking lot,” he said. He now baptizes believers, performs marriages and intervenes on behalf of at-risk children. He also offers a lawn care service to help men earn immediate income. He is at the parking lot Mondays, Wednesdays and Fridays 11 a.m. -1 p.m. with clothes, food and toiletry items. When it’s hot, he asks for donations of mosquito repellant. In cooler weather, he collects socks, gloves, head gear, blankets and coats.

In an answer to persistent prayer, volunteers have appeared. Judith Hunter drove up one Sunday with a commitment to teach weekly children’s Sunday School. She was new to the area, but felt God’s call. 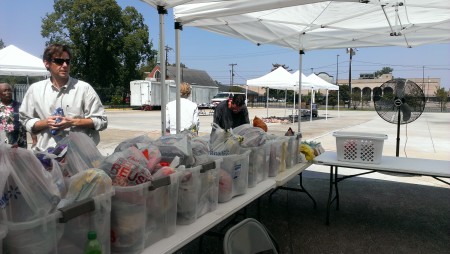 “So here we are wrestling with how we are going to start a children’s ministry,” said Hall. Basically what God has revealed is we just throw up the tent and he’ll do the rest.”

As the ministry has grown, so has its ability to meet needs. Churches provide Christmas presents for children and adults. Pastor Moore brings donations weekly from each YMCA site for clothing and toiletries. St. Vincent de Paul works side-by-side, passing along many resources, including food from Trader Joe’s and the Greater Baton Rouge Food Bank.

“It is a good synthesis because it is the same community and the same people,” said Kyle Beall of First Presbyterian Church. Monetary donations are now handled by Friends of Open Air Ministries of Baton Rouge, a 501c3 nonprofit corporation. All of the money goes to the ministry, according to Beall.

“You can ask yourself, if you were homeless, what would you want someone to bring you? And it can be that simple,” said Hall. “You can actually come on any Sunday and hand it to someone. This is the opposite of bureaucracy. This is – think it, pray it, do it. So, come as you feel led.”