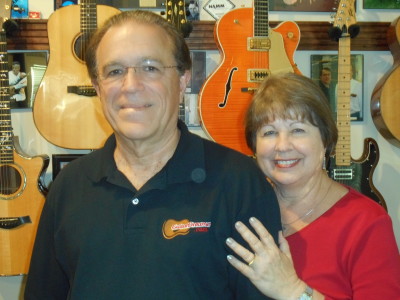 This is a story about music — how it shaped the life of Carlton Jones and by extension, the life of his wife Sharon, and the lives of hundreds of thousands of people all over the world.

From the age of 10 when someone put a guitar in Carlton’s hands for the very first time, music found a special place in his heart, especially for the praise and glory of God. Today, more than 50 years later, he is putting guitars into the hands of Christian musicians in Moldova, Vietnam, Honduras, Romania, China, and dozens of other countries.

The idea came to him 30 years ago when a group of Mexican children visited Carlton and Sharon’s church, Community Bible Church in Baton Rouge. “They sang for our congregation,” Carlton said, “and the boy who was playing the guitar was extremely talented, but his guitar was in terrible shape. It broke my heart. I could only imagine what a difference it would make if he had an instrument that was worthy of his talent.”

At the time, Carlton was well known for his musical ability and had his own guitar collection. He and Sharon gave away one of their guitars to the talented young boy from Mexico, and a ministry was born.

Soon, Carlton and Sharon founded Guitar Dreamers, and later, Guitar Ministries with the goal of donating high quality guitars to needy churches, missions, prisons and orphanages throughout the world. A company based in Nashville (Music Instruments Reclamation Corp.) became one of their most valuable partners, providing them with newly manufactured guitars that had small blemishes or flaws that reduced their price from $1,000 each to about $300. The Joneses started buying as many as they could afford. They also repaired donated guitars and auctioned off others.

In total, Guitar Ministries has donated about 1,000 guitars, said Sharon. “It’s not just a blessing to the churches and the worship leaders who receive our guitars, but it’s been a blessing to us … just knowing how much happiness we are bringing to others,” she said.

During his travels, Carlton has seen musicians playing guitars that were literally falling to pieces, split apart and duct-taped together, instruments with strings that hadn’t been changed in years. “And some of those guitars were shared between two churches,” he said.

Over the years, Carlton and Sharon have made several overseas visits to personally deliver their guitars. They often visited churches to conduct guitar repair workshops or to lead music conferences, bringing several brand new guitars with them. When it was time to go, they would leave the new guitars behind with the church members, a surprise gift that always brought tears, smiles, laughter and hugs to everyone involved.

Churches that want to receive a guitar must fill out a special form online stating their situation and demonstrating their need. Carlton and Sharon carefully consider each request, confirming with the appropriate agencies that the need is real. Experience has proven that it’s risky to just send a guitar directly to a church in another country, so most are sent personally with friends, relatives or representatives of either Guitar Ministries or the church receiving the guitar. Every gift also includes a case, strings, capos, cables, picks and straps.

Guitar Ministries has attracted the support of other musicians as well. The Joneses have an extensive network of musician friends, including world-renowned guitarists like Tommy Emmanuel, Phil Keagy and Doyle Dykes, all of whom have performed fundraising concerts for the ministry. When Emmanuel first learned about their work, he sent a note to Carlton, saying, “You are changing the world — one guitar at a time.”

Sitting in his home studio, Carlton picks up a guitar and plays a few chords. The walls are covered with photos of famous and talented guitarists he has known, each picture with a story of its own. But in between anecdotes about Chet Atkins or Earl Klugh, he comes across simple photos that impress him on a deeper level.

He points to a picture of children singing in Haiti. In another is a choir performing in Mexico. And always … someone playing a guitar, guiding the music, spreading the Gospel … and yes … changing the world.

For more information about Guitar Ministries, contact Carlton or Sharon Jones. You can visit their website at www.guitarministries.com, or call (225) 936-0349. The couple also has written original contemporary Christian songs together.