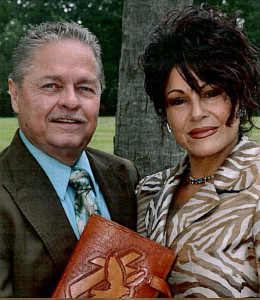 John and Andi Bayer are taking their Free at Last Prison Ministries to the next level.

For several decades the Baton Rouge couple has witnessed to thousands of prisoners across the state and nation, but now they want to reach every prison in America with at least one copy of a book they recently published, “Ministry from the Inside.” Russell Nestor, a man serving 35 years in a federal penitentiary, wrote the 250-page book by hand and the Bayers typed it up and had it printed.

“We believe God has a special unconditional love for inmates,” John Bayer said. “Great men of God, such as Peter, Paul, Samson, James, John the Baptist, Joseph, and Jeremiah all were in jail.”

“Men like David, Moses and Jacob were murderers, adulterers and thieves, but when they called on God and repented – God cleaned them up and used them mightily to advance his Kingdom forward,” Bayer said. “God is still calling inmates today – He still cleans them up and uses them in the ministry.”

The book, also called “A Christian Inmate’s Manual,” details topics such as: humility, honesty, forgiveness, joy and other Christian values, or, in other words, how to have a good testimony while in prison.

The Bayers printed 5,000 copies and have distributed 3,500, including 100 to the New Orleans Baptist Theological Seminary program at Angola.

“We only have 1,500 left and we now have a workbook to go with it but we don’t have the funds to get it printed,” Bayer said.

They’ve received high praise for the book from prison officials including Angola Warden Burl Cain who wrote, “This book is a MUST READ for any prison official and offender. Best guide I have seen other than the Bible. Teaches how to make it, deal with yourself, and rehabilitate morally.”

Tim O’Dell, director of Chaplaincy, for Corrections Corporation of America, writes that the book “is a practical guide to living out one’s Christian witness while incarcerated.”

Bayer said he’s already seen positive changes in the offenders who have read it.

“When you see Aryan Brotherhood men – the white gang – getting saved and loving the black inmates around them – when before they would kill them – only God could have done that in that man’s life,” Bayer said. “God is coming off the page and teaching them how to live.”

ONLY BY THE GRACE OF GOD

The Bayers, who are both ordained ministers, are approved to visit 65 prisons in 22 states, including the private Corrections Corporation of America (CCA), facilities.

They freely admit there is a special place in their hearts for inmates because, if not for the grace of God, they might be in prison. They both lived lives of crime, they said, but shortly after they were married in 1975, while watching a 700 Club television program, they received Jesus Christ as their Savior.

“When you live a lifestyle of sin, crime, mafia involvement, [and] the Ku Klux Klan, and you come from a life where you marry a girl with a heroin addiction [who] was a prostitute – and we got saved!” John Bayer declared. “Something took place in our life!”

“Those that have been forgiven much – love much,” he said. “That compels us to go!”

“The Lord put compassion in our hearts to reach back into where we came out of,” Andi Bayer added. “We could have been there – behind bars – but we didn’t get caught.”

They are asking the Christian community, especially the churches, for financial help printing and distributing 10,000 books and workbooks at a cost of $10 each.

“We are all the body of Christ and we should be working together,” John Bayer said. “God is doing something here. There is a great harvest of souls coming out from behind prison bars in these latter days.”

For more information, call John Bayer at 225-810-6108, or visit their web site at: www.freeatlastprisonministries.org