Jesus is the light we all seek just as the three wise men did during the time of Jesus’ birth. They sought light in dark world; that light, which is Christ, ultimately saved all of our lives. Jesus has given us that same power to create light in a dark world and it begins within us.

“It’s sometimes in our desperation that destiny is found,” says Joyce Burges. “Finding myself in a teenage pregnancy left little room for the future I had sought. While singing in a school choir I had been chosen to receive a scholarship to enter college, but that changed it all. My parents were disappointed, and I didn’t know where to turn. As I sat in my bedroom alone in July 1976, wearing my little brown dress, God proposed to me the gift of salvation. He said, ‘take a chance on me.’” That night Joyce found herself at the mercy of God and without hesitation accepted the gift of salvation.

“I had my son in October and married his father one year later.” Together with Eric Burges, her husband of 40+ years, she went on to discover how the light of Jesus Christ might be shared through their lives. Their story began here in Baton Rouge; wife of one husband, mother of five children, the early years proved to be conditioning them for what would lie ahead. With a large family and career goals aside, Joyce comfortably took on the role of motherhood.

“My children were my pride and joy; being their mom was a career I valued.” Joyce explains how in her darkest hour, God was light to guide them. “I received a call from my son’s teacher requesting a parent teacher conference to discuss his grades. In the meeting we were told that because our son’s GPA had gone from a 3.0 to 2.8 we would need to place him in another school. The words were hard to stomach, and my husband and I were heartbroken.” The Burgeses made the decision to talk to some of their friends from church for guidance. She explains how it was there in church that the idea of home schooling became a reality.

“A friend from church took us under her wing and guided us through the home-school process,” Joyce says. Shortly after, they began home schooling their kids. With research, the Burgeses soon got involved with home school conferences to help build their knowledge and also gain support. 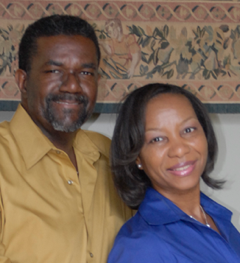 “We had great supporters. We turned to organizations like Home School Legal Defense Association (HSLDA) and Christian Home Educators Fellowship (CHEF), [and] these organizations aided the program financially,” Joyce says. National Black Home Educators (NBHE) officially began in 2000 and since then, NBHE has been a guiding light in the home-school process for those near and far. National Black Home Educators has partnered with businesses such as Barnes and Noble, local libraries, and churches across the country that support home schooling, and due to their work empowering parents and communities, the Burges family has been featured in numerous national publications and broadcasts.

“I believe if parents value the next generation, they will call for their children to do what they need to do versus what they want to do.” The key is to be involved, says Burges. She suggests being actively involved in your community and making education a priority in your home.

“For example when my kids were younger, I would have my boys round up the kids on our block and I would read to them,” Joyce says. “Churches could open the doors for tutoring on Saturdays, even just once a month.” Joyce and her husband have graduated all four of their children through home schooling and have designed a successful organization for promoting home schooling. Along with her contributions to education across the country, she has moved into the realm of politics, focusing on solving issues for the city of Baker.

“My goal as mayor is to increase morale in the community as we work together,” Joyce says. She has served as councilwoman nearly four years in the Baker community and now campaigns to represent the city as Mayor. She explains how her decision to serve the community was revealed through a conversation with God.

“After my youngest graduated from home-school God spoke to my heart, ‘Your work is not done yet,’ he said, ‘I want you to get involved more with your community.’” Joyce did just that; she received counsel from close friends and family, entered an election for council, and won. Just as her decision to home-school had been prompted by a dark situation, Joyce responded to the community’s needs and works to be a part of the progress.

In the words of Marianne Williamson, “It is our light not our darkness that most frightens us, and that we were born to make manifest the glory of God. So as we let our own light shine we unconsciously give others the permission to do the same.” Joyce and Eric’s contributions prove to be a light for their community and also the generations to follow.

“Create what you want to be,” Joyce says. “I am at my absolute best when I am creating. First in your mind, then make it a reality. When you are in a dark place, get around positive people, think on things that are lovely and are of a good report. Renew your mind by praying and reading God’s word and take it step by step.” We have the power to be a light in a dark world just as our savior. Jesus is light, but He has also shared His light that we might be inspired to become a light in our dark world.

“Let your light shine so that men may glorify your father in heaven.” – Matthew 5:16