“You’re not all in and I want you all in. There are also millions of people in America that believe in me, but they’re not all in either. I want you to do something about it!” Successful entrepreneur Michael Phillips heard these words from the Lord during his prayer time.

All In. Those two words began a movement that would turn into a ministry of national significance. Because those words were rooted in Revelation 3, Phillips knew God had called him to be a difference maker. “I know your deeds, that you are neither cold nor hot. I wish you were either one or the other! So, because you are lukewarm—neither hot nor cold—I am about to spit you out of my mouth.”

Living in intentional darkness is predictable. Yet, living an indifferent life of faith as a believer can be a subtle darkness that slowly sucks the joy and meaning out of being a confident child of God.

Deep down Michael knew his lukewarm faith did not please God. “That day, I woke up before everybody with this fire … knowing God had spoken. I had been visited.”

Phillips grew up in a middle-class Louisiana family who shared a love for hunting, fishing, and sports. He attended the University of Louisiana Lafayette for his first two years of college. Thinking back he laughed aloud, “My parents bought me a computer when I was 13. The first day, I took it apart. My parents just about lost their minds! But I put it back together and everything worked.” This was the start of his love for technology, and after studying computer science, he got a job in Baton Rouge that brought him back to LSU.

“When I graduated I didn’t want to work for anyone, so I started a small consulting company,” Phillips explained. “Within months I merged with another one. That is what became Sparkhound. We grew to 230 employees and I was there 13 years, running the company the latter six; I thought I would do that forever,” he smiled.

Michael had married Cheri and they started a family. Although they went to church, it was more a part of the schedule than an act of worship. “Then God moved us to get back into church,” he continued. “I was so caught up in running a company. We had two kids at the time, three now, [and] Cheri and I were struggling with all the busyness. Then on June 29, 2012, God just stoked my fire and woke me up.”

He recalled several months prior to the call when a bold act of obedience took them all by surprise. While out with his sons for donuts, Michael noticed a young man standing over a broken down truck and he offered help. “I thought maybe he needed a jump,” Phillips said. The man who had been there a while responded saying, ‘My engine block is overheated. If I get a bag of ice and pour cold water on the engine I’ll be able to crank it.’

Phillips was stunned; wrestling with God he prayed back and forth. He felt God was clear. Uncomfortable yet resolute, he was to be obedient. “Then the words came out of my mouth, ‘Man, do you see that truck? It’s yours. I don’t know why, but God has a plan. You are supposed to have it, no strings attached.”
The man stood in shock. “He got emotional, kind of broke down and then I broke down,” Phillips explained. There was little contact between the two after that. They handled the business aspect of it, but Phillips felt he had done what God asked.

Giving a truck to a stranger was a bold move, even for a man who’d been a Christian as long as he could remember. “I didn’t understand what being a Christian was until later in life. We were casual Catholics; my parents taught me right from wrong.” One day while hunting, he had a defining moment where he overwhelmingly realized the presence of God. He spoke out loud, ‘Thank you God.’ That was like a door opening that had he felt had been shut for years. Perhaps that moment was the seed that was fertilized as he was called into a life of surrender. After giving away the truck, he was on fire, knowing God had called him into ministry.

“All I knew is that God wanted me to be all in, and he wanted me to get other people to be all in. I had people come into my life like Corey Webster, Glenn Davis, and Buddy Roemer. I felt God was leading me to sell the business and go into ministry,” Michael emphasized. “We were making a lot of money and had three kids. It’s a scary thing when your wife asks ‘how is this going to provide for us?’ and you don’t have an answer.”

Cheri and Michael sought counsel from close friends and their pastor, and they eventually agreed that this was what God had called Michael to do. They started the All In Ministry Movement in October of 2012.

“My wife and I sold our stock and put the money into the ministry,” he chuckled. “My brilliant thought was that we would have enough time between January 2013 and January 2014 to have revenue coming in. Even though I’d set money aside, we needed 30% more right off the bat.”

Things soon got busy – Phillips and his volunteers spoke at youth conferences, reached out to churches, wrote sermons and small group studies, and challenged others to move beyond lukewarm faith and be all in, yet there were many roadblocks. “I would sit in front of a Methodist pastor one day and a Baptist the next. Some meetings went terribly, some great, but then nothing would come after 99.9 percent of them,” Michael recalled. Changing courses, the All In Movement stopped approaching churches and started going directly to people.

It was in another dream that God spoke clarity, “In this dream my wife and I are parked at a gas pump and I saw a red ice cream truck with a child shackled in the back. I jumped out and tried to save him. In a fetal position, he’s pinned against the wall. I couldn’t free him! It dawned on me that he is despondent, not struggling to be free. The truck begins to roll, I panic and jump out,” Michael explained. Weeks later, God revealed the meaning, “It was powerful. God showed me that the ice cream truck is The All In Movement. The child in the back is the American Christian. Most aren’t even struggling to be set free because they don’t even know they are captive. That is why the child was just despondent. Each person has to choose.”

That message is imperative, “We can no longer be lukewarm if we are going to stand for God and be the light of the world.” Still Michael needed help to do what lay before him. That’s when he met Fox News host, and former Arkansas Governor, Mike Huckabee. Michael had an idea, and when they met, Phillips got straight to the point.

“I went to him with my 30-second pitch. Something like, ‘We want to do a national day of service to show Christians what being a Christian is all about. Would you bring us on your show?’ The governor responded and said, ‘I will begin to work on that.’”

Three months later Governor Huckabee signed on as the event chair for “Do Good Friday,” and that became the All In Movement catalyst. Phillips was energized, “This was going be the thing that millions of people were going to do together; historic displays of authentic Christian behavior.”

That event was on Good Friday 2013 and though thousands participated, it was less than the millions the movement had hoped for. “We had some great things happen. But I’d built it into to something much larger in my mind,” Michael recalled. “At that point we were out of money, it had taken everything we had. I began doing consulting jobs to make ends meet.”
“I went through a time of frustration. My prayers were gut felt. ‘God, why are you giving me things that I can’t do?’” It was an uncomfortable season, as Cheri grew concerned with provision. “There were nights [spent] on my knees, crying.” In April things finally began to change and the technology began to evolve. “God refined our mobile app. There are 200 million people who identify themselves as Christian, yet we don’t see 200 million difference makers in the world everyday.” 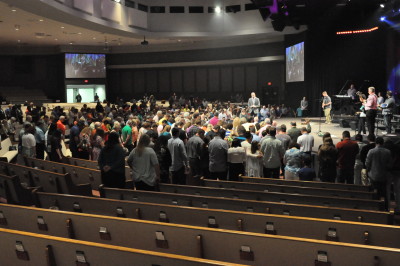 Michael continued, “Ephesians 4:11-13 says, ‘The body of Christ matures as each one serves His purpose.’ We believe we reach people by using something they use every day, their phones. This is how we reach millions. They will no longer be the despondent kid in the truck.” Phillips explained, “In our app we have projects from ministries all over the world; You care about children? Want to go on mission trips? To be trained as missionaries? To stop human trafficking? Use our app. The app makes it easy to make a difference! It also offers ministries an opportunity to become interactive globally. We’ve built an infrastructure and have 2100 people using it now.”

Michael’s faith in this mission is magnetic, “I’ve prayed about the funding: ‘God, you told me that you were giving me an ice cream truck. You didn’t say build an ice cream truck. I’m going to trust you.’” Others have realized this innovative opportunity and connections have grown into relationships leading to partnerships with The Jesus Alliance and Global Media Outreach, one of the largest evangelism efforts in the world.

Phillips’s message is consistent, “We’ve lost the object of our pursuit. We’ve made the American dream our pursuit instead of pursuing God. We’re leaving this world in worse shape for our children, and politics isn’t the answer. Our battle is spiritual. We need revival. We need the church to wake up and to roar!”

Helping the All In Movement is as simple as downloading the app (available on all major platforms), it takes less than a minute. You can look at featured projects and join the “Impact Team” by becoming a donor or volunteer. The more people involved, the greater the impact. To learn more about the All In Movement, visit www.moveallin.org.

“We need people to give,” Phillips emphasized passionately. “The All In Movement doesn’t receive support from large donors or organizations. Give a one-time gift, or give $7, $10, or even $100 dollars per month. Donate online. It’s easy.”

Things seem to be finally heading in a positive direction for the Phillips family and the All In Movement. Though they have momentum, they continually solicit involvement. “It’s been two years since I gave that truck away. The journey has been long, over three years. Yet, I am a different person than I was even six months ago. God has brought us through this. Most days now I live with a freedom that I wish that everyone could feel. Finally, a freedom from having to fear; I truly have a peace that you can only learn through the struggle.”

God is inspiring hearts across America to stand in the gap for Him—to respond to what is happening in the world, yet many Christians simply don’t know how to help, or where to start. Michael Phillips and the All In Movement and its wonderful app can help change that! Will you be a part of the response? Are you All In?