You may do everything you can to stave off those sluggish feelings that keep you from being productive throughout the day—you eat right, you get enough exercise, and you make sure you get plenty of sleep. So why does sluggishness follow you around constantly, wooing you even during daylight hours with temptations of a nap in a warm, comfy bed?

You could be experiencing jetlag, even without changing time zones.

“Our body is programmed to keep a natural schedule called a circadian rhythm,” says Dr. Courtney Peterson, a scientist at Pennington Biomedical Research Center. “When the body’s schedule is constantly changing, that tired feeling we experience is a miniature version of the same thing we suffer when we’re jetlagged.”

The good news is that you can train your body to feel less lethargic, says Peterson, whose research includes circadian rhythms and meal timing.

While a wide range of factors can contribute to feelings of exhaustion, there are a few simple tricks that allow you to work with—instead of against—your body’s natural circadian rhythm to increase the amount of energy you have throughout the day.

The first step is to forget the rule many of us adhere to about going to bed the same time each night, Peterson says. That’s because we need different amounts of sleep on different days, depending on how active we are and how many calories we’ve eaten.

“What you really should do is wake up at the same time each day and then go to bed when you feel tired. That will ensure that your body is getting enough rest,” says Peterson.

After a few weeks of sticking with your schedule, you may notice that it’s easier to get up in the morning and you may even wake up without an alarm clock.

Once you’re awake, the best way to increase your momentum and augment energy is to warm up the body’s temperature, which helps you feel more awake. Peterson suggests either taking a hot shower first thing in the morning or exercising, both of which will raise your body’s core temperature. 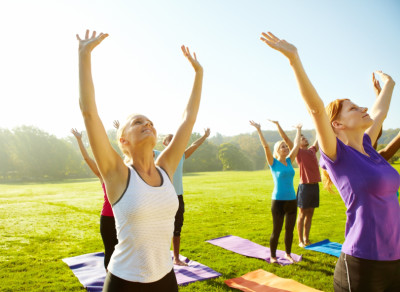 “Exercise triggers your body to switch to ‘wake-up mode,’” but it can be even more beneficial if you can get outside,” Peterson says. “Getting sunlight is key to setting your body’s internal clock to help you feel more awake.”

Peterson suggests most people need between 30 to 60 minutes outdoors each day. Turning the light switch on inside won’t cut it, since sunlight is at least 100 times brighter. Sitting near a window won’t suffice either, since windows filter out many of the rays of sunlight that your body needs, including the UV-B rays that your body needs to make vitamin D.

Peterson still suggests wearing sunscreen if you’re outdoors for longer periods to protect your skin. The good news, though, is the sensors in the eyes still pick up on bright light from the sun, which helps you feel more awake during the day and sleep better at night.

Once the sun sets, Peterson advises that some studies point to benefits of ending exercise an hour or two before bed. The reason is that exercise can heat up your core temperature and confuse your body into thinking it’s time to ramp up instead of wind down.

The next step is working to cut out something many of us are guilty of: screen time right before bed.

“Lots of screens on televisions, tablets and phones produce blue light, which tells your body it’s time to get going,” says Peterson.

You’re in luck if you just can’t cut out those screens, however. Apps and programs that change the color of your screens to a more reddish tint—and which cut out the blue light—are available, and Peterson herself uses them enthusiastically.

“For you to fall asleep, your core temperature needs to drop and your extremities need to warm up,” Peterson says. “For people who have trouble falling asleep, make sure your hands and feet aren’t cold. Maybe use a hot water bottle or heating pad on your hands or feet and then drop the thermostat to lower the sleeping temperature.”

Peterson suggests a sleeping temperature in the upper 60s, which will allow you to stay asleep and which can also improve the quality of your sleep, although the temperature at which people are comfortable varies.

What time you wake up and your body’s temperature can have a huge impact on your energy levels, but equally as important are the times you eat throughout the day, says Peterson. She brings up one study which suggests that in rodents, eating within the first eight hours of the day reversed diabetes and obesity, even on a less than healthy diet. Though the results are promising, we don’t know yet whether eating early in the day will also improve health in humans. Peterson is currently testing whether a similar meal timing pattern can improve metabolism in people.

“We think this research indicates that if you can eat your calories in an eight hour period every day versus a 12 hour period, your body will benefit from better blood sugar control, and that could potentially lead to weight loss and better overall health,” Peterson says.

Peterson is currently working on research to determine the benefit of eating early in the day to see whether it improves metabolism. Two of the perks are free meals made by dietitians at Pennington Biomedical for ten weeks, and compensation for participation. If you’d like to take part in this study, please visit www.pbrc.edu/healthierLA and look under the “nutrition” tab.