A quiet revolution is beginning to take hold in schools across the nation, a reaction to an avalanche of disciplinary issues including disrespect, rebellion and disregard for the well-being of others. Manners of the Heart takes a set of universal life principles and applies them creatively to a child’s world. The curriculum is based on the core concept that good behavior is not just a set of rules, it’s a matter of the heart.

“We do a lot of work to engage children’s imaginations because we believe that if you unlock the heart, the mind will open,” said Founder/Executive Director Jill Rigby Garner. “It’s an attitude of the heart that’s self-giving, not self-serving; it’s open hands, not closed hands; it’s what you give, not what you take.”

According to a 2013-2014-research study conducted by Southeastern Louisiana University, schools that implemented MOH saw a 28-30 percent reduction in discipline referrals. Teachers saw a significant decline in conduct problems and hyperactivity. They reported significant improvements in prosocial behavior including strategies to remain calm, influence others and react appropriately to unexpected situations.

Schools in the study gained at least 15 points on their school performance scores. Significant gains were reported in academic achievement measured by standardized test scores and report cards. In addition to five-day-a-week instruction in the classroom, MOH offers Professional Educator Development, and Professional Parent Development. “Throughout the years, time and time again, a principal will say that they’ve witnessed as much change within their faculty as they did with their students,” Garner said. “It’s changed all of us.”

Manners of the Heart has also blossomed into popular parenting books penned by Jill including: “Raising Respectful Children in a Disrespectful World,” (with small group study guide) and “Raising Unselfish Children in a Self-Absorbed World.”

“I really believe Manners of the Heart is my mother’s legacy,” Garner said. Her mother, Evelyn McDonald, grew up in dire poverty outside of Natchez, Miss., in a home with five daughters who used tree stumps for chairs. She walked along the railroad tracks into town, past white-columned antebellum mansions and dreamed that one day she would have a little girl who would become a “lady.” Although she didn’t have money, she was equipped with respect and compassion. She knew how to behave in ways that honored the people around her. In other words, she had manners.

“Sometimes when you’ve come out of the most difficult circumstances it will either harden you or it will soften you,” Garner said. Her mother’s combination of hard work, self-discipline and compassion made an impression on her children.

“I started out life in the playpen of a diner where she was working” [in Vicksburg], Garner said. Her father left when they discovered she was pregnant. Garner and her mother moved into a rented room above the Downtown Vicksburg diner.

“She would come down and open the diner for breakfast at 4:30 a.m.,” Garner said. “They took a table out of the corner booth, put a playpen in it and called it the princess booth. Mother would do the breakfast shift, then go down the street and work at the furniture store all day, then come back and do the supper shift.”

“When school started and report cards came around, she always looked at the conduct first. If there was any tiny mark, we had to go to the school and talk to the teacher,” Garner said. “More times than not she didn’t look at grades. She was most concerned about your conduct and who you were, [and] how you treated others, because she firmly believed if you could get that right everything else would take care of itself.” 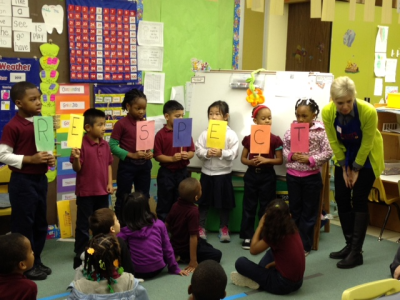 Garner grew up to marry her college sweetheart, a physician, and moved to Baton Rouge. It was the height of the self-esteem movement, 1986-1987, and parenting books were coming into vogue. Garner filled her mind with the idea of empowering children, giving them choices and allowing them decision-making authority.

“When the boys were in first grade, we went to a little birthday party,” Garner said. A friend called the next day to say her boys were out of control. “She said, ‘Because I love you so much, I have to tell you that if you don’t get a grip on those boys they’re going to be in jail before they’re 10 years old.’”

Heart-broken, Garner decided her friend was right. “I radically changed the way I was raising my boys and of course quickly realized that if I do all the things my mother told me, maybe we’ll hit on a good thing,” Garner said. “I didn’t want to squelch their personalities but we learned that respect for others is what comes first.” Then, at their principal’s request, Garner took on the out-of-control cafeteria scene, teaching considerate behavior through table manners.

The summer between her sons’ fifth and sixth grade years was life changing. After her husband left to start a new life, she remembered her childhood prayer to become a missionary. With the belief that God would correct her if she kept moving, she continued to teach Bible studies and served on the worship team at First Presbyterian Church. She asked God to make his direction really, really clear.

After seeing a Woman’s Day article on the decline of manners, she combined her interior design background and school experience to promote her ideas to the National Education Association. It was a step of faith. Whereas many people ask God to open doors, her prayer was for God to close opportunities that were not appropriate. Schools began to call.

“Up to this point we’ve been in at least 900 schools around the country,” she said. This year, with the support of East Baton Rouge Parish School Superintendent Warren Drake, they started the curriculum in 15 schools in EBRP, with a plan to be in every local elementary school within the next two years. The five-day-a-week curriculum is most successful when classroom teachers provide the instruction and guidance counselors reinforce it. The EBRP school board funds part of the curriculum, individual schools provide a small percentage, and the rest is raised by her nonprofit. First Presbyterian Church, which offers space for local nonprofits, has provided room for office and production needs. The arrangement allows all donations to be used for materials, Garner explained.

Garner currently spends significant time traveling to promote the curriculum, and speaking to Christian women’s groups. She is married to Nick Garner, who insists that MOH must remain her first commitment.

Garner describes her life experience as God’s funnel. “God keeps pouring into your funnel – the good, the bad and the ugly,” she explained. “The reason God’s doing that is so that it all comes out into one place” – your life’s purpose. Garner has appeared on the CBS Early Show, CNN, Focus on the Family and more than 350 radio shows across the country.