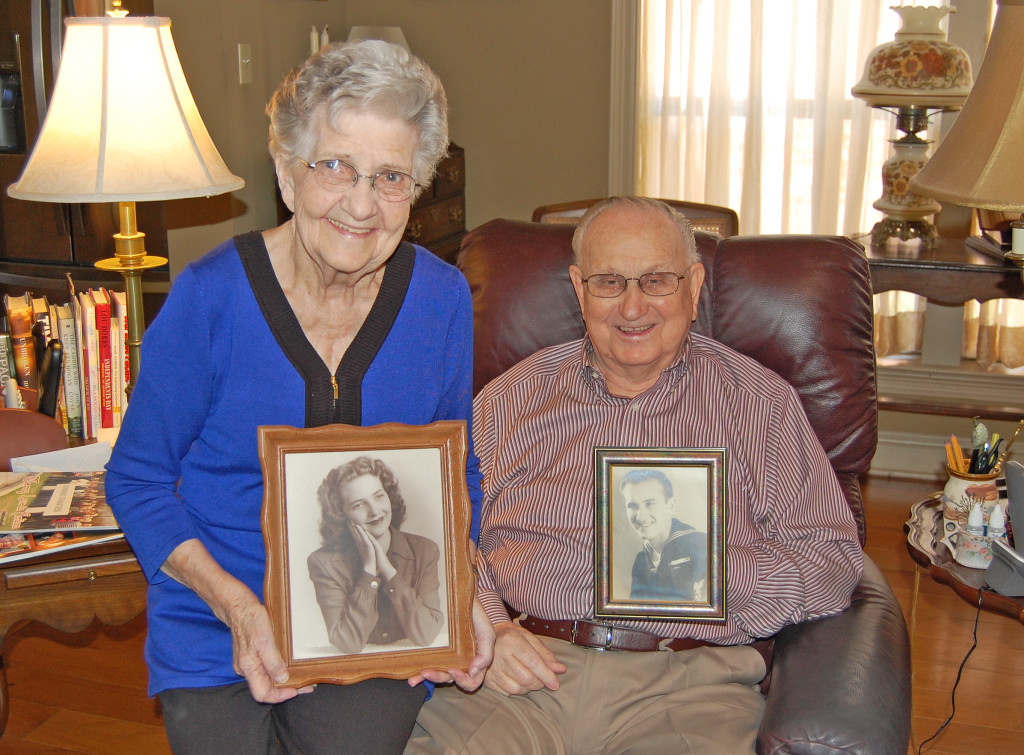 J.O. “Duck” Greer was sitting on his front porch one afternoon when “a pretty little girl carrying an umbrella walked by,” he said.

He called to her and even whistled, but she paid him no mind, crossed the street and kept right on walking.

He was 22 years old and full of confidence after serving his country in the U.S. Navy during World War II. Like many young veterans, he bought a motorcycle when he got home.

“One night I was riding down Choctaw Drive and hit a big pot-hole and flipped and ended up in the ditch with the motorcycle on top of me,” Greer said. “I got it out of the ditch and rode it home. In the morning I couldn’t get out of bed.”

A doctor diagnosed him with a  broken sternum and taped his chest so tight, “I could hardly breath,” he said.

“It was bad that I wrecked my motorcycle. It was so bad that I could not work,” he said. “I sat on the front porch — what else could I do?”

Bessie Mae Russell, then 19, had moved to Baton Rouge from Mississippi to work for the State of Louisiana in the department of finance. She was renting a room from Duck’s neighbor, who called him one December day to come meet a girl who needed a date for a Christmas party hosted by Gov. Jimmy Davis.

“I didn’t realize he was that same person (on the porch) until that night,” Bess said. “We played cards, had a nice little visit and we ended up going to the big party. And six months later we were married.”

“You’ve heard of love at first sight — I believe that,” Bess said with a twinkle in her blue eyes. “I never dated anybody after that.”

A Long Life Together

Jasper Oswald “Duck” Greer is now 90, and Bessie Mae Greer is 88. On Valentine’s Day Sunday they were honored by Istrouma Baptist Church for being the church’s longest married couple. On May 29 they’ll celebrate their 69th anniversary.

Duck grew up in Baton Rouge and graduated from Istrouma High School in 1942. He got his nickname when he was pitching in a boyhood baseball game and the batter hit a line drive.

“My brother, who was catching, yelled ‘duck!’ so I did and got hit right on top of my head,” he says with a laugh.

His father died when he was 10, leaving his mother to raise nine children. “How she did it, I don’t know,” he said.

Duck had an uncle who was a plumber and he assisted him after school and on weekends. When he enlisted at 17, the Navy in its wisdom made the plumber a mechanic in the engine room of the seaplane tender, the USS Pocomoke AV9. The ship followed many of the Pacific island invasions supplying the troops and maintaining the seaplanes.

Bess grew up in Monticello, Miss., a middle child with an older sister and brother and a younger sister and brother. She graduated from Silver Creek High School 1945, then attended Southwest Mississippi Junior College. She came to Baton Rouge in 1946 to work for the state.

“I became a Christian when I was 12 years old,” Bess said. Her family attended a little country church. “It was during a revival when I got saved and I was baptized in the creek.”

They were married by Dr. A.E. Pardue in Duck’s uncle’s house and began attending Istrouma Baptist. She went forward during a revival, “when I really became a Christian,” she said.

Duck attended Istrouma Methodist as a youth on Sunday mornings then began attending Istrouma Baptist with some of his friends on Sunday nights because, he said, there were a lot of pretty girls there.

“One morning service I went to Istrouma Baptist and gave my heart and life to Him,” he said. “Brother Sam Rushing baptized me that night.”

The couple has served in every single Sunday School department from Primary to Senior Citizens over their decades of membership, Bess said.

After they were married Duck continued his career as a master plumber. He was on a crew building the Baton Rouge General Hospital when he was blinded in a freak accident. He was ‘seating’ a commode into the floor by pouring a mixture of boiling hot lead into a bed of sand when moisture in the sand exploded and splattered hot lead up into his face and eyes. He was blind for several weeks.

“I had to go home blind to a wife and a couple of babies,” he said with sadness in his voice. “You feel worse than helpless.”

Three different plant jobs over the next three-plus decades provided good income but not much job security thanks to plant closings.

Bess retired from the state in 1985 and he retired a year later. They enjoyed retirement by vacationing with friends, attending lots of LSU football games and caring for their home and growing family. They’ve also both survived heart attacks. Age-related health issues are slowing them down.

So what’s the secret to a marriage that’s lasted nearly 70 years? What’s the best part and what’s the worst part?

“The worst part is that our lives get shorter and shorter,” he said. “The best part is I’ve got the best mate you could ever want.”

“And I feel the same way,” she says. “We’re very agreeable and we’re very much alike in many ways — it’s gotten to where we even think alike.”

“It’s just like Jesus gave his all for us,” she adds. “You give your all for that person you love.”