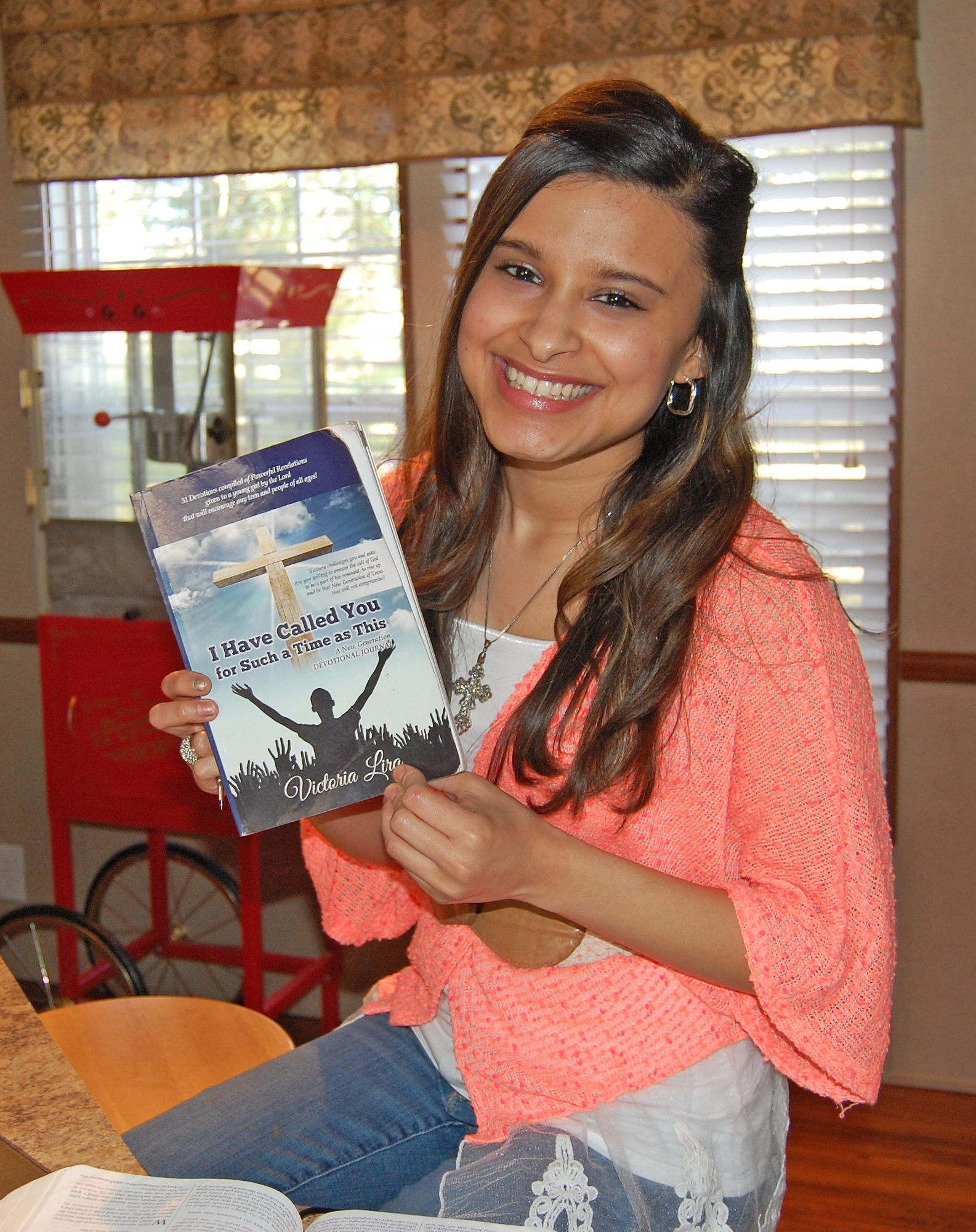 Victoria Lira sees so many similarities to her life as an American teen and what happened in the Bible’s book of Esther, that she titled her book of devotionals after Esther’s key passage.

“I Have Called You for Such a Time as This: A New Generation Devotional Journal,” is a soft-cover book of 31 chapters written in an easy, bright style.

As a minority Jew living in the pagan culture of Persia, Esther was chosen to be a queen, violated court protocol and saved her people from a genocidal plot. Her uncle Mordecai advised her, “Who knows whether you are come to the kingdom for such a time as this?” – Esther 4:14

“I definitely can relate to Esther because sometimes you feel like her in her situation — she was so young, but God called her to such a great task,” Lira, 17, said during a visit to her family’s home. “She had to save her people and she had to go before the king, but she couldn’t do that unless the king called her, but she knew that if she would have waited for the king to call her that her people probably would not have survived — so she had to go and step out in faith.”

“She (Esther) said, ‘God, I know this is dangerous but I trust you.’ She didn’t really worry about her own desires, she didn’t really worry about saving her own skin, but she said, ‘this is what God told me to do and I’m going to do it,’” Lira says with a big, bright smile. “Sometimes you may be scared to take that step out to do what the Lord told you to do but you just have to trust him — he will give you the courage just like he did her.”

Each chapter is based on Bible verses for each topic and feature titles such as “Jesus Hugs,” “True Beauty,” “Never Compromise” and “Rapture Dream.”

The “Rapture Dream” story is from a dream she had when she was 7 years old. She was in the clouds with her younger brother Joshua in what evangelical Christians call “the Rapture.”

That dream of going to Heaven was so powerful she wrote it down in a diary. Since then she’s composed hundreds of stories, devotionals and Bible lessons that fill a stack of hand-written notebooks.

Lira lives with her father and mother, John and Nancy Lira, and her siblings Joshua, 16, Isabella, 12, and David, 5, near Gonzales. Her father is bi-vocational, meaning he is a self-employed contractor who also has his own evangelistic ministry. He preaches locally and takes the family on mission trips several times a year to Central America. He also volunteers with Jimmy Swaggart Ministries in their prison ministry.

“I definitely get a lot of inspiration from my family,” Lira said. “How my Mom handles different situations with wisdom. Dad is really hard working, and he inspires me to work hard no matter how tired you are. Joshua is really bold for Christ.”

She’ll soon graduate from home schooling, taught by her parents, and while she isn’t sure exactly what’s next, it will be a ministry of some kind.

She felt a calling into the ministry several years ago, she said.

“We were street preaching with a church group in Mississippi and everyone was taking turns at the microphone,” she said. “I was at the back of the crowd and I felt this urge to go up to the front to witness to the people, and I thought, ‘Really, Lord, do you want me to go?’ I was, like, so nervous, and my Mom, who was back at the hotel room, texted me at that very same moment, and said, ‘Hey, I feel the Lord wants you to go and talk.’”

“The Lord had already spoken to me and then confirmed it through her,” she said. “I had no idea what I was going to say and I opened my mouth and the presence of the Lord just came over me and was speaking through me.”

She already ministers to teens via her social media sites.

“I was following this girl on Instagram and every day she would post stuff like, ‘nobody likes me’ or I’m worthless,’” Lira said. “I messaged her and shared Jesus with her and told her, ‘all that stuff you’re saying isn’t true because Jesus loves you and Jesus cares for you.’”

“Pretty soon she said, ‘You know, you are right, thank you for telling me that,’ and her whole – everything – changed,” Lira said with another big smile. “She started posting things like ‘Jesus loves me,’ and ‘I know who I am in Christ.’”

Lira is an outgoing and talented young woman who also plays the violin and is very serious about her relationship with Jesus and telling others about him.

“The Lord gave me that (Rapture) dream when I was small to show me that we’re living in the last days and now is not the time to mess around but now is the time to get your heart right with God, to be about the Father’s business,” she says with all seriousness. “Now is the time for teenagers and young adults to rise up to the challenge that God has called us to.”

“Jesus is coming back and either you are right with him or you are not,” Lira said. “Now is the time to do the Great Commission — to witness to as many souls as we can because we can’t take anything with us but souls and that’s what the Lord has called us to do.”

For more information about Lira family ministries and mission work:

* Listen to her radio show on: SoundOfTruthRadio.org

* Visit her brother Joshua’s website where he sells inspirational T-shirts to fund their family’s mission trips to Central America at: www.shopcrosspost.com