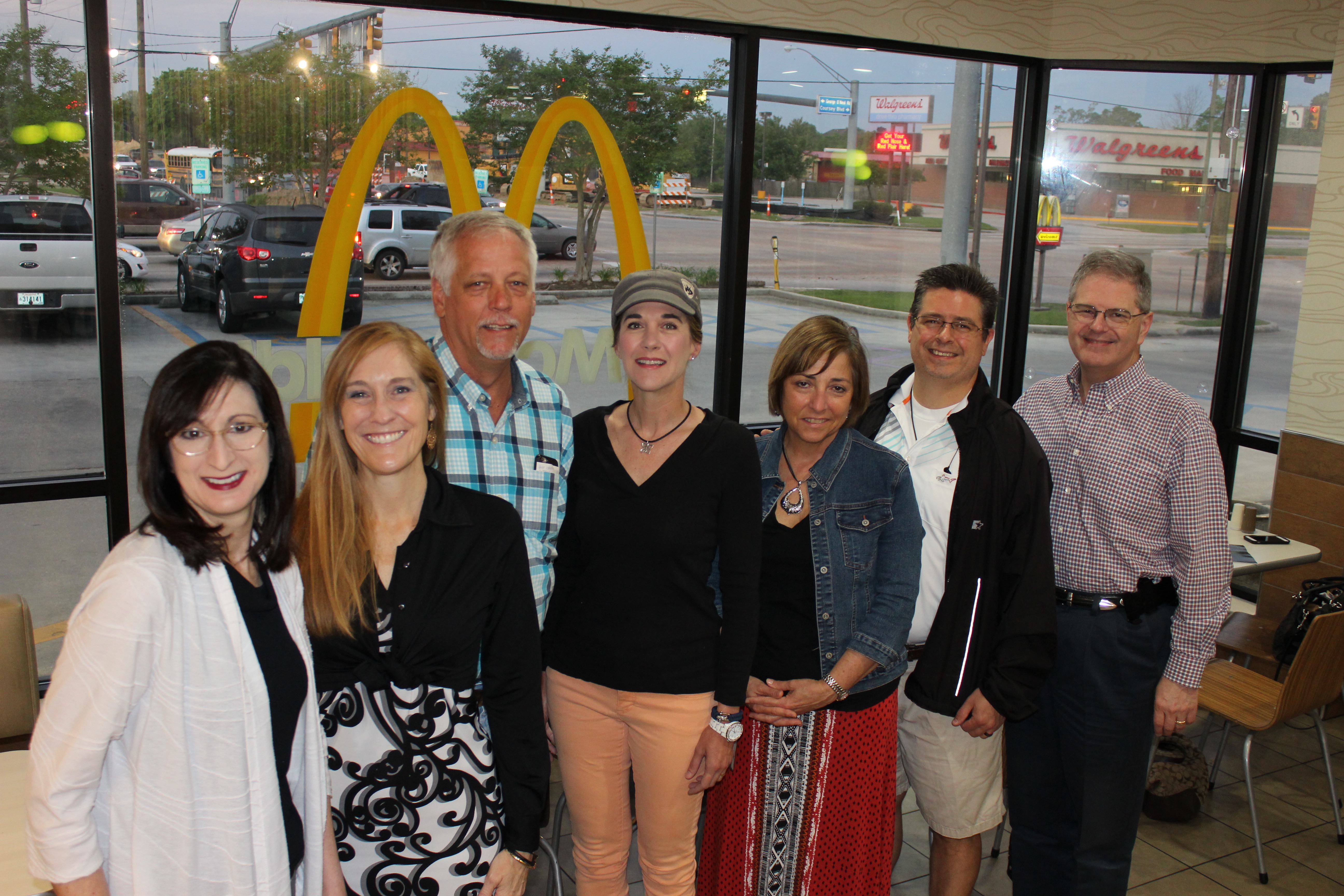 “Go ye into the world and make disciples of all nations … teaching them to obey everything I have commanded you. And surely, I am with you always, even to the end of the ages.” —Matthew 28: 19-20

On Wednesday mornings at the crack of dawn, teenagers from St. Andrew’s United Methodist Church are hitting their alarms, getting dressed and making their way to the Jones Creek McDonald’s for a weekly 6 a.m. Bible study. Yes, a weekly Bible study … at McDonald’s … at 6 a.m.

It’s certainly not traditional, but it’s effective and this particular group of high school students wouldn’t miss it for the world. The Bible study is led by St. Andrew’s the Rev. Darryl Tate, who used the same model when he was pastor at a church in Rayville, La.

“A young girl asked me one day, ‘Pastor Tate, if I bring some of my friends to meet you at McDonald’s one morning, will you feed us … not just breakfast, but spiritual food as well?’ That’s how it started,” said Tate. “There were five youths at that first meeting, and by the time I left Rayville, the group had grown to about 70. The ladies behind the counter would greet their customers, saying ‘Welcome to the Church of the Golden Arches.’”

As soon as Tate arrived at St. Andrew’s last summer, he worked with Youth Director Veronica Dudley to continue the McDonald’s tradition. The group is growing fast here in Baton Rouge, and includes students from at least five high schools, including Parkview Baptist High School, Catholic High, Runnels and St. Joseph Academy. Kids begin arriving as early as 6 a.m. and can order whatever they want for breakfast (St Andrew’s covers the cost). As they drink their coffee and unwrap their sausage biscuits, they prepare to hear Tate’s message.

Smiling and soft-spoken, Tate begins with Scripture and a discussion of biblical lessons and how they can be applied to real life. Next is devotional prayer, in which the teenagers share their concerns and special intentions. “Some ask to do well on a test,” Tate said. “Others pray for their parents’ health. One young man recently asked us to pray for a friend who had died of a drug overdose.”

Many of the young people at St. Andrew’s attend different high schools across the city, so the Wednesday morning meetings allow them to reconnect during the week. “I like seeing my friends from church,” said Chapman Cooper, a senior at St. Joseph Academy. “We can share what’s going on in our lives and hear Scripture together. The messages we hear are positive and help us deal with the day ahead.”

Heath Moser, 16, agrees. The Runnels student said he finds the McDonald’s meetings encouraging and refreshing. “It centers you,” he said. “It helps you focus your mind on Christ and how you can be a better person and an example to others.”

Tate has a strong connection with his young audience. He gets emotional when asked why ministering to youth is so important to him. “I’m filling a void,” he said. “Young people are falling away from church. Only 25 percent of them go to church anymore. If we don’t gather them and nurture them, some other entity will grab them and set them on the wrong path. We have to be flexible. Because of the life our young people are living today, there have to be different entrance points for getting them connected to the life of the church.”

The Wednesday morning gatherings draw parents as well, many of whom take seats at nearby tables while they wait to take their children to school. Beyond those tables, customers drift in and out, listening to Tate’s message.

Tate has similar Bible studies with at least four other groups, held at several CC’s Coffee House locations in the city. Clearly, he is willing to go the extra mile to build relationships, minister to others and share the Gospel. In essence, although he leads a church of about 1,200 people, he is also willing to take church directly to the community.

Evangelism has been in his blood since he was 12 years old and accepted Christ, he says. He knew that he would one day be a pastor. At 15, he was teaching Sunday school. At 17, he was already a minister and was sent to St. Martinville to help restore a church that had only three members left. Originally from New Iberia, Tate went to LSU and studied business administration, then theology at Fairfax University. Later, he attended Southern Methodist University’s Perkins School of Theology and earned his master’s of divinity. Over the years, he has led churches in Donaldsonville, Lafayette, New Orleans, Plaquemine and St. Martinville.

Aside from youth ministry, Tate is also deeply committed to disaster relief. For eight years, he served as president and CEO of the Louisiana Disaster Response team for United Methodist Council on Relief, which eventually helped rebuild 125,000 households destroyed by hurricanes Katrina, Rita, Ike and Gustav. Those years revealed some very important truths, he said.

“In times of disaster, all the walls melt away,” he said. “No matter what denomination you are, it doesn’t matter. When we truly need each other, we all become the body of Christ.”

For now, Tate is focused on St. Andrew’s, which has proved to be a good fit for his personality, skills and leadership style. “My heart has always been to be a pastor,” he said. “To help the least, the last and the lost. I believe that you have to work at building relationships, that you have to bring the light of Christ to people by setting a good example, and that if you give people spirituality and hope, you can make a real difference in their lives.”