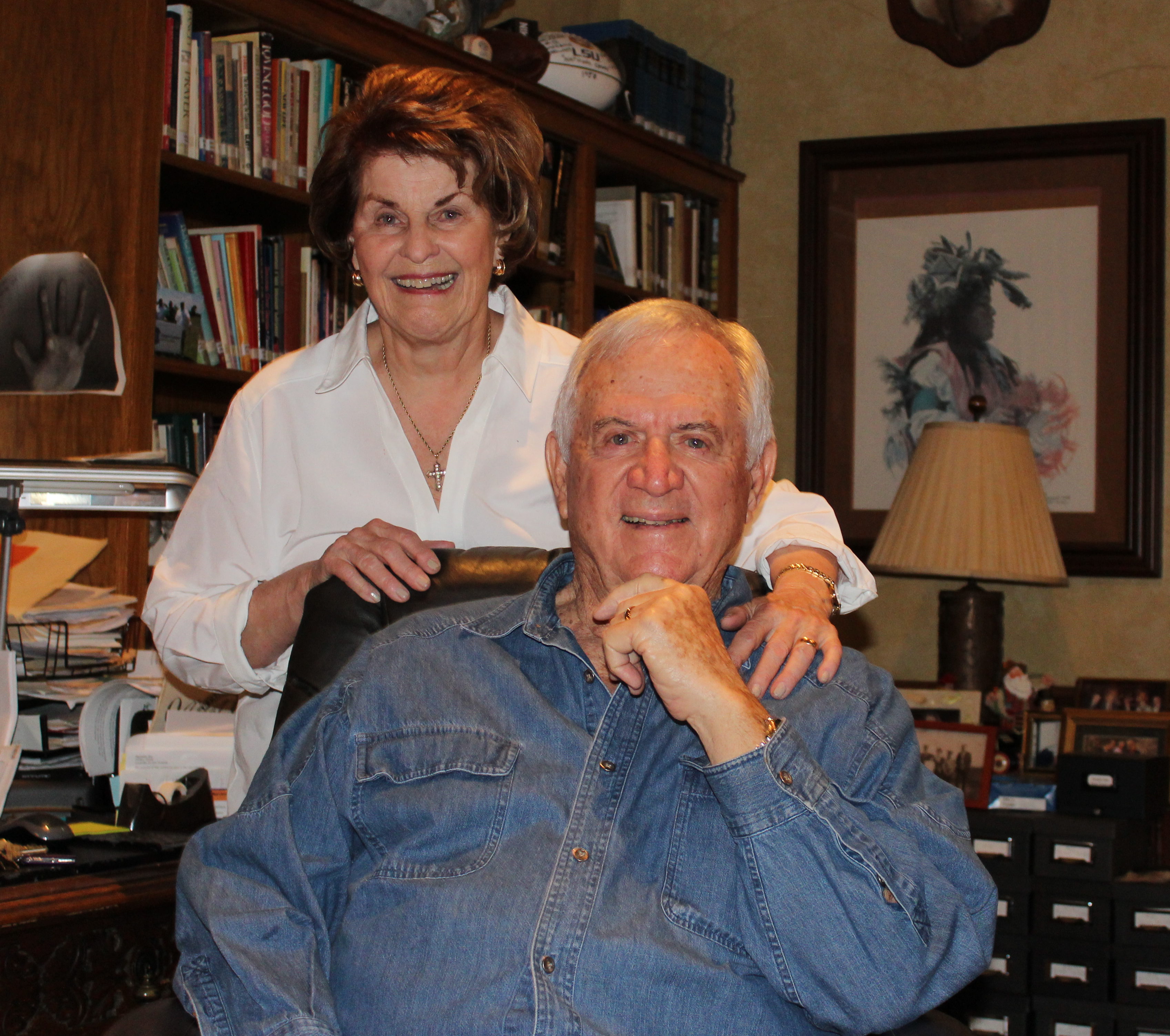 It happened with lightning speed. The bull had a reputation for flinging cowboys off his back in record time. But the self-described arrogant Texas A&M rodeo champion thought the bull had met his match. Donald Tabb was headed for a “one second conversion.” The life change would land him on the Billy Graham crusade team, and eventually, in Baton Rouge to become founding pastor of the Chapel on the Campus. He has since become widely known for his phenomenal command of scripture and commitment to multiply Christ’s kingdom by investing in others: a rancher turned shepherd.

But first, he had to come face to face with the idea of his own mortality, in the face of a bull known as “Vern Elliot’s 33.” “He was a very wiry bucker and would come out, spin about five or six times to the left, then he would reverse his spin. That’s usually when he’d get everybody, on that reverse spin,” Tabb explains. “I had broken my shoulder the week before at a rodeo in Waco. I had it in a flexible cast and I couldn’t throw up my arm, and I lost him at seven seconds.”

That was only the beginning. When the rodeo clown was unable to get between Tabb and the bull, “Vern Elliot’s” attacked. “He hooked me and he tromped on me and he butted me and he rolled me around like a rag doll,” Tabb says.

“Well, that night, I’m lying in bed feeling very, very sorry for myself. In a sort of semi-conscious moment I thought, ‘Where would I be if that bull had stepped on my head?’”

He suddenly recalled a verse of scripture that his college roommate, Jack Frey, had tricked him into memorizing two years before: “And this is the record, that God has given to us eternal life and this life is in his Son. He that has the Son has life and he that has not the Son of God has not life.’ (1 John 5:11, 12). “It just sort of popped into my head like a neon sign – bing! And I said, ‘Well, God, that’s what I want.’ And I went to sleep,” Tabb says.

The next morning, as he was walking through the Texas A&M campus, a Gideon handed him a small, green New Testament. He read it from cover to cover. “When I got to the end, it said, ‘If you want to become a Christian, pray this prayer,’” he recalls. That was December 7, Pearl Harbor Day, 1952.

“God puts up road signs, here, there, everywhere, by the word of God,” Tabb explains. “Two elements that will radically change your life, equip you to be who God wants you to be, fulfill his command, [and] accept his calling are to spend time in prayer and hide his word in your heart.”

At critical points in his life, God sent people who took God’s word and their own commitment seriously. In their “last fling” before entering the army, Tabb’s roommate talked him into exploring a Christian conference in California.

“I was confronted by some real heavyweights in the Christian world with the proposition of following Christ, and it made a deep, deep impression on me,” he says. Among those heavyweights was Dawson Trotman, a lumber worker and founder of The Navigators. Trotman was drafted by Billy Graham to design a system for teaching local leaders to disciple the enormous number of people coming to faith through his crusades. After two years of intense service as an airborne ranger in the 82nd Airborne division, Tabb joined The Navigators in Colorado Springs, Colo.

Then, tragedy struck. A seven-year drought devastated the cattle business in Texas, including the 55,000-acre ranch owned by his stepfather. Already suffering from cancer, his stepfather committed suicide in 1957. “I sort of got mad at God and said, ‘If you’re going to play that way, I’m picking up my marbles and going home,’” Tabb says. He left The Navigators to return to the cattle business.

“I lost money in every phase of the cattle business. God was not going to let me run,” he says.

In the meantime, God had brought him a gifted, steadfast partner – a fellow Navigators worker – Mary Alice Noyce. They planned a large, elaborate wedding – that didn’t happen.

“I got altar-falter, chickened out,” he says. “But due to my marvelous persuasive powers, I talked her into coming out to Texas about eight months later, and we eloped.” “She’s been the dominant praying, loving factor in everything,” he says. Both took seriously Jesus’ mandate to encourage and disciple other people.

After a brief stint as pastor of the First Presbyterian Church in Seymour, Texas, he worked for the Methodist Foundation, and then managed Lost Valley Ranch, a Christian guest ranch in Colorado. He was invited to work with the Billy Graham team in 1965. He began seven years of counseling and follow-up training for the crusades, including a stop at LSU’s Tiger Stadium.

But life on the road took its toll. He was home only three days a month while Mary juggled family life and her career as an English instructor.

“My wife, as you know, is a very unusual person. She taught at LSU for 27 years but in addition to that she raised five children – born from 1960 to 1978. It’s more her story than mine,” he says. “The tip of the spear sometimes is what nicks the flesh, but the shaft and the head of the spear and the base and all of that, well, that’s been my wife.” After living in cities from New York to California, he and Mary chose Baton Rouge as their home base, with airline access to wherever the Graham Crusade traveled.

“Considering that I was gone all the time I began to pray, ‘Lord, do you want me to trample those that love me the most to get out and save the world?’ And I kept getting this kind of reverse missionary call.” In July 1972, he received a call to help start The Chapel on the Campus.

He was ordained for the ministry at The Chapel on Fir Hill in Akron, Ohio, a large, interdenominational church.

“We were sort of pioneers,” He says. “I’d always believed that if you really wanted to be used of God, just go where the Spirit is blessing.” The flood of people newly committed to Christ in the local Billy Graham Crusade presented a dilemma and an opportunity.

“People were all jammed up in the Protestant-Catholic controversy. Somehow, I believed that our church was instrumental in bringing that down … I just happened to be in the right place at the right time,” he says. “There were a lot of independent churches started all over the city as a result of The Chapel on the Campus.”

“For some reason the Spirit of God hit a nerve and we grew exponentially,” Tabb says. “Three years later we had 1,500 people in the Chapel, and then we discovered that we could petition LSU for property on the lake that had been designated for religious organizations.”

After 30 years, Tabb stepped aside to become Pastor Emeritus and to support Senior Pastor Dr. Dennis Eenigenburg (2001-2011) and current Senior Pastor Kevin McKee. He continues to teach at The Chapel, travel and invest in future leaders. He has helped plant new churches in Lafayette, LaFourche and Covington, and has opened the Jabez Foundation, which provided some 38,000 meals to police, doctors and helicopter pilots after Hurricane Katrina.

“The key to growth, the key to fulfilling the Great Commission of Christ is to disciple believers at home, at work, everywhere. ‘And the things that thou hast heard of me among many witnesses, the same commit thou to faithful men, who shall be able to teach others also,’ (2 Timothy 2:2). Whether you feel you’ve been called or not, you’ve been commanded (Matthew 28:18-20).”

Most importantly, he says, do whatever it takes to memorize the Word of God. “Get you a plan. The secret is review. Use it, then you won’t lose it. Have the word where the Spirit of God can call it to your mind anytime – as you go.”