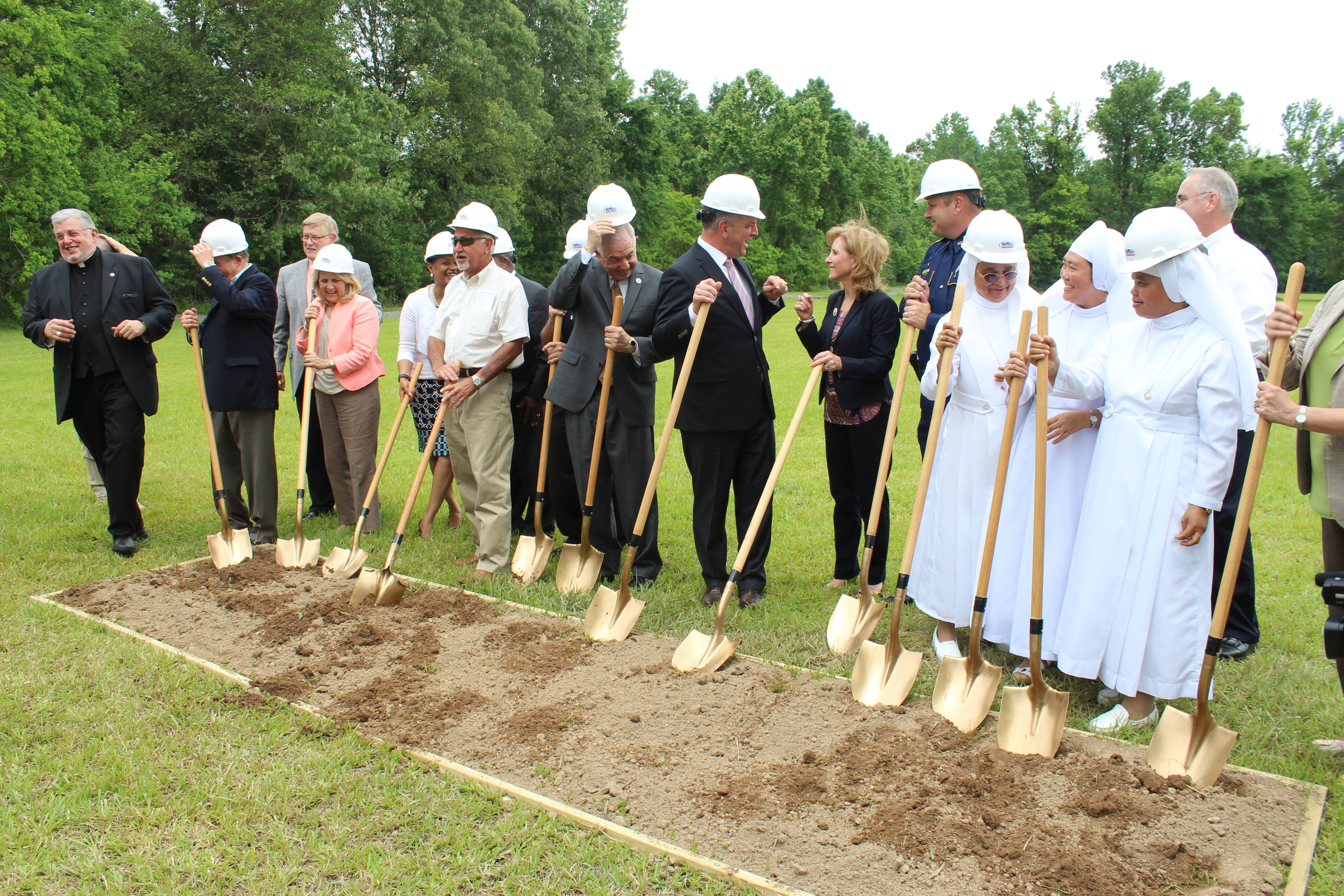 The bus was filled, the police escort in place, and the location secure. The elite gathering of some of the biggest names in Louisiana politics, law enforcement, business and church culture was not about bragging rights, but about addressing a devastating need right here in our city. A necessity to band together to fight one of the largest problems in our own backyard: human sex trafficking.

Recently elected Louisiana state Gov. John Bel Edwards was one of several to take the podium during the groundbreaking ceremony at the future site of Metanoia Manor. It may seem odd to see an elected government official standing arm-in-arm with a man of the faith, but the importance and strength of such a partnership was evident. It was a sentiment strongly supported by all in attendance, including District Attorney Hillar Moore who says, “There is no doubt how necessary this is.”

Edwards stressed this point saying, “This is an example of how the state can partner with the faith-based community to make a difference in the lives of so many people.” He continued his speech emphasizing that the majority of the victims of human trafficking are our most vulnerable citizens. “These children are being used as objects, most often not by strangers, but by [those they know]. It’s an unfathomable act happening right here where we raise our families. We have to have facilities like this. This program is needed. Our children need us to stand up and protect them. Many times we talk about how our future is all about our children, and it’s true, but we can’t just say that and not act. I’m very proud of this partnership. Getting this far has not been easy; there are lots of roadblocks out there. I want you to know how proud I am that the state government is not going to be one of those roadblocks.” In a private conversation following the speech, he said he wanted to stress to the faith-based community just how important it is to join forces and work together to support programs like these in our city.

Sen. Ronnie Johns, who is also a board member of Metanoia Inc., says the legislature strongly supports the endeavors of the 501(c)(3) organization in opening Metanoia Manor – a safe and secure facility for juvenile survivors of human sex trafficking – right here in Baton Rouge. In fact, legislation passed allowing the privately funded project to move forward was just one of many legislative acts made over the years to place Baton Rouge as a leader in the movement against human trafficking.

The list of the Metanoia board of directors alone speaks to the importance of this cause and the strength of the fight against human trafficking in Baton Rouge. The senator is joined by Metanoia founder father Jeff Bayhi of St. John’s Catholic Church and Our Lady of Assumption Catholic Church, Lt. Chad Gremillion of the Louisiana State Police Department, Sharon Pol executive director of Baton Rouge Children’s Advocacy Center, attorney George Bayhi, the Rev. Leo Cyrus of New Hope Baptist Church, Michael McDuff of the Louisiana State Contractor’s Board, David Ferris from the Louisiana Attorney General’s High Tech Crimes Unit, Bobby Gaston from the Louisiana Sheriffs Association, Sheriff Sid Gautreaux, attorney Katherine Green, Assistant Chief Administrative Officer Gail Grover, and Dr. Roberta Vicari of Our Lady of the Lake Children’s Hospital.

The issue of human trafficking may be a big one, but Louisiana is willing to put its big guns into the battle against it. In fact, this has not just been an issue for the current governor. Louisiana State Police Superintendent Col. Mike Edmonson began speaking with former Gov. Bobby Jindal about making this a top priority here in Louisiana, and together they made sure the issue did not go unaddressed. In the past several years there have been more than 550 confirmed human trafficking cases in Louisiana. “They’re from all over. Right here in Baton Rouge, right here in New Orleans, in Alexandria, in Lafayette, in Lake Charles, and Shreveport, and Monroe and all the points in between. This is absolutely necessary for the victims who have nowhere to go,” Edmonson says. Lt. Chad Gremillion, who has just recently seen the rescue of two victims, one in Shreveport and one in New Orleans, wholeheartedly agrees.

In 2014, legislation passed that helped in training law enforcement to identify victims and protect them by asking the right questions and knowing the red flags. Training them in making a “rescue” instead of simply making an arrest. Sister Eugenia Bonetti, an Italian nun and coordinator of the Counter-Trafficking Office for Women and Children, played a large role in raising awareness of the issues by sharing her expertise – that spans across two decades and around the globe – with the legislators. In fact, it was a trip to Rome and Sister Eugenia that emboldened the vision of Metanoia Manor in Bayhi.

While in Rome in 2002-2003 for the television show he produces for a station out of Boston, Bayhi was introduced to Sister Eugenia by a friend, who at the time was serving as the U.S. Ambassador to the Vatican. Sister Eugenia is in charge of 250 nuns around the world who focus on the rescue of victims of human trafficking, as well as focusing on helping the Catholic Church provide better pastoral care for women forced into prostitution. Additionally, she appeared in the documentary “Not My Life,” was included in the Inside the Vatican “Top 10 People of 2007” list and won the International Women of Courage Award and the European Citizens’ Prize (as found on Wikipedia).

So when Bayhi led a small group of eight to Rome to investigate the possibilities of opening a facility for juvenile female victims of sex trafficking, she was the obvious choice as a “guide” through the world of human trafficking. Bayhi, Bobby Gaston, Ph. D., Suzan Gaston, Ph. D., Sen. Ronnie Johns, the Rev. Dr. Rodney Wood, Rebeccah Wood, Col. Mike Edmonson and Suzanne Edmonson spent their time in the fall of 2014 at the Vatican witnessing and participating first hand in the world they were about to embark on right here in our city.

For years, Bayhi observed what he perceived to be voluntary prostitution in Italy, but Sister Eugenia helped open his eyes to the dark truth of the sex industry. “I feel strongly that someone needs to make up for the sins of men. Men have made this mess, and men don’t need to sit by and let women clean up the mess we’ve made,” Bayhi says. He is quick to point out that this is not about sex. Human trafficking is a dark aspect of living in a culture that has so devalued human life that we view other humans only in terms of profit, pleasure or possession.

He goes on to explain, “When it’s not this it will be something else. What’s next? Will we be paying others to abort their children so we can sell their parts instead of having them pay us? This is our culture; there will always be something to fight. God always leads us where we never intended to go.” He says that asking, “Why?” is the wrong question. Instead we need to be asking “What?” and we just need to do it. “I grew up in a stable, loving Lebanese family [right here in Baton Rouge]. I cannot even imagine people being used in this way,” Bayhi says. “But I bear the responsibility for other men who, for their own selfish pleasures, engaged in this. We have to address it. What do we need to do to rectify this?”

Many in our state were introduced to the issue of human sex trafficking in our city through the efforts of another local nonprofit that focuses on these issues in our state, Trafficking Hope Louisiana. Through immense community support they launched a widespread awareness campaign and opened the first rehabilitation facility of its kind in our area for adult female victims, but the need is still greater than anything being met at this point.

“It is important that our community and state provide a loving home for girls under the age of 18 because there is nothing like this in Louisiana, or in the south for that matter. It is important that the private sector become involved through donations because the state of Louisiana is low [on funds]. What better than a partnership between the state and a faith sponsored 501(c)(3) to work on these problems? Because of serious counseling and substance abuse costs, the annual budgets need financial assistance. That, plus staffing a 10,000 square foot facility, is not cheap, especially with the cost of keeping these girls away from their traffickers who are losing thousands of dollars a week. By not taking state money, Metanoia will be able to develop plans that will make it possible to handle these girls like parents would,” says Dr. Bobby Gaston.

And who will be there to “mother” these girls? Who better than a handful of nuns from around the world who have each been called specifically to help with the task of rehabilitating trafficking survivors. The assigned sisters – from India, the Philippines, Madagascar and Nigeria – who prefer to stay out of the limelight and focused on the work assigned to them, may each be from a different area of the world, but they all share one very strong common bond in their hearts. The sisters carry a presence with them that is the absolute picture of “though she be but little, she is fierce.”

“The power the nuns carry is incredible,” Bayhi shares. “Through them we’ve seen the power God’s presence can bring to a situation.” These women fiercely love, fiercely serve and fiercely seek the will of the father in their dealings with the lives of these young girls who have been so misguided, so broken and so tortured by the world around them. When asked what it is that drew them in, they simply said, “God did.”

Local pastor and prison rights advocate Ashanti Witherspoon knows firsthand the harm of human trafficking, even in the church. The human trafficking department of the sheriff’s office found his daughter before she could get on the bus to leave. She had run away from home but was captured that evening. She had met a man who came to a local church with a traveling evangelist, and his charm drew her in instantly. “They said we probably almost lost her. Had she been able to catch the bus, we might never have seen her again, but the quick response of praying Christians and law enforcement stopped her flight. We were told that she might have been grabbed before the bus arrived at its destination,” Witherspoon says. Luckily, their story had a happy ending, but it proves a major point: no one is safe or unaffected by this issue.

It is still groundbreaking work surrounded by trial and error and compromise. A step-by-step journey in which the next steps may not be fully known yet, but no one is turning back. As bishop Robert Muench prayed at the ceremony he asked the Lord to, “Fill us with righteous anger and sacred passion to whole-heartedly combat [this]. Help us to be ministers of prayer and healing, peace and justice, for those adversely affected and to effectively overcome.”

For more information on the project or to donate to the Metanoia building fund, please visit the website metanoia-inc.org.