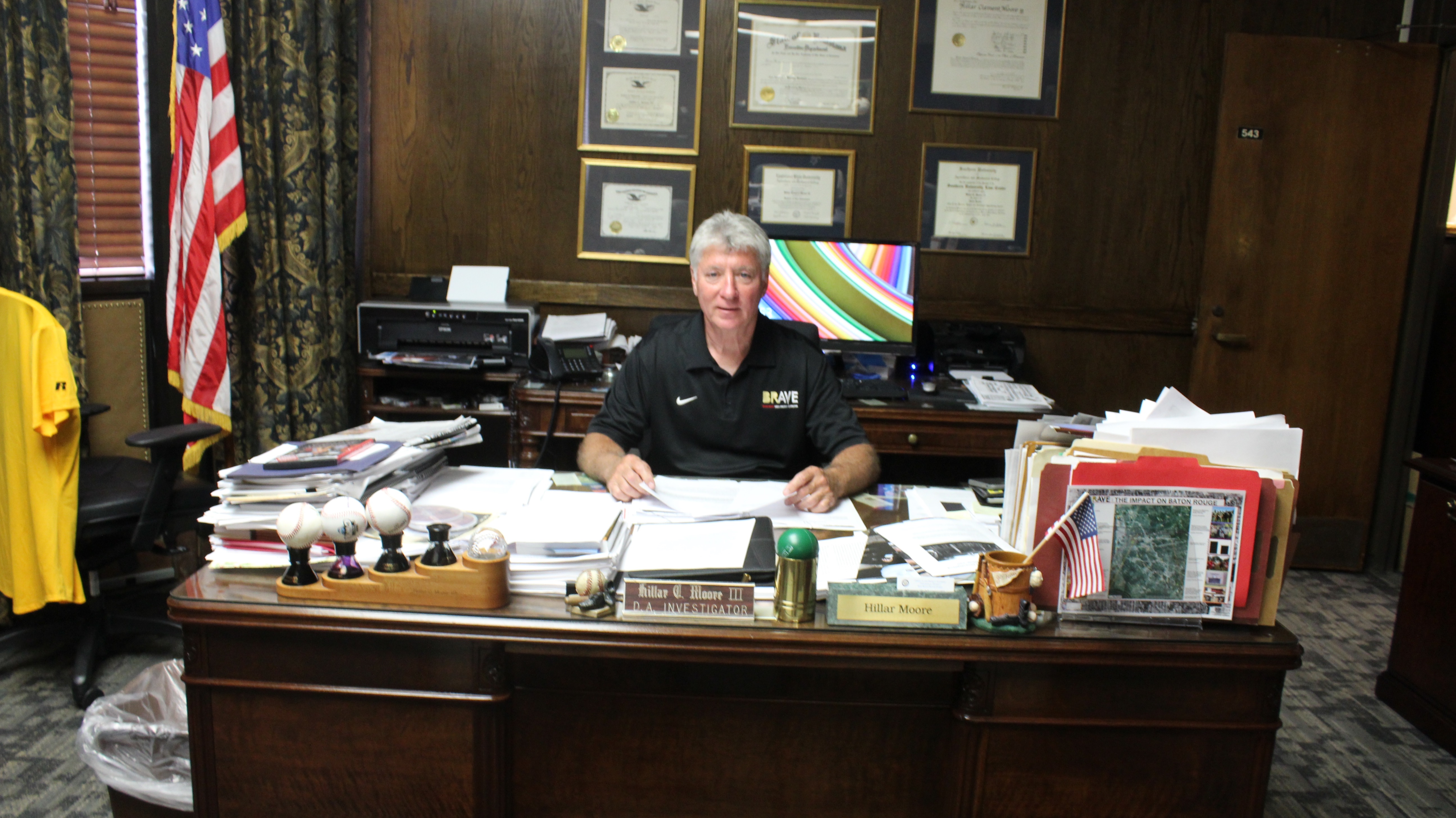 “The lack of family, lack of neighborhood, and lack of religion in communities is a significant hit to the fiber of our nation.” — Hillar Moore

“We have a killing problem. I’ve always wondered why people are killing each other and what we can do to stop that,” District Attorney Hillar Moore said. He had received a 4 a.m. wake-up call regarding another murder here in the capital city, so the determination was fresh and strong. “All of the studies I’ve read on how to stop the murders are complete nonsense in my opinion. None of them ever work, and they are all too complicated,” he said. So what has he done throughout the past four years to address this issue in a city that has one of the nation’s leading per capita murder rates? “It’s a 24/7 job. You can’t ever stop; you can’t ever rest. They’re watching, and they know the exact moment you let up,” he says.

Moore was born and raised in New Orleans, one of 7 children born to his Italian mother and his German-Irish father. “My dad was in the Marine Corps returning from WWII when he met my mom while she was running her father’s grocery store,” Moore said. The family was very involved in the Catholic Church and school system. He graduated from Brother Martin High School and moved to Baton Rouge to attend LSU, and his entire family followed him here shortly afterward.

For 42 years Moore has built a life in Baton Rouge, pouring his heart into the community long before his service to our city as district attorney. At 19 years old he became one of the youngest DA investigators in the country. “I was a volunteer student worker while getting my degree at LSU, and was hired here as an investigator after graduation,” he said. During his 11 years as an investigator he was in charge of crime scene investigation and forensics, which prompted his decision to go to law school. He became a defense lawyer working with Anthony Marabella (who is now a judge) and served for 16 years before deciding to run for DA in 2008.

“I’ve been doing this for 42 years. I’ve been on both sides, the defense side and the prosecution side. The value of seeing both sides makes it better for me. Every side has its black and white, but you can’t see it like that when you’re in the middle,” Moore said. In a city with an average of 88 murders a year, and everyone looking at him for answers, he made the decision to contact Dr. David Kennedy with the John Jay College of Criminal justice in NYC. Kennedy is the director of the National Network for safe communities and has implemented programs in cities around the country to strengthen community relations and reduce crime and incarceration rates.

“He had this program in Boston, ‘The Boston Cease Fire’ or ‘The Boston Miracle’ which incorporated religion and faith based techniques and was government sponsored. I called him and said, ‘We have a serious murder problem,’ he told me, ‘You probably don’t, but go ahead and tell me about it,’ and once I did he said, ‘You have a serious murder problem.’” Moore said. “We had to figure out where the killings were coming from. Luckily for us it was a ‘fixable’ problem when 54 percent of our murders ended up being group related.”

Moore explained the long process they went through to examine the files of every single murder over the past several years to find some sort of connection to work with. “We identified 32 working groups at the time, and began to institute call-ins (a technique in the group violence reduction strategy),” he said.

Through intelligence work, the most active groups and the most active group members are identified and contacted. LSU is a huge research partner, gathering and translating all data to be usable by these programs. “We send them a letter to come in, sit down and talk. Usually, they are on probation, have an upcoming court date or are in prison. We tell them to invite their mom, their girlfriend, their lawyer, and that they’ve been identified as an influential member and we want them to take a message back to their groups from us. Basically, the message is, ‘We will do bad stuff to you if you do bad stuff to us,’” Moore explained.

This is the 10th call-in over three years, and they have seen great success. “For the first call-in, 40 were invited and 37 showed up, plus 4 additional people who were mad they didn’t get a letter from us. It is a scripted message we give them from law enforcement. This isn’t a dialogue, it is us one-way talking at them, no questions and no talking back. This isn’t a negotiation,” he said.

Moore continued, “Basically we say, ‘It’s a new day in Baton Rouge. If you shoot and kill, we are coming after you. Put your guns down and take our help. I have 50 community service providers who will put you at the top of the list for resources, so transportation, rehab, mental health, school, tell us what you need,’” he said. “At that point most refuse our help, so our next option is, ‘Put your guns down, and you won’t have to deal with us,’ but we know someone is going to screw up, it’s going to happen, so it always ends with, ‘If you screw up you will be met with swift, immediate action by a lot of folks.’”

At this part of the call-in, responsibility shifts from the white law enforcement side to the black faith-based and community leaders to deliver the message, and they can deliver it in a way law enforcement can’t.

“These leaders get the message to them that we are all in this together. We may disagree on some things, but we don’t disagree on the fact that you have to stop killing,” he said. Moore highlighted that there is a huge distrust between both parties (law enforcement and the community), and that gap needs to be bridged. The program won’t be successful without it.

“This is the only program I’ve seen that encourages and pays for the faith-based side of the message. We ask preachers every Sunday to preach a message of non-violence, do community cleanups and step out of the pulpit and into the community,” he said. “LSU tracks everything we do – cleanups, gun buy backs, community meetings, etc., and crime goes down significantly 25-40 percent for 2-4 weeks in that (specific) neighborhood. After a call-in, the reduction is incredible with these group members for a significant period of time (up to 6 weeks). We can hear them on the prison phone calls, which are always monitored, spreading the message we just gave them.”

“During these call-ins, computer screens are set up showing pictures of the former gang members that are dead, pictures of bodies on the ground, pictures of who is doing 40 years and who is doing life. Maps show where the prisons are that they will be sent to if they are caught. The reality of it all is in their face,” Moore said. The first year the call-ins started, very few were taking law enforcement’s help, but more and more are now taking help.

“If they don’t take our help we reach out to their family, their brothers and sisters, that also helps,” he said. The first year they started with a baseline of 85 murders, which dropped to 58. “That’s 25 less people who didn’t get killed, but that also means 25 people didn’t go to jail for life,” Moore explained. The second year was down even farther, and although the third year spiked back up due to 7 double murders and 3 triple murders (events that Moore says make them “mad because those are numbers that go against the work we are doing”), it still managed to stay below the baseline. “All major medium cities are up, but we are doing good. We’re good,” he said.

But, since school let out last week, it’s “killing season” again in Baton Rouge and Moore said everyone is just holding their breath for what’s next. “When we aren’t doing call-ins we’re doing customized notifications. We know who is about to kill and who is about to be killed, so we try to disrupt their behavior as much as we can. Usually the response is, ‘Get out of my life.’ Hopefully, we will eventually get murders down, because it’s still not acceptable at 60 a year,” he said.

They’re currently on the right track — with an expected reduction of 5 bodies that first year, the start up of 25 set a good precedent. Moore said we have to address the issues creating an environment for murder in the first place including, “truancy, lack of education, teen pregnancy, high HIV/AIDS rates, mental health, poverty, historical racial issues, cycles of incarceration beginning as juveniles, no fathers and no mentors …”

His next plan is to gain support for a mentorship program involving veterans. “Often those who served have the same emotional problems these kids have, they’re all suffering from post traumatic stress. Maybe they can help each other. This is a dangerous group we’re dealing with at only 15 or 16 years old. These military men are disciplined and trained,” Moore said.

There are many programs offered throughout Baton Rouge, but each one faces its challenges when it comes to success. “You can offer these kids everything, but they don’t even know how to take it,” he concluded. Regardless of the successes and setbacks, one thing is clear; this is a community problem that can’t be left in the hands of few. There is a great forward momentum, so let’s all join together to keep going.