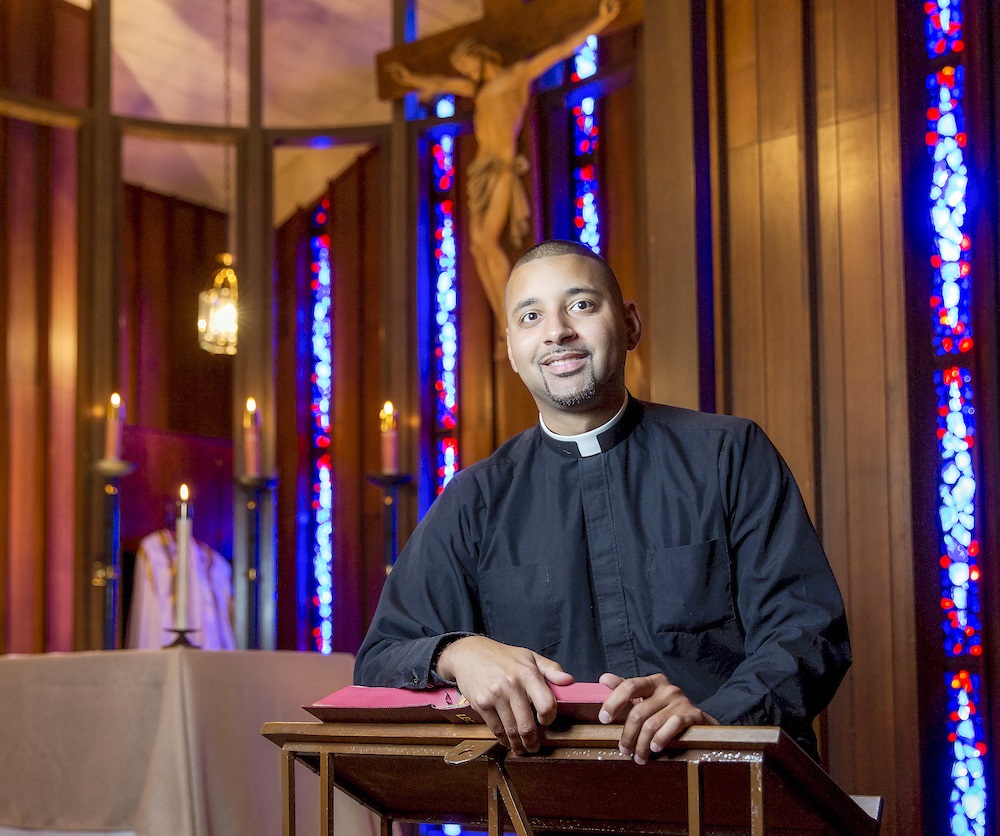 Father Joshua Johnson is not your typical Catholic priest. Still in his 20s, he has a unique gift for connecting with young people. It’s in the easy way he carries himself, the way he interacts with others, and the way he has used traditional and social media to spread his “faith on fire” message.

In today’s world, being connected means having an online presence, so google his name and you’ll find Father Joshua not just on radio and television, but on Facebook, twitter and youtube.

“You’ve got to meet people wherever they are,” he says, “and especially for young people, that means social media. You’ve got to reach beyond the four walls of the church.”

Until a year ago, Father Joshua was assigned to Christ the King Chapel on the LSU campus, and he easily blended in with the students who attended his Masses. It was there that he produced many of his “rap” videos aimed at teenagers and young adults. All are posted on youtube.com. On his Facebook page, he shares inspirational messages, and photos and information about special events, mission trips, sermons, and more. His preaching and teaching style might be unconventional, but judging by the “likes” and “views” he gets, it is certainly effective.

“Today’s culture has actually been a gift to me,” he said. “To know where I came from and bring it to my ministry. It’s a place of connection between me and the young people. It allows me to walk with them as they learn to pray and to love Jesus. I encounter people who wanted nothing to do with God and then over time, I see them transformed.”

Father Joshua is now based at St. Aloysius as Parochial Vicar, and spends a great deal of time with the church’s youngest members. From reading Bible stories to the daycare toddlers — to leading School Assembly with the elementary students — to hearing confessions at Catholic High, Father Joshua builds relationships wherever he goes.

“I think to be a good teacher, you first have to be present,” he said. “You have to be visible. You have to let people know you. If they see you and know you and have a relationship with you, then they’ll listen to what you have to say. Their hearts will be opened.”

He is strong in his faith, but admits the path to the priesthood wasn’t smooth. It started on a mission trip in 2004 when he was just 16 years old. He remembers the day, the hour, the moment he fell in love with Christ … as if it were yesterday.

“I was on my knees at Adoration, praying in the presence of the Eucharist. Until then, the Eucharist had always just been a symbol to me,” he said. “but as I knelt there, I perceived that Jesus Christ was in front of me. He became real to me. All my life, I had been searching to fill this ache in my heart — with sports, with friends, with dating, with sin. And nothing worked. And now, here was Jesus Christ in front of me. Then I heard the words, ‘I love you.’ No mention of my sin or my faults or that I needed to repent. Just unconditional love. And it pierced my heart.”

The experience brought him closer to God, and he felt a calling to the priesthood — but he resisted the idea. Over time, Father Joshua says, he became more willing to do what God asked of him. “I began to desire for myself what I knew God desired for me.”

After a year at Southern University, he dropped out and enrolled in the seminary. He hasn’t looked back since. If there is one message he strives to share, it is to know that God is speaking to us … so listen.

In an interview on Catholic Life TV, Father Joshua noted that God has many ways of “speaking” to us. It could happen during prayer, reflection, a family event, or an everyday moment. “But it’s not always ‘words’ that come across,” he said. “It could be a feeling, a situation, or other people. Very often, He speaks to us through other people in our lives.”

Hearing … and heeding … God’s call brings happiness to Father Joshua. “What sets me on fire is when I see people be what they’re called to be. We’re all called to be saints, but every saint did not look alike. Ask yourself, ‘How is God calling me? Is it through marriage or through religious life? Or in some other way?’ Try to be who God has invited you to be.”

In a special video series, Called by Name, Bishop Robert Muench praises Father Joshua’s style of communication. “Father Joshua’s faith journey now inspires many young people to become active Catholics,” he said. “His unique approach to evangelization and his uplifting example are leading young people to a better life centered in Christ and grounded in the Church.”