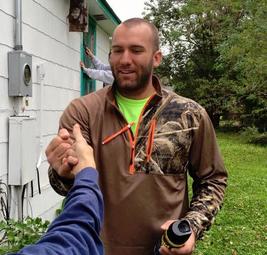 Spring and summer are busy times for Alex Byo. Just about every week, he is greeting a new group of high school and college students from across the country. They are here to participate in Revive225, a ministry that transforms hearts as well as homes.

The home repair ministry, sponsored by First United Methodist Church, got its start when a pastor asked the congregation … how can we be better neighbors?

It was clear that the church could be more engaged … after all, it draws mostly white members from the city’s suburbs to a predominantly African-American community downtown. After some soul searching and a few steering committee discussions, FUMC realized that it could do God’s work by helping to improve the properties of homeowners within a three-mile radius of the church.

Byo, who had grown up at FUMC, was a recent graduate of Tulane University, and after two years playing major league baseball, had been released by the Arizona Diamondbacks. He was at a crossroads in his life. Leaders in the church approached him about getting the new ministry off the ground, and Revive225 was born.

An anonymous donor made a $1 million gift to help launch the program. A year later, Byo was working full-time as director and building relationships with homeowners in Spanish Town, Mid City, the Garden District and other nearby neighborhoods. For about 10 weeks each year, his young crews are building ramps, painting walls, doing landscaping, and repairing roofs, windows and doors for residents who wouldn’t be able to afford such improvements on their own.

The physical labor is one aspect of the ministry. Connecting with their community, however, is the heart and soul of it.

“The spiritual benefits are incredible,” Byo says. “We’re spreading the love of Jesus in these communities. The people we help are so grateful and the young people who do the work are growing in their faith.”

Molly Ann Walke, associate director, agrees. “This has been one of the best experiences of my life,” she said. “Building relationships with our homeowners fills my heart with immense joy —hearing their stories, spending time with their families and sharing meals together are experiences I wouldn’t trade for anything.”

Revive225 targets youth groups affiliated with universities and churches in other states. New groups arrive on Sundays and undergo orientation followed by dinner and evening worship. The group also visits the job site where they will be working. Monday mornings mark the beginning of the work week. Students normally have breakfast about 7 a.m. and arrive at the work site by 8 a.m. Work ends about 4 p.m.

In the evenings, the group enjoys dinner together and fun events focused on Louisiana culture — crawfish boils, visits to the old and new State Capitols, the LSU campus, Tunica Hills, Bluebonnet Swamp, and other field trips. If time allows, some groups take a day off during the week and plan a trip to New Orleans.

It’s an unforgettable experience for the young people who volunteer their time and talents.

“Before I participated in Revive225, my faith was failing,” said Brandy Cooper, a sophomore at Tennessee Tech University. “It restored my faith in Christ by allowing me to love on a community in ways I never imagined I could. I am so grateful for the lasting friendships I made through Revive225.”

High school senior Chris Lewis agrees with Cooper. A member of FUMC in Gainesville, Georgia, Lewis has visited Baton Rouge twice to participate in the program. “Revive225 totally rocked my faith,” he said. “My group helped move a lady back into her house after two years and it was a wonderful experience. It showed me what I wanted to do with my life. The staff opened my life up to mission work and mentored me to be prepared to serve others in the future.”

As a Revive225 leader, Walke is encouraged to see the spirit of service fill the hearts of the young volunteers. It strengthens her own faith, she says.

“God’s faithfulness is revealed to me daily through the love that seeps from our out-of-town volunteers, our church members and members of the Baton Rouge community who give their time and energy to help this ministry exist,” she said. “Revive225 is a life-changing experience for everyone involved, and I am so thankful to have been part of it since the start.”