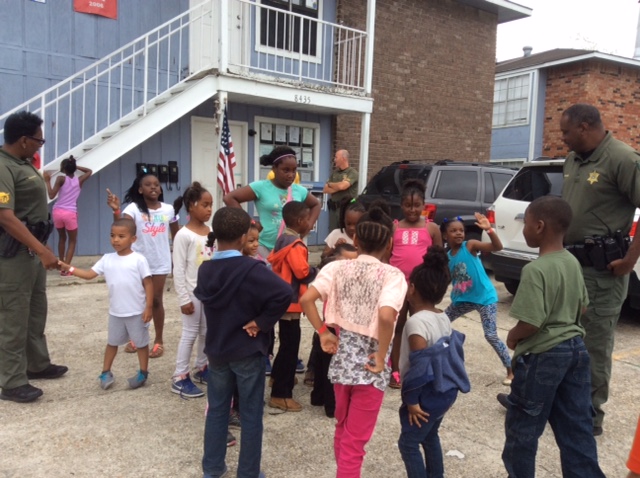 As Captain Andrew Stevens walks to his sheriff’s unit, a truck slows and stops. The driver leans out to talk. After a few minutes’ conversation, they both smile and move on. It speaks volumes. At a time when many communities are experiencing explosive relationships between law enforcement and citizens, there is visible growth in trust and peace in the Gardere community just south of LSU. Crime rates have dropped as a result of collaborative efforts by the EBRP Sheriff’s Department, churches and local businesses coordinated by the Gardere Initiative.

Stevens acknowledges that many well-meaning people have a desire for community transformation, but real change takes a heart-felt life investment. “I’ve got a great bunch of guys that work in Gardere. They work hard daily,” said Stevens, commander of the Gardere Substation. “I wouldn’t trade them for the world. They give you 100 percent. They try to understand our community – where it is and where it’s trying to go.”

Sometimes that means talking to a grandson who has just stolen goods from a store, or a girl who skipped school to secretly meet her boyfriend. It means stepping into the clash of cultures between African-American and Latino youth. After a series of incidents between rival teens, Stevens and the Gardere Initiative organized a meeting at the neighborhood Hispanic church, El Aposento Alto, to assure the segment of the community wary of law enforcement that deputies were working for peace and justice for everyone. Crime went down.

“God sent me here,” Stevens said. “And I pray that he continues to send laborers in this community. Churches should not be the four walls of a sanctuary. The people in church are hurting, but they’re not hurting like the ones out there. So that’s where your message and focus need to be – reaching out to people from all walks of life.”

“We listen. That’s the key thing – to listen to what people want and expect from you,” Stevens said.  “And we very rarely say no. It’s important to a community to know that law enforcement has a solid foot right in the center of it, and we’re going to play our part in various roles. We do more than just police work. We educate. We mentor.”

If change can happen in Gardere, it can happen elsewhere, according to Dr. Murelle Harrison of the Gardere Initiative. She is hoping the collaborative effort between law enforcement and the faith community will become a model for other local neighborhoods. “Baton Rouge people are some giving people,” said Harrison. “So that’s what my message would be: if communities come together they could really do some things.” Although most law enforcement and volunteers live outside the Gardere area, they call it “my community.” When challenges occur, a broad response network is already in place.

“When the incident happened in 70805 [North Foster], we were saying, ‘Where are the community people?’” said Harrison. “Because if something were to happen here, we would be right here.” After a spring homicide in Gardere, they immediately gathered at the site for prayer, then discussed strategies for addressing the situation in a way that contributed to peace and future safety.

That sense of community is making major inroads into crime and trust issues. “We’re catching a lot of bad guys,” Stevens said. “I just want the community to have that sense of comfort that the police are here for us; they’re here every day.” Many residents now know the sheriff’s deputies by name. They have met them at sports practice, the Back to School Extravaganza or Trick-or-Treating with the Deputies. This year, a local school is making a way for children to “adopt” deputies by sending birthday and holiday cards.

“I was just overwhelmed. It builds a personal relationship with that child and that officer, and they can connect there,” Stevens said. “That way, when something happens, it involves our feelings. Somebody cares a little bit more because now they can put a name with a face. It’s not just seeing a unit pass up and down the street with no interaction.”

The Gardere Initiative, the vision of Faith Chapel Church of God, serves as a hub for community activities and concerns. It provides a central location – four apartments – where residents can conveniently use computers to apply for jobs, attend town meetings, share advice at a mothers’ breakfast or practice the piano. Volunteers provide after-school tutoring, mentoring and positive role models.

“We need more laborers in the harvest, but we are certainly blessed with the people we have,” Harrison said. “I think we have a lot of people that love the Lord in this world, and we have to let our light shine so they can see the goodness,” Stevens said.

Kids need role models to understand respect for authority, Stevens said. Mothers often work two jobs. There is a high rate of absentee fathers. “Fathers teach males how to be respectful,” he explained. “So we try to get kids at a young age and let them see positive male role models whether it be a coach, a law enforcement officer or a gardener in the community garden.”

“This is not the EBRP school system, so we can pray,” said Harrison. At summer camp, they also taught Bible memory verses. The week after three local law enforcement officers were killed, they focused on obeying authority. “The scripture just happened to be, ‘Honor your father and your mother, so that you may live long in the land the Lord your God is giving you,’ (Exodus 20:12), but we tell them to honor every person who’s in authority,” Harrison explained. “So, honor and respect the school teacher, the bus driver, the van driver, the police officer – every person. It’s really challenging to get them to understand, but we continue to do that.”

“You have to understand that you might have a child that goes home to a lot of conflict, a lot of domestic violence with the people in the household. That child is not eating correctly, not being paid enough attention,” Stevens said. “So you try to get them to understand that they are somebody, too, and they can be whatever they want to be in life. Dr. Harrison does a magnificent job with that – letting our children know that God loves them. We love them. And we want to make sure they are in a position to succeed.”

“Law enforcement has really played a pivotal role in what we do here. We are really proud of the work, but we know that God blesses this place because of the prayers,” said Harrison.

“I pray for God to continue doing what he’s doing in this community,” Stevens said. “I pray that families in the community would go to church on a consistent basis and be in a relationship with Christ as a family. We have to get our people back into church where they can hear from the Lord themselves. Then they can take what they’ve learned and pass it on to someone else.”