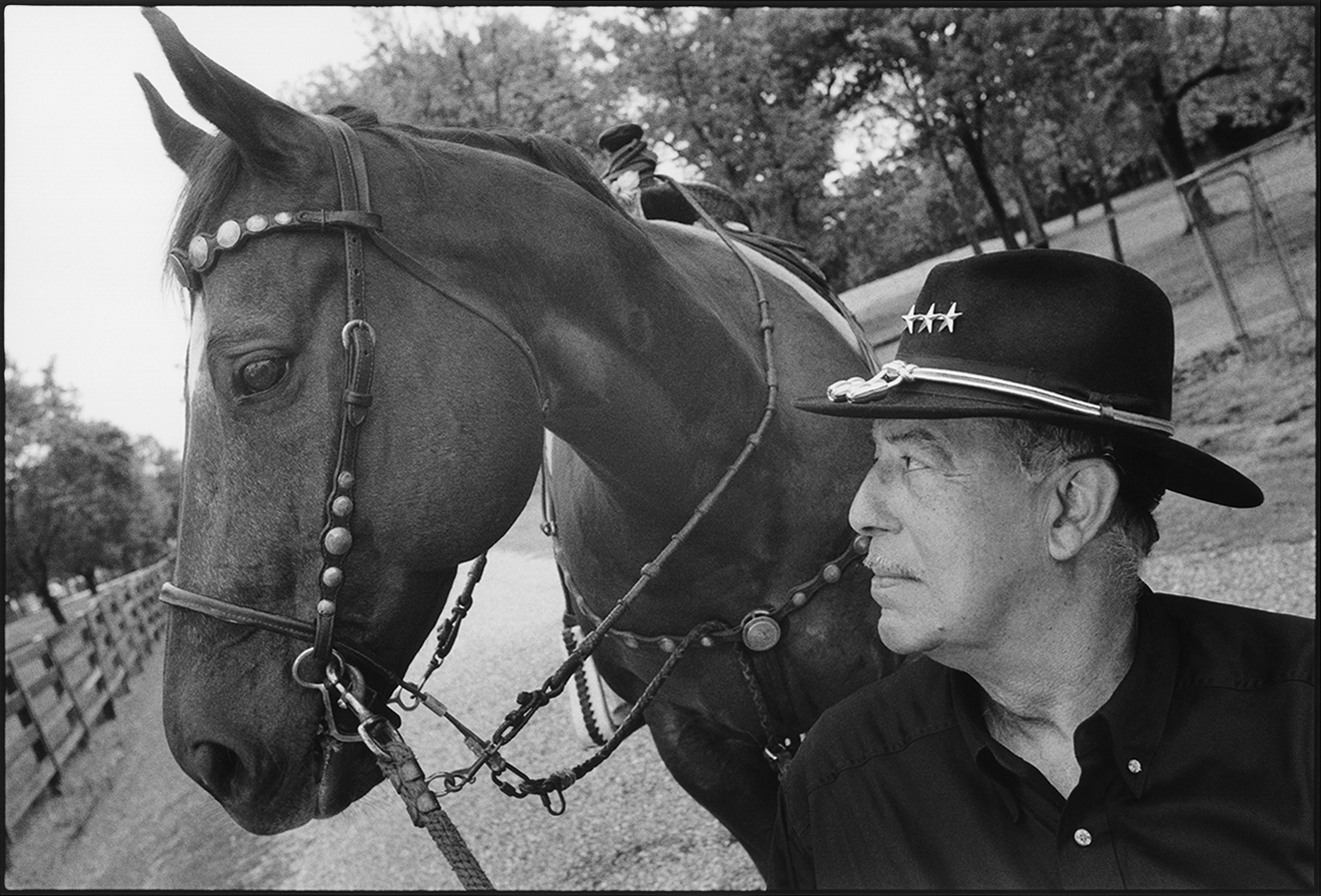 When it comes to managing conflict, Lt. Gen Russell Honoré is an expert. Whether commanding National Guard Reserve forces in matters of national defense or stepping in as Task Commander after Hurricane Katrina, he knows a lot about bringing people together to accomplish a mission.

He watched the news after the Alton Sterling shooting — “Like most, I was trying to process what happened. The question of ‘did we shoot too quick?’ came to mind. It’s during these events we have to find words that bring peace. More violence doesn’t help in a situation like this.

Later, he said he was moved when he saw the testimony of the Sterling family on the news. “You could not get a Hollywood script to write the emotions of the aunt and son. They loved him; that boy loved his daddy.”

Social media was quickly flooded with images, opinions and pictures. “Because of the videos and posts, the images of what people were speculating about went wild.” Honoré decided to quit speculating and get involved. He wanted truth and justice, and he wanted his city to come together. That led to his involvement with Together Baton Rouge. Speaking with Jim Davis of the Chamber of Commerce and other leaders, the first order was to keep peace.

“We first needed to get this young man buried,” Honoré stated. “It then became evident upon involvement of the FBI in the investigation that it would be months or years before this would be complete.”

It was time to look further down the road to reconciliation. Honoré held up both hands. “Do you know what a rookie officer makes? [Nearly] minimum wage – $31,000 a year – less than $15 per hour. Then we ask them to go out on the street and be police officers, plus be a counselor, a role model for kids, play basketball with kids, go in some home where a mom has an adult child that is out of control, get in between spouses’ [issues] or between a boyfriend and girlfriend,” he said. “That police officer is under stress because now he has to do overtime to make a living wage. He or she wants to send his kid to a good school and live in a house, so they often come into work stressed.”

A Tale of Two Cities

“There’s one [story] on this side of Florida Street where houses are being torn down and rebuilt, and a big shopping center is going in just off of Bluebonnet Medical Center. Yet, in the shadows of the capital in North Baton Rouge, it’s like they stopped building in the 1950s. Many left and went to the River Parishes, and others went to Prairieville chasing better schools. Now the majority of residents in North Baton Rouge are unemployed.”

This problem is not sudden; it’s happened over a period of years. “Every adult in Baton Rouge watched this happen, but it was not ‘our problem’ per se. I’ve said since Katrina that poor people are not really free, because when you are poor, you don’t get to pick what doctor you go to. You don’t get to pick where your kids go to school or what dentist you see, so you learn to make do. In this case, when the former governor said they were going to tear down the Earl K. Long Medical Center, all the people like me living on the south side of Baton Rouge said, ‘Oh, that must be part of some bigger business plan.’”

From the perception of people in North Baton Rouge, they respond saying, ‘They tore our hospital down!’ Two years later, ‘They closed our emergency room!’ When the lights get turned on to our larger issues and we find ourselves talking about the Sterling death, questions arise. Why such anger so quick? It comes from the perspective of people feeling like they have not had a fair shake at social justice.”

“Everybody thinks these are somebody else’s issues. A lot of the ‘haves’ in town say ‘they’ need to work harder; that the poor need to apply themselves. How? When you have the second worst schools in America and they are not getting any better — these kids need help!”

Honoré is clear about the opportunity at hand. “That emotion that was demonstrated recently was by and large peaceful. That is a reflection for most adults of what they went through in the 1960s. We got to a point where everyone was comfortable with race relations and we moved on. It is like burying the hatchet and leaving the handle sticking out. We did not finish what had been started. We are in the 21st century dealing with last century’s problems.”

Thankfully, Together Baton Rouge has a team filled with a list of ‘Who’s Who,’ faith based and charitable groups that have come together. “Now we have to speak about the unspeakable. We are a great nation, but we are not a perfect nation,” Honoré said. “I want to be known as this ambassador of freedom, the place others want to come. I don’t want to be known as the country of the gun! Most of the world is not looking at us as the land of freedom, they are now looking at us as the land of the gun. Why? Because 30,000+ people a year are killed by guns! In Louisiana, we passed a law to open carry — while we are talking about supporting our police, how about [we talk about] leaving your guns at home?”

“We all have a right to protect ourselves, I understand that, but we don’t have a moral right to carry a gun any place, any time,” he said. “I have guns at my house. I was in the infantry, spent 37 years in the military and know and respect what they are for and what they can do. Yet, the idea that you can carry a gun anywhere at any time is a bankrupt idea.”

“To put it in context, when someone called 9-1-1 on Sunday to say there was a guy walking on Airline Highway with a gun, there might have been 50 people that passed him and said ‘There is a man carrying his gun. He is a demonstrating the open carry law.’ But one good citizen said, ‘He is not only carrying a gun, but he has a mask on – that looks a little weird.’ And we know the rest of that story.”

He continued, “What people in Baton Rouge need to understand is that if we don’t invest in kids and they’re not reading at a fourth grade level by the time they are 10, particularly boys, they have a 50 percent chance they will have a run in with the law by the time they are 14 — that is right from the Children’s Defense Fund data. We need to make sure schools are fully funded, even if we have to put 2 teachers in every classroom. I would rather over-spend on K-12 and not have a dime for TOPS.”

“Over 75 percent of the people in Angola can’t read on a third grade level — there is a direct relationship. Currently we have very few mental health services for children. Fifteen percent of our population has some type of disability, and it is like we have not paid attention enough to recognize that.”

A lack of funding has brought many programs to a complete stop, Honoré said, “We are the second largest energy producer, but the second poorest state. We have to fix our state business. This city has a lot going for it with all the industrial development – that is a positive.”

“The future we feared is here, we must use this moment, this is a huge opportunity for our city. We don’t have time to kick this to the next generation. The violence we have in south

Louisiana, particularly Baton Rouge and New Orleans, is horrendous. We have to value life better then that.”

Realizing we can’t value life for others, teaching that skill can seem impossible. You can’t make others suddenly value life because it would help our city. However, Honoré believes we can reach kids earlier with better options than street life.

“The best sports fields in our city are where? I live off of Bluebonnet and most in that area are world class. Yet you have to stretch to the other side of Southern University to find anything like it. If you go near where this young man was killed, there is a little park down there, but it doesn’t even have a basketball goal.”

“We have to get involved. We need to get the federal government involved. We have outstanding 4-H programs, and we could have an urban 4-H program that the federal government would pay for. Our universities can [also] become engaged,” he said. “When I speak across the country, I tell people that leadership requires sacrifice. Choose to be that successful business person who finds someone to mentor —if you’ve done well, give back! Our churches have done well, but [the church hour] is the most segregated hour in Baton Rouge. As we enjoy our congregations, we need to think about how to bring new people in. We have become too comfortable with it being segregated.”

“We are all part of this problem. We can’t have the majority of the people living in the parish living in poverty. Those that have good jobs have moved to places with better schools. How did we end up with sub-par schools in the first place? I have lived in Virginia and they have good public schools — we are missing that opportunity.”

Moving Forward as One

Establishing priorities in a huge plan and seeing years of hard work ahead can seem daunting, but we must get to work, and Honoré is ready to help lead.

“Number one, recognize that we have a problem – we – this is our house. We don’t just clean the front of the house and not the back of the house. We can’t leave this for the next generation to try to figure it out. Take the 50 percent unemployment rate — we have to collectively offer hiring opportunities to people out of North Baton Rouge.”

“If we can send a missionary to Cameroon, then we can send one to North Baton Rouge,” Honoré said. “We have a lot of people that are trying to do good things, but people have to take if further. Not go in for a day, but create relationships that become friendships.”

Many have asked him about running for public office. He laughed and said, “I am as deep as I can get. But no, I don’t wake up in the morning with aspirations to be the governor or [serve in] any other office. My best place, and where I spend most of my time, is with me and my little team working on environmental justice.”

Russel L. Honoré is a retired Lieutenant General who served as the 33rd commanding general of the U.S. First Army at Fort Gillem, Ga. He is best known for serving as commander of Joint Task Force Katrina, responsible for coordinating military relief efforts for Hurricane Katrina-affected areas across the Gulf Coast, and as the 2nd Infantry Division’s commander while stationed in South Korea. He served until his retirement from the Army on January 11, 2008.