Many South Louisiana residents went to bed the night of August 13 to the sound of a steady rain — only to be awakened in the middle of the night by neighbors or family members urging them to leave their homes. The flash floods that had started the day before were now a full-fledged disaster. Thousands of homes and neighborhoods were flooding faster than anyone had expected, and the calls for rescue were coming in fast and furious to first responders.

Thank God for the Cajun Navy, a loosely organized group of private citizens willing to help transport flood victims to safety. The “captains” came from everywhere. Word spread that anyone with a boat and the desire to help was welcome and most important, badly needed. State and local officials worried about so many private citizens headed into the flood waters, but at the same time, were grateful for the assistance.

Sgt. Don Coppola of the Baton Rouge Police Department told local media that it was a real struggle to keep up with the number of rescue calls, especially as the flooding situation worsened over the following days. He said there was no way law enforcement could have rescued as many people as they did without the help of the Cajun Navy.

A CNN story about the group aptly described it as “possibly the nation’s most important neighborhood watch.”

Chris King of Prairieville was one of those Cajun Navy captains, along with his friends Joshua and Nicholas Loupe of Morgan City. On the Saturday of the flooding, King had been in close touch with a fellow employee who lived in Denham Springs and needed help. Joined by another family (and co-worker), she now had six adults, two toddlers, two elderly family members and several dogs in her home, which was rapidly filling with water. Although she had called for help, no one had arrived yet.

King and the Loupes set on their way, completely unaware of how dangerous the trip would be. In fact, the rescue would take 11 hours, and more than once, King was unsure if they would be successful. “We’re all men of faith,” he said. “Before we even put our boats in the water, we stood and held hands and prayed. We asked God to watch over us, to give us wisdom and keep us safe. I think because of that, we didn’t have a lot of fear. We kept going even when we thought it might be smarter to turn around and go back.”

Once the rescue was complete, King found himself at home still wanting to help. He and the Loupe brothers started talking about a Cajun Army —  volunteers to help with a more “boots on the ground” approach. “We are called to love our neighbors,” he said. “And this seemed like a way to connect meaningful work with people who want to serve.”

Two days after setting up a Facebook page, King had 82 volunteers offering to help in any way they could. He eventually started a website to manage the growing demand for information and resources, and by the first of September, already had 3,000 volunteers.

“I got calls from people all over the country,” King said. “I couldn’t believe how many people wanted to help. I tell you, God has created something amazing and I’ve got a front-row seat.”

Even though the most immediate needs (shelter and safety) have been met for most people, the Cajun Army’s work continues.

An elderly blind woman with a husband in his 80s heard about the Cajun Army and in tears, called King to ask for help. The couple had placed all of their possessions in storage and she needed to get it out by the following day or she would lose everything. “I made some phone calls and we took care of it,” King said. “Another elderly lady had gone back to live in her house even though it’s filled with black mold. Her neighbors called us because they were worried about her health. We were able to get her to leave until it’s safe for her to return.” 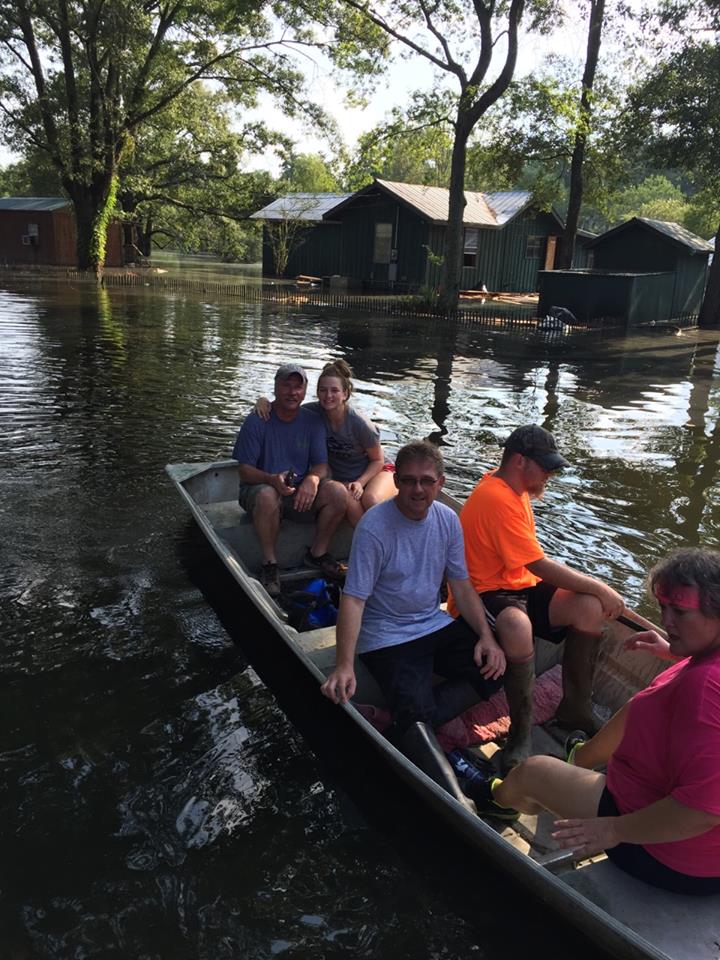 King says he has witnessed untold miracles, large and small, since the Cajun Army was formed. “Over the years, I’ve been a youth minister and I’ve been involved in church leadership, spiritual retreats, prison ministry … but I’ve never seen anything like this. This is the most powerful thing I’ve ever been involved in.”

Helping others, especially in times of crisis, can be overwhelming. “When Josh and Nick and I made that 11-hour trip in our boats, we were focused on rescuing our friends,” King said. “But when it was over, it hit us like a ton of bricks. We had gone through so much emotion. We felt fear, joy, worry. At times, we were defeated, lost, terrified. It was a lot to go through.”

The Cajun Army will be available as long as there are people who need help and people who want to serve. “Not every volunteer is a person of faith,” King said. “Even if they don’t all identify with a church or religion, they identify with Christian values. My hope is that we will all continue God’s work together. It’s not okay to keep going about your everyday life while there are so many people who are still suffering. It’s going to be a long road to recovery …”

If you would like to know more about the Cajun Army, go to thecajunarmy.com. You can also search for Cajun Army on Facebook.