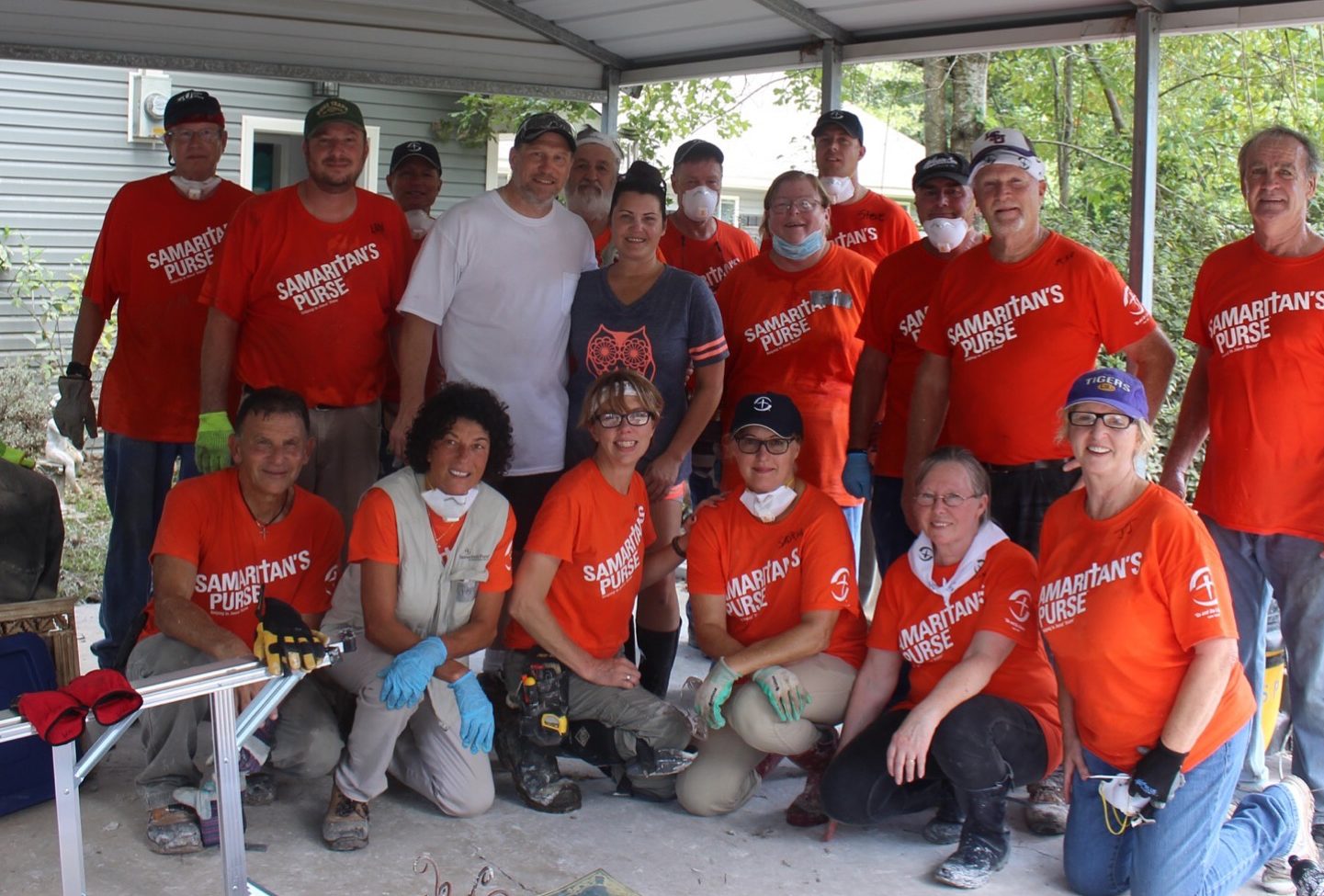 “Before the flood, we were engulfed in anger, hate and even violence. But the church went to God in prayer and asked him to deliver the city. We’re not talking about violence and hate anymore,” said Pastor Donald Hunter of New Beginning Baptist Church near Plank and Hooper roads. “I am a living testimony.”

The rev. Hunter’s story resonates because it is our story: devastating loss followed by demonstrations of divine love. Pain giving birth to progress. All three of Hunter’s kids lost their homes: in Central, Monticello and Villa Del Rey. He was able to get them out unharmed. “God didn’t take any of their lives, not a hair off their heads,” he said. “When you drive down the street and see the mess and smell, you realize God is good, because his mercy endureth forever.”

“There is something with the profession that he is good,” Rev. Hunter explained. “God then turns what we see on the roadside to his glory. Out of this he will transform this city into being new again.”

“At times like these, God’s people stop being so focused on being a church, and we’re almost shocked into being The Church,”[all who believe in Jesus Christ], said Greenwell Springs Baptist Church Executive Pastor Andy Stafford. “We open ourselves up to the Holy Spirit moving and stop trying to do things by our own power. So, we think of what we can do, but when things are so obviously out of our control, we have to turn to the Lord. That’s when he really shows us just how faithful and how amazing he is.”

Out of the muck and chaos, stories of gratitude continue to emerge. A man originally from Cuba sent his wife and four children to find refuge while he stayed to fight the floodwaters at their home near Millerville Road. When the water reached five feet, he survived by climbing on top of his truck. “Through the night he had to fight off many snakes,” said Pastor Guillermo Mangieri of Istrouma en Espanol (Istrouma Baptist Church), speaking through interpreter Carlos Schmidt of the Louisiana Baptist Convention.

“The water receded and the whole family came back. They just put plastic on the floor and a blanket and they slept on the wet floor for two nights until a disaster relief team from the church provided mattresses and other bedding. Like many other churches, Istrouma continues to minister through relationships forged in the aftermath of the flood. Another team reached the home of woman who lived alone. “When the disaster relief team came she said, ‘You are an answer to my mother’s prayer in Cuba because you are coming and helping me now.’ And she received Christ,” Schmidt said.

The church continues to embrace the families reached by its disaster teams. After housing, feeding and clothing a family of new believers, members brought them home. “We prayed for them and then they read Psalm 46 and said now I understand that it’s Jesus who takes care of me. It is proven that he cares for me,” said Schmidt.

“It’s pretty easy to pick out those who are trusting and believing in the Lord because they say, honey, everything’s going to be alright. We’re okay, we know the Lord. He’s getting us through this,” New said. “Then you run into somebody who doesn’t believe. And they’re angry at a God they don’t believe in because they just lost everything.”

That example has reverberated through the lives of Greenwell Springs Baptist Church members Craig and Michelle Morgan. Currently on assignment for Exxon-Mobile in Saudi Arabia, Craig and Michelle received a message from their daughter that both their home and his parents’ home on Highway 16 in Denham Springs were flooding. They were on an anniversary cruise out of Copenhagen, Denmark, but were able to get information through Facebook and Skype.

“My sister called my mom on her cellphone and said, ‘Y’all need to back the truck out from under the carport and put a ladder in it, in case you need to get on the roof,” he said. When water reached their knees in the bed of the truck, they climbed onto the roof and eventually flagged down a rescue boat. It was his dad’s 79th birthday.

“My family has been on this piece of property for at least 80 years. We have never seen water in any of these houses,” Morgan said. The water reached 6 to 7 feet.

Stuck on a cruise ship with no available port, the Morgans realized the enormity of the rebuilding task. They connected with a young cruise employee and shared their story. “She said, ‘I can’t imagine how strong you two are because if I had lost everything, I would be in shambles. You are carrying on as if nothing had happened,’ Morgan recounted. “I said, ‘Well, I don’t want to give you a false impression that we haven’t cried a few tears, but if you want to really know why we’re so strong it’s because we’ve made a conscious decision to honor God with our lives. We put him first and we know that we’re in his hands.’”

“We’re hanging onto a couple of scriptures. One is: ‘Many are the afflictions of the righteous, but the Lord delivers him out of them all’ [Psalm 34:19]. And the second one is: ‘Sorrow [weeping] may endure for a night, but joy comes in the morning’ [Psalm 30:5],” Morgan explained. “She said, ‘You are an example to everyone.’”

“If all this had to happen for us to be there for her, it’s worth it all; God used it,” said Michelle. “It’s going to take time and it’s not going to be an easy road,” said Craig. “But the big thing is that everybody has come together, the whole community’s come together to help one another out. People of all ethnic backgrounds are pulling together to help each other. That’s been the biggest thing I’ve seen.”

Kay Taylor, regional account manager for Cumulus Media (WXOK), agrees. “Things don’t happen without a reason and a purpose,” Taylor said. She watched the Amite and Comite rivers suddenly rush to meet beside her house in the Brentwood subdivision in Baker. As the water rose, flooding her cars and home, a man with a large truck appeared and drove her family to safety. Taylor said the flood insurance she paid for 25 years is a matter of dispute because her mortgage was sold to a company that considered her home well beyond the flood zone. Still, she calls herself “super blessed.”

“I have no clothes. I have no shoes. I have nothing. I’ve got my life, and I’ve got my God, so I’m good. I can’t live in the past, and I won’t let things dominate my life,” said Taylor, a member of Interdenominational Faith Assembly.

God’s protective covering, described in Psalm 91, and his cleansing work are evident in the community, Taylor said. “You have to listen and see what has happened. This is the worst flood in a hundred years. Baton Rouge, we’re a praying city,” she said. “And God spared us a whole lot. But there’s too much evil. Killing the Sterling young man, killing the three innocent cops. God is not pleased with all that, so he’s just trying to get us in line and keep us right.” Taylor hopes that individual lives, as well as homes, will be rebuilt. “You can have a good life – you and God,” she said.

The rebuilding process creates opportunities to “get into the storm before the storm,” according to Billy Graham Rapid Response Team Chaplain Al New. Chaplains go to home sites with each Samaritan’s Purse disaster relief team from their temporary headquarters at Greenwell Springs Baptist Church. “A lot of people already had issues in their lives, and that’s what the chaplains are dealing with on a daily basis out here – not so much the storm that brought us here, but the storms that they were going through. It may be a divorce or illness or need for reconciliation. We’ve seen families that were not getting along so well become united through this flood.”

The spontaneous outpouring of help is a good sign of future success, New said. “These people are strong people and they’re used to hard lives. So, coming into here, driving in and already seeing rows and rows and rows of debris at the side of the road – you don’t see that normally anywhere else. Usually they’re waiting for somebody to come and do it. But they’re way ahead of the game here because they chose to help each other.”

“I just want everybody to stay prayed up and know that God is faithful and that everybody understands their purpose in life – to be a blessing to their family, but to their neighbor also,” Taylor said. “We need to just to be decent, good people, do what’s right and try to line up with God’s word. ‘But seek ye first the Kingdom of God, and his righteousness; and all these things will be added unto you.’”

Editor’s note: For assistance or volunteer information, Samaritan’s Purse may be reached at 985-402-4350 or samaritanspurse.org.