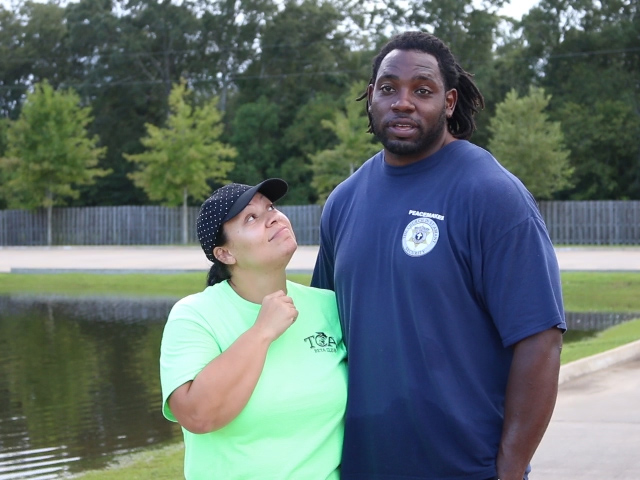 After riding in a boat for 15 minutes and wading through two and a half feet of water, Derrick and Cheree Franklin finally made it to the front door of their home. Derrick stuck the key in his door and before turning the knob, he whispered, “It’s the moment of truth.” As he opened the door slowly, the reality of what had happened in the days prior sunk in. Their hometown of St. Amant was flooded as the Amite River, Bayou Manchac, Blind River and other tributaries in the area backed up with massive amounts of rainwater. Derrick looked around in amazement, his wood floor planks floated on top of the murky water along with other household items he has worked for and collected throughout his life.

Side by side, the Franklins carefully moved forward, one foot in front of the other, pushing aside the floor planks. Cheree grabbed her husband’s arm and began crying at the sight of three feet of water inside their home. But her tears were not hopeless, because hanging high and dry on the center of their living room wall was a picture frame with a quote that read, “Faith is not believing that God can; it is knowing that He will.”  One thing the Franklins say they know for sure is that God will be glorified through this tragic event. The Franklins strongly believe that God has already been glorified as the people in the community reach out to one another. “He’s using the church right now to reach out to the community, to be the light that we are supposed to be as the body of Christ,” Derrick said.

The Franklins are members of The Church at St. Amant, a church that prepared more than 120,000 meals, brought thousands of people back to their homes by boat, and clothed and sheltered thousands. They continue to provide for and serve the community as it heals. But when Derrick says the church, he isn’t talking about The Church at St. Amant specifically — he is talking about the worldwide church.

“I love the relationships being built right now,” Cheree said. Gesturing to Jarrett Simoneaux, the boat driver who picked them up to bring them to assess the damage of their home, she continued, “We will never forget this young man who is bringing us to our home.” Simoneaux’s home was spared in the flood, but he came from Donaldsonville to help his neighbors. “I don’t like seeing people hurt, and I want to help people in whatever way I can,” Simoneaux said. Although Simoneaux does not classify himself as a part of the “Cajun Navy,” he is still among the thousands of Cajuns who volunteered their boats and time to help people.

The Franklins say they don’t believe it is a coincidence that three and a half weeks after the Baton Rouge police shootings and riots, the floodwaters came. “Everyone kind of wanted to know where we were in the black verses the white [issue].” Cheree and Derrick, both African Americans said, “We don’t fall in either of those [labels]. We’re Christians. We don’t see color. We see souls.”

The color lines blur as disaster relief shows people helping people with no color barrier or prejudice. Derrick added, “You hear nothing else about that right now. It’s all about saving and helping whoever we possibly can, whenever we possibly can.” He said it drives him crazy how the media hangs on a topic for so long and over exaggerates it. He boldly proclaimed, “If we focus on Christ the entire time, we’ll never get to those other barriers.” And even in the midst of losing almost everything he owned, he was still able to say, “This is awesome, if you ask me.”