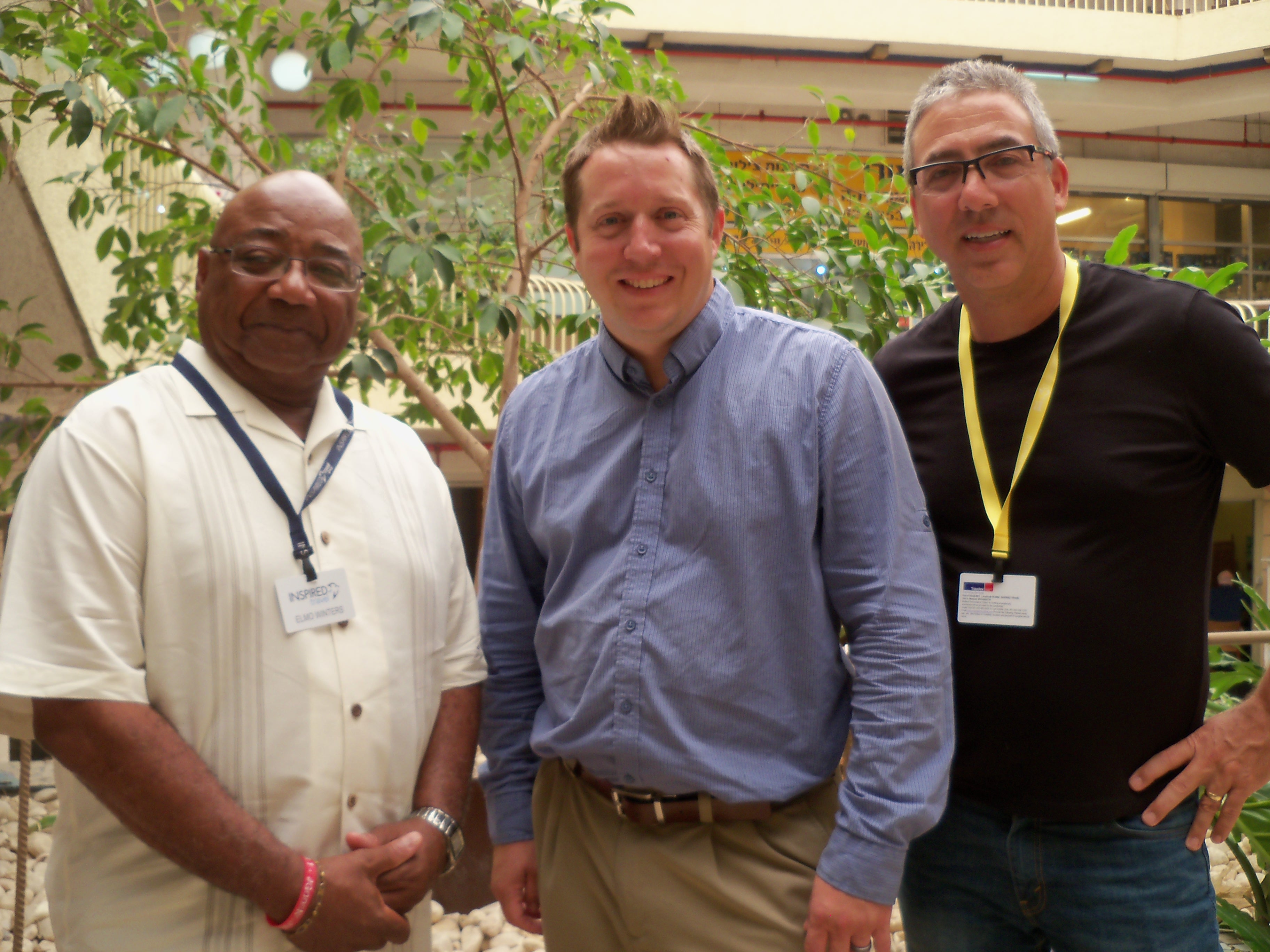 “But as it is written, Eye hath not seen, nor ear heard, neither have entered into the heart of man, the things which God hath prepared for them that love him.”— I Cor. 2:9 (KJV)

When the topic comes up about traveling to Israel or going to the Holy Land, most believers immediately express their desires to go. Those who have already made the journey usually reminisce about their blessed experiences while there. A Baton Rouge team of five ministers, distinctively chosen by God, took part in a trip to Israel that can best be described as a unique experience with the Messianic Jewish community. From September 5-14, team leader Bill McMahan of God’s Peace Ministry; Mark Lubbock, of Gulf South Men; Johnny Leblanc, of Child Evangelism Fellowship; and Elmo and Therese Winters, of the Kingdom Group International, participated in the 2016 Promise Keepers “One in Messiah” Israel tour and event. Each was touched in a special way as they were ministered to daily by the organizers of the trip.

Promise Keepers men’s ministry has been active in encouraging men toward action for about 25 years. Mostly, it has been known for rallies of men in sports venues, and now, continues in several ministry areas from daily devotions to inspirational messages. The Israel connection was started by Coach Bill McCartney and Dr. Raleigh Washington more than 5 years ago. They organized and coordinated two “One in Messiah” trips, one in 2014 and the second this year.  This year’s tour was led by Dr. Washington and included a group of approximately 140 Americans from all walks of life.

Pastor Bill McMahan explained that this was his second trip to Israel, and as such, it gave him an opportunity to revisit some places to better appreciate and absorb the culture.  Since Promise Keepers coordinated this trip, it was unique in that it had the dual purpose of touring the traditional biblical sites and establishing relationships with Messianic pastors ministering and living in Israel. “There were about 50 pastors from the U.S. on the trip, and we teamed [up] with 21 Jewish pastors with the goal of [creating] lifelong relationships between us,” McMahan said. This required much prayer and commitment.

Pastor McMahan was blessed to be paired with pastor Leon Mazin of the Return to Zion congregation in Haifa, Israel. (To learn more about the multifaceted ministry of this active fellowship, visit www.shaveitzion.org, and check out “Return to Zion” on social media.) McMahan counts it a blessing to now be a part of this Christian ministry, and plans to fulfill his commitment with the help of modern communications and social media. The Return to Zion congregation ministers with its soup kitchen, Olim (immigrant help), a pilgrim’s outreach program, a Holocaust survivor’s service, media communications, a theological institute, a music school and in many other ways. They network with two humanitarian ministries in Israel, the Joseph Project and the Joseph Storehouse, to provide help for refugees who frequently arrive with little but the clothes on their backs. Although the Messianic Jews in Israel comprise less than .5 percent of the Jewish population, they are very active and involved in serving their communities. Pastor McMahan said it is an honor to serve in his role and to come alongside them in ministry.

Child Evangelism Fellowship (CEF) minister Johnny Leblanc’s views of the trip to Israel were summed up with him saying, “If I had to pick one word to describe Israel it would be ‘transformation.’” Traveling the land from Jerusalem (~2,400 feet above sea level) all the way to the Dead Sea (1,400 feet below sea level) is much the same. It is brown, dry, desolate and harsh land.

“This is exactly what God said would happen when his children refused to obey his commandments,” Leblanc added. When all the evidence points to hopelessness and despair then comes a, “but God said,” experience. Ezekiel, chapter 47 prophecies of a day that is coming when living water will flow from the Temple of God in Jerusalem, all the way down to the Dead Sea, and will give life to everything on both sides, and it says that there will be an abundance of trees, food and fish. Only God can do this.

In God’s mercy and grace, He gives what is not deserved. This is happening now in Israel. While in the Holy Land, the Baton Rouge native saw a great sense from everyone of God calling and bringing his people back to Israel just as the prophet Ezekiel wrote in Ezekiel 37:21-22: “Then say to them, ‘Thus says the Lord God: “Surely I will take the children of Israel from among the nations, wherever they have gone, and will gather them from every side and bring them into their own land;  and I will make them one nation in the land, on the mountains of Israel.”

Child Evangelism Fellowship’s mission is to reach every child, every nation, every day. Leblanc currently serves on the State Board for CEF of Louisiana, so it was a great opportunity for him to connect with Child Evangelism Fellowship’s National Director of Israel, Fadi Ramadan. It was a divine appointment. CEF of Israel is ministering to about 500 children a day across the nation.

What surprised LeBlanc, however, was the fact that it is illegal to share the good news of Jesus Christ with Jewish children. Subsequently, this Jewish ministry works with non-Jewish children and prays that the gospel will penetrate these man-made barriers. The CEF of Louisiana State Board has adopted CEF of Israel as a ministry partner, based on Genesis 12:3, where God tells Abraham that he will bless those who bless you [Israel]. It is the ministry’s prayer that it will, in some way, be part of God’s plan to transform Israel by imparting the grace of Jesus through children. Besides, why not tell all of Israel, it was a Jew who saved my life, and His name is Yeshua (Jesus).

A trip to Israel for a pastor offers the excitement of walking in the footsteps of Jesus, with the hope that it would transform future conversations about our Lord, Mark Lubbock remarked. He remembered that many of his friends returned from Israel sharing with joy the deep spiritual and emotional impact they experienced during the trip. It was important to him to have his own experience; thus he went without any preconception.

Some of the many sites that were visited offered mountain-top experiences. Standing in the temple where Jesus read from the scroll of Isaiah impacted Lubbock strongly. Yet, what he considered the most meaningful part of the trip was a surprise. It was not a biblical site nor venue. For him, the most significant part of this trip was coming away with a much deeper understanding of God’s people in God’s nation. Talking with many of the Israeli residents helped the pastor to see the ‘living land’ vs. dead history. What made it so fascinating was the way that the locals accepted biblical scripture as their ‘personal’ history. He came away from Israel seeing the nation as a still-living biblical narrative.

Most of the Israelis have a fierce pride in their nation and are extremely patriotic. However, it was astonishing to learn that 41 percent of the nation is secular. According to the Israel Bureau of Statistics 2014 Report roughly 12 percent of Israeli Jews are defined as haredim (ultra-orthodox religious); an additional 9 percent are “religious;” 35 percent consider themselves “traditionalists” (not strictly adhering to Jewish religious law), and 43 percent are “secular” (termed hiloni). An even greater surprise was that almost 9 percent of the Arabs in Israel are Christian, while fewer than 2 percent of the Jews are Christian.

Lubbock further explained that his takeaway from this wonderful experience was that there is a rich opportunity to share Jesus with the secular Jews, and perhaps the best approach is to empower locals whom God has raised in the nation as Messianic or Christian Jewish pastors.

He was paired with a young and dynamic pastor who emigrated with his family from Ukraine. Pastor Sergey Mazhuga graduated from Hillsong, and together with his wife, Natasha, led the ICF Tel Aviv Church (www.icf-telaviv.co.il.) Believing that God selected this pastor and his wife to reach the Jewish people, Lubbock’s goal is to offer resources, spiritual strength and support in his tremendous mission. Jewish Christians are making a significant sacrifice in the country they love, for the people they love, in favor of the one true Lord God whom they love and serve — Jesus Christ.

Elmo and Therese Winters saw this journey to Israel as a new door opening for reaching souls for Christ. Like their team, they approached it as a mission trip, rather than an opportunity to see the historical sites in the Holy Land. Thus, God started connecting them with Messianic Jewish believers before they even left Baton Rouge. The Winters initiated a relationship with Michael and Patricia Brian months before their trip. The Brians, originally from Louisiana, are ministers now serving in Israel. While in Jerusalem, the two families met and spent time together in fellowship, encouraging each other.

The highlight of the trip for Elmo and Therese was the partnership they established with pastor Jonathan Moore and the Ahavat Yeshua (Jesus’ Love) congregation in Jerusalem. After sharing some quality time together and touring the ministry’s sanctuary, it was obvious that this is truly a connection made in Heaven. Plans are to support the church in many ways, including annual visits to work and worship with this loving group of Jewish believers.

With such a powerful experience shared by the Baton Rouge group of ministers, plans are already being discussed about returning to the Holy Land in 2017. There is much work to be done in this precious harvest field, and the team has committed its support by visiting often.  This is the greatest form of encouragement to the Messianic community in Israel.