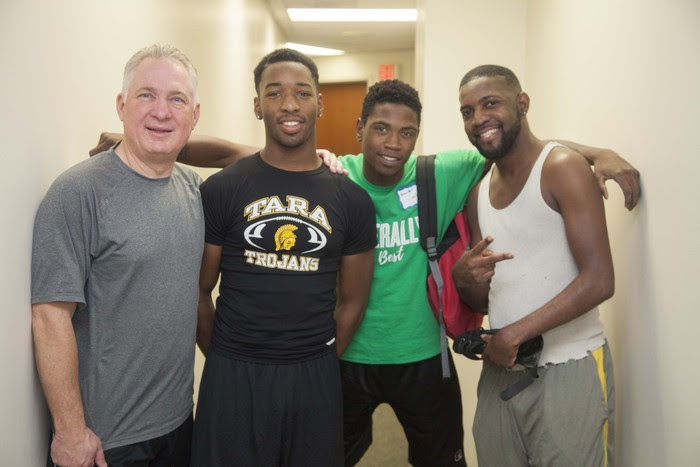 Three men were recently baptized as more than 40 others watched-then they all played basketball. It didn’t seem odd.

For no spiritual reason, about five years ago Jeff Ginn, Pastor at Istrouma Baptist Church, asked M.L. Woodruff (Coach), to organize some “pick-up” basketball games for the staff. Coach is the Sports Outreach Director and directs teams for about 1,000 kids annually, so it wasn’t long before a dozen staff members played; then a few church members joined; then someone invited an outsider, and then … What started as a small group of mostly white co-workers is today the Lunch Bunch Basketball league, a mission to about 250 men, 90 percent black, which plays twice a week at noon.

Istrouma is not trying to build its own base. “Our goal is not to bring people to Istrouma,” says Coach, who has built a leadership team of 16 men, only some of whom attend Istrouma. When Lunch Bunch Basketball started expanding, he invited Clayton Hayes with Connections Ministry to join the leadership team to help develop the program and to contact other pastors to see if they wanted to start similar programs.
Rene Brown, Pastor at Mt. Zion First Baptist Church, intends to start a program. Bart Riggins, Pastor at Faith Chapel on Staring Lane, is starting a Lunch Bunch program in the Gardere neighborhood. BREC, which serves mostly school-age kids and typically doesn’t open its gyms until after school, is willing to open its gyms earlier for this program. The police and sheriff’s departments, recognizing a need to become more closely connected in communities, especially with black men, are also participating.
Forty men don’t show up twice a week just because someone blows a whistle. Below the surface is great attention to detail. Nathan Strong, Coach’s assistant, who majored in sports administration and minored in business at LSU, registers each player as they arrive, assigns them to teams, hands out (and picks up and washes) the colored jerseys that identify each player with his team for the day, puts their names on the team board, ensures the clocks work, keeps track of the time of play (they rotate every 4 minutes during each of two – 20 minute games), and assigns the “halftime” activity. The focus of these tasks isn’t just technical; it is intended to create a stable environment. All of the leaders are trained to learn and use each man’s name, make frequent eye contact, and let him know he is welcome. But they don’t force it. The objective is long term relationships, not instant response.
Although the core activity is basketball, it’s not the purpose. Pastor Jeff Ginn often plays, and speaks at halftime when the men gather for a devotional, prayer and questions. After one session, one of the leaders commented saying, “Jeff was so clear in his presentation of the Gospel,” and when he invited men to ‘call on the name of the Lord to be saved,’ about eight men prayed out loud, phrase by phrase, as Jeff prayed.” Three guys were recently baptized, and two others were baptized in the Spring. But most of the players are not believers. Nathan points out that, “Our humanness comes out in the way we play.” This program exposes them to the way Christians play basketball. They can see what men look like when they try to follow God. Over time, he says, “They are changed.”
The basketball is not about winning in the typical sense. “We strive together for God’s glory.  We don’t strive against for self-glory,” says Coach. Nathan assigns players to teams and tries to ensure there are no “stacked teams,” so players know there is no arguing about who’s on which team. There are no championships. Men know when to come, and what to expect. “We’re working on the hearts of leaders and players as they come into [our] community,” says Coach.
Clayton invited Jon Odenwald, a gifted mentor, to help work on this goal. Nathan’s gift for organization creates an opportunity for Jon to freely move among the men when they’re off-court. One of the players asked Jon what his role was. “I’m the social chairman,” Jon answered, to which the player laughingly responded, “Take my phone number.”  Jon did, and later called to follow up.
“When I started, I asked Coach whether I could interact with the men outside of the basketball games. He said, ‘Do whatever you want,’” Jon said.  Jon is excited about the opportunities presented. “They are very good players, but need someone to encourage them, to believe in them, to ask them how we can pray for what’s going on in their lives,” he said. “Most men don’t have close connections. I cheer them on, listen to their stories. I invite them to enjoy a gathering of men – not just for basketball, but for life. I get to show them how God is so important in that journey.”
All the leaders see God at work. Church-sponsored events sometimes have low rates of return.  People show up for food, music or whatever, but don’t come back because there is no core of interest. Men who play good basketball do come back, and they invite their friends. “We average four new guys” every session, Coach reports. “If the churches could do that, it would be awesome. We think it’s a movement of God. We are trying to join Him. Our objective is to transform lives through the gospel. We use basketball as a bridge.”