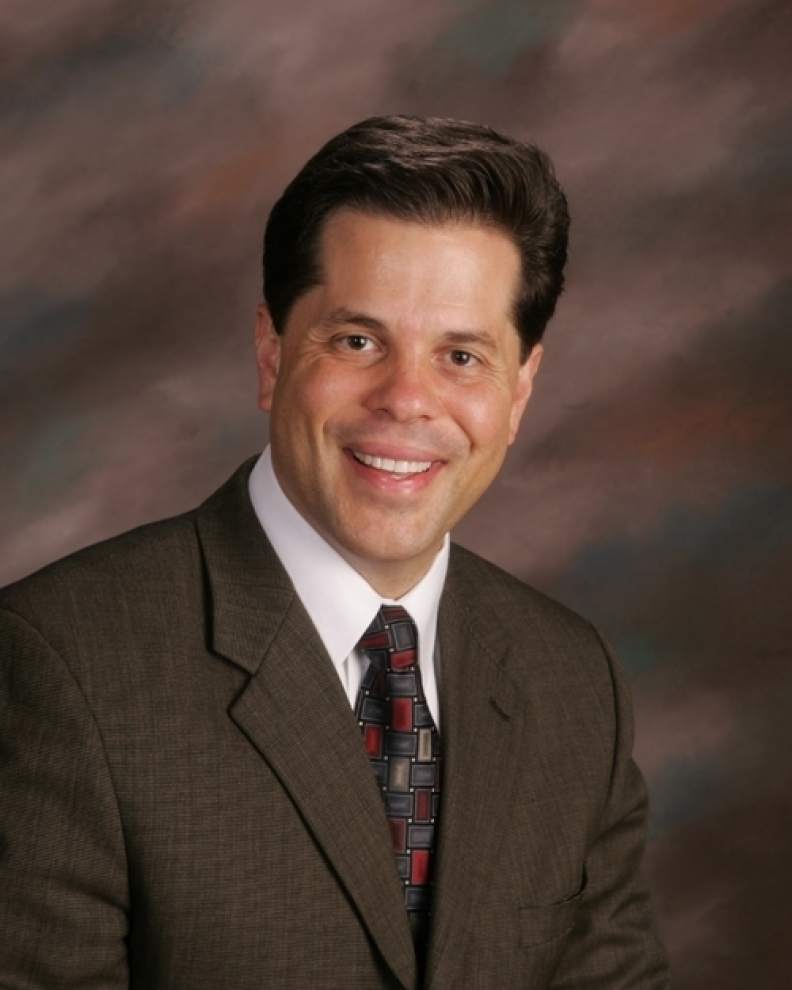 Serving Christ by Serving Others

150 years of ministry leaves quite a story to tell.

by Susan Brown and Photos by Beth Townsend 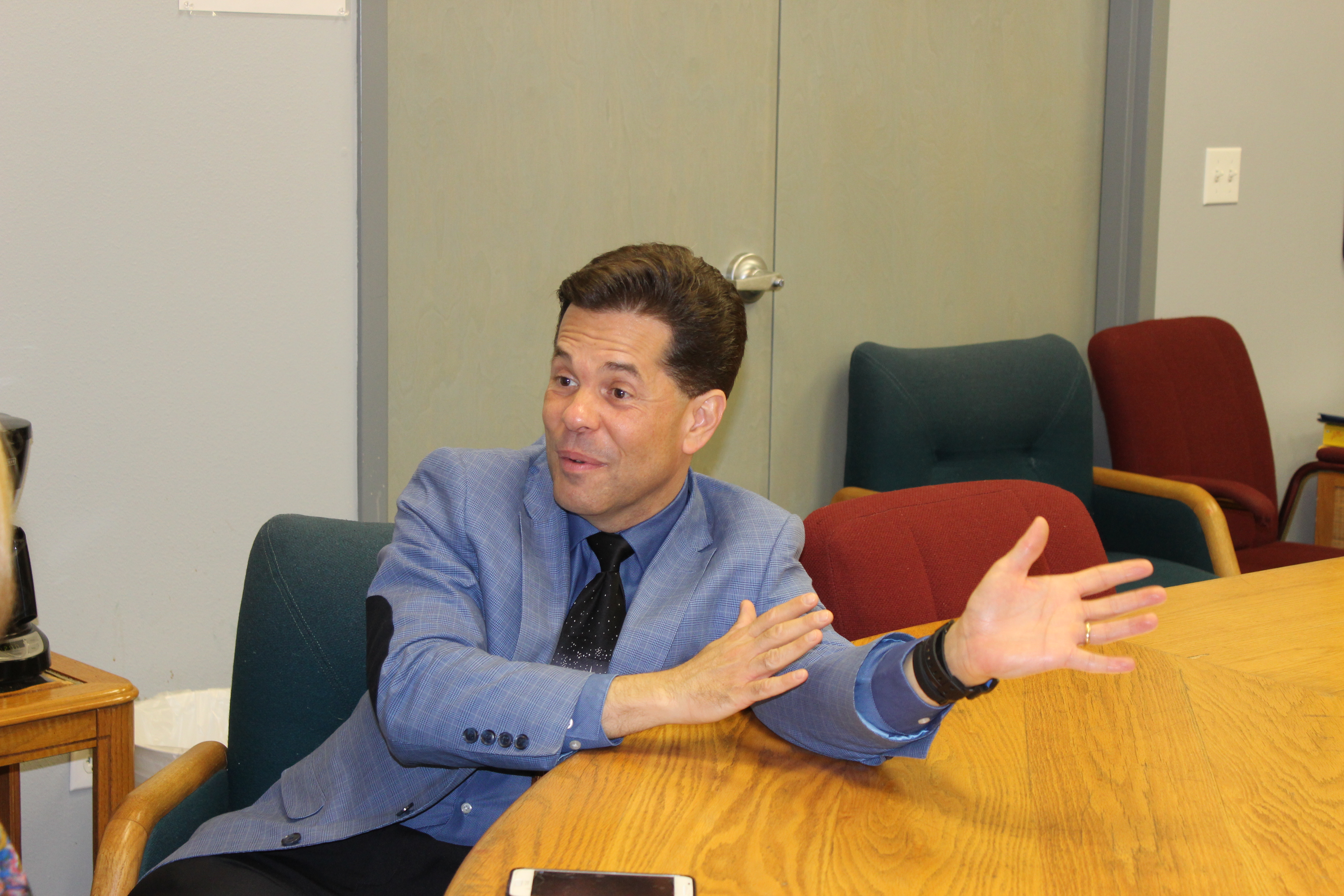 “Any operation or ministry that’s been around for 150 years says a lot about the work. Obviously, God is behind you. It’s amazing to see the generosity of our community.”
In 27 years as Chief Executive Officer for the Society of St. Vincent de Paul, Michael Acaldo has cultivated the agency into a thriving $8 million operation equipped with some 1,500 volunteers per month. As the largest nonprofit in the region, SVdP serves hot meals, provides shelters for homeless men, women and children, operates eight thrift stores and offers dental care, prescription medicine, rental assistance and furniture.
“Our focus is – how do we bring the bright light of God and Christ to those who are truly in need?” Acaldo said. “We are a ministry. A lot of people think we’re a social service organization – no – it’s more people in our community that want to put their Christian faith into action.”
The local St. Vincent de Paul operation welcomes interfaith participation. “We have great support from our local synagogue, the B’nai Israel congregation,” Acaldo said. The congregation provides the popular Thanksgiving Turkey Train. “There’s a lot of good interfaith stuff. I think that’s what our faith calls us to do – to open our arms and be inclusive.”
It was a lesson gleaned from the life of Vincent de Paul [1581-1660], who experienced the stark contrast between extravagance and poverty in pre-revolution France. Born to a French peasant-farmer family, Vincent de Paul’s father sold oxen to send his son to seminary in the hope of future provision for the family. A religious career provided a rare bridge from poverty to financial security. 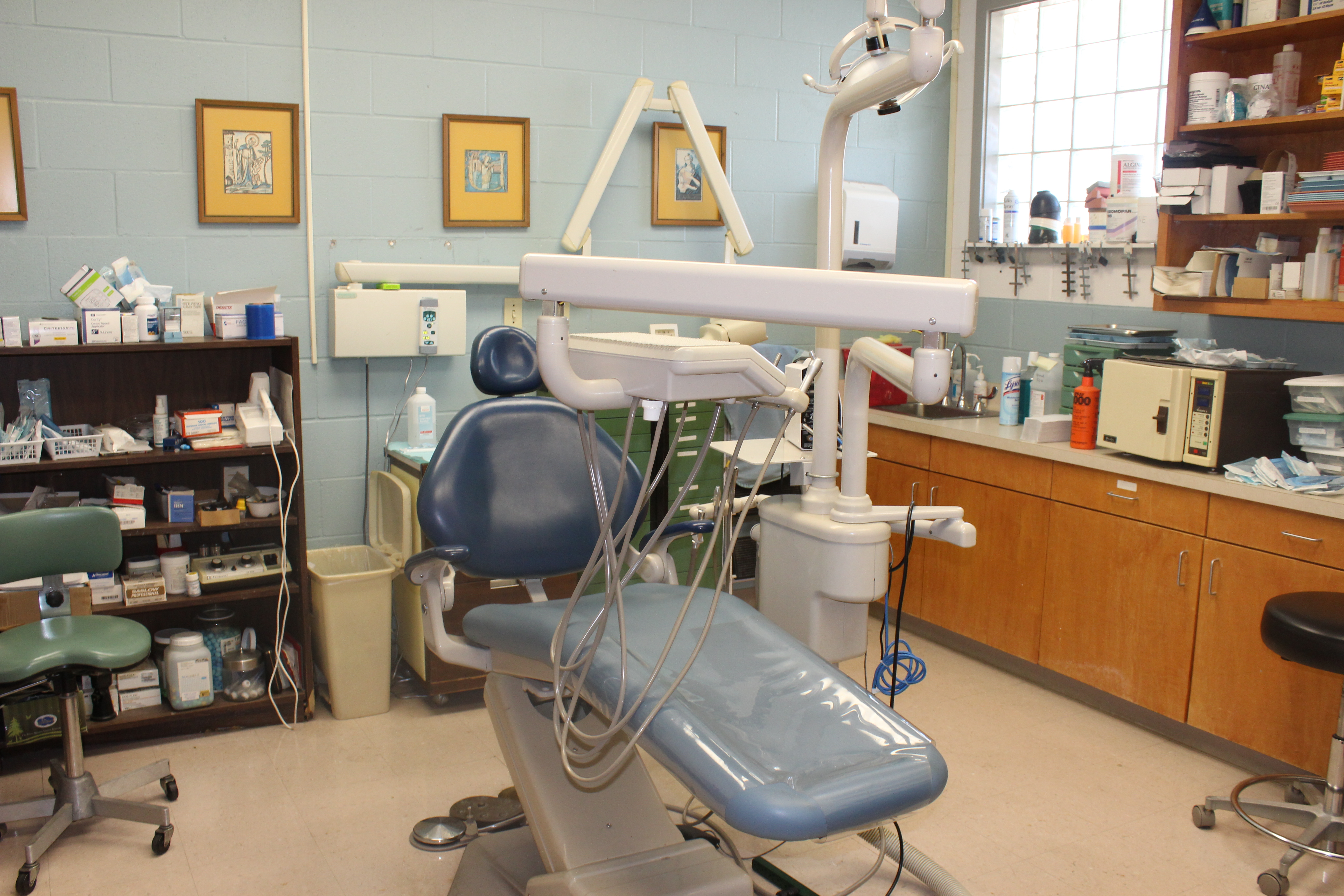 “Basically, he dealt with many of the wealthy, and at some point, he was called to provide last rites to an individual who was dying, someone who was poor and a servant,” Acaldo said. “At that point he used all his connections with the wealthy in France to inspire them to do things for the poor.” That included founding hospitals, tending to those suffering the effects of war, and securing freedom for over a thousand galley slaves in North Africa.  Some 200 years later, university student Frederic Ozanam founded The Society of St. Vincent de Paul in response to a devastating cholera epidemic in post-revolution Paris.
“Everyone is a child of God. That’s how we operate,” Acaldo said. “Our job is to provide a handout in a faith-filled way, so they can feel God’s love. We don’t judge.”
“Twenty-seven years ago, it was rare to see a homeless woman and particularly rare to find a homeless mother and children. Now, it’s common, very common. We’re trying to expand what we’re doing shelter-wise,” Acaldo said. “Also, the severity of mental illness and the number of people suffering from mental illness have increased – we’re just seeing loads of people.”
“A lot of government-type resources have been cut and you see the results,” Acaldo said. “Basically, we have people on the street that are not quite a danger to themselves, not quite a danger to anyone else, but they’re very close. In the past, that kind of person was getting the care they need, and not on the street. In the last four months, we’ve had women come to us and they can’t even tell us their name. If you can imagine it, we have seen it.” 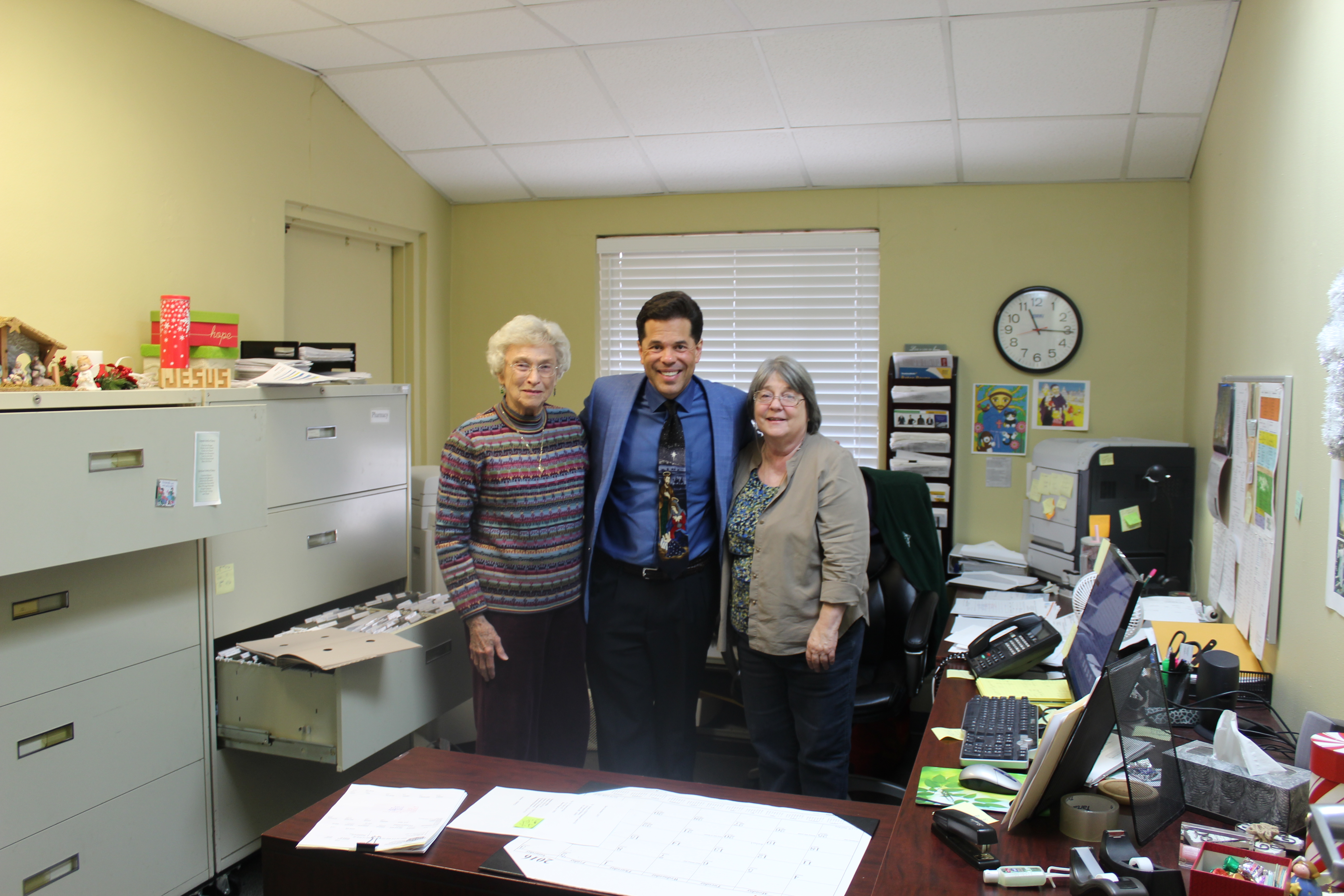 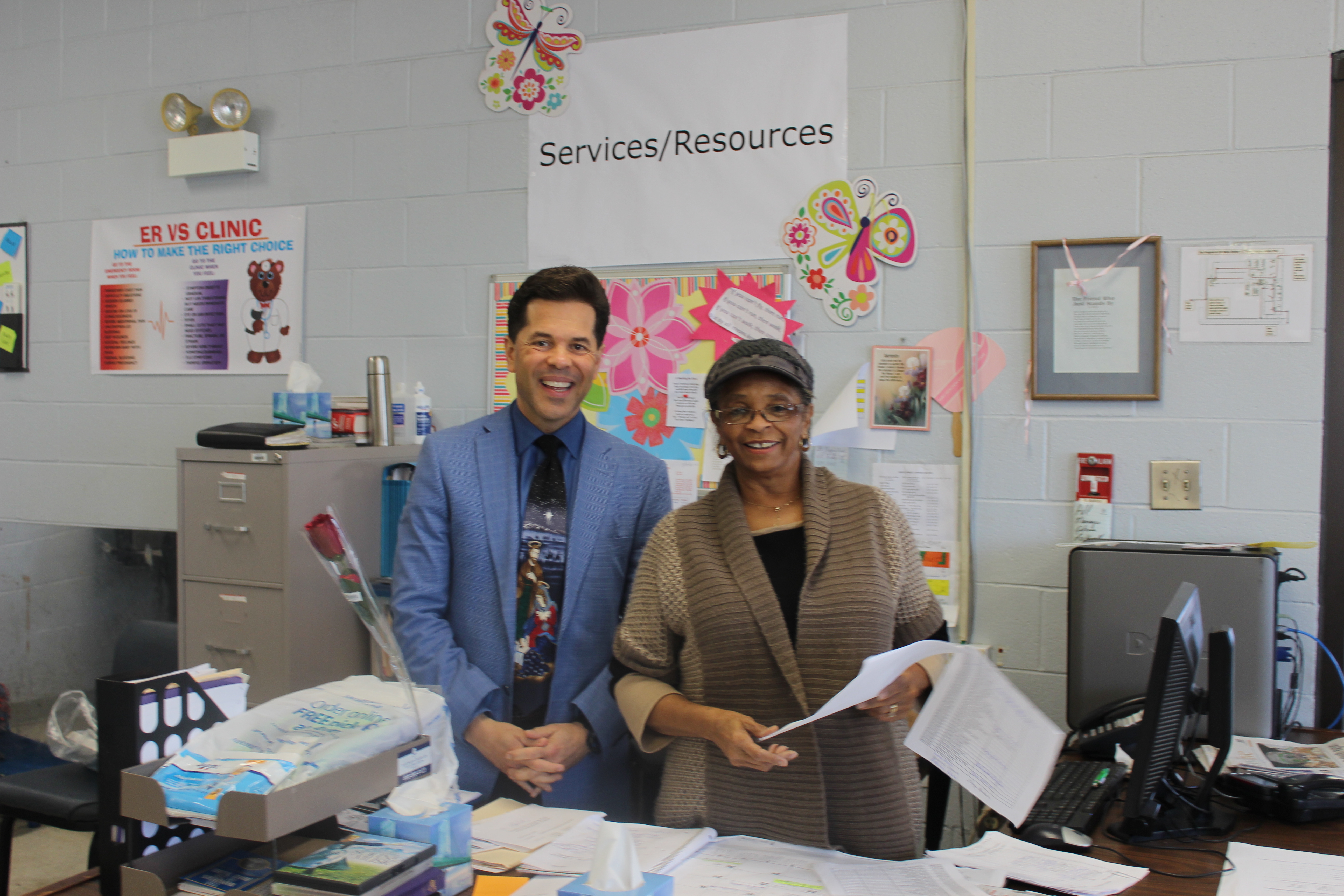 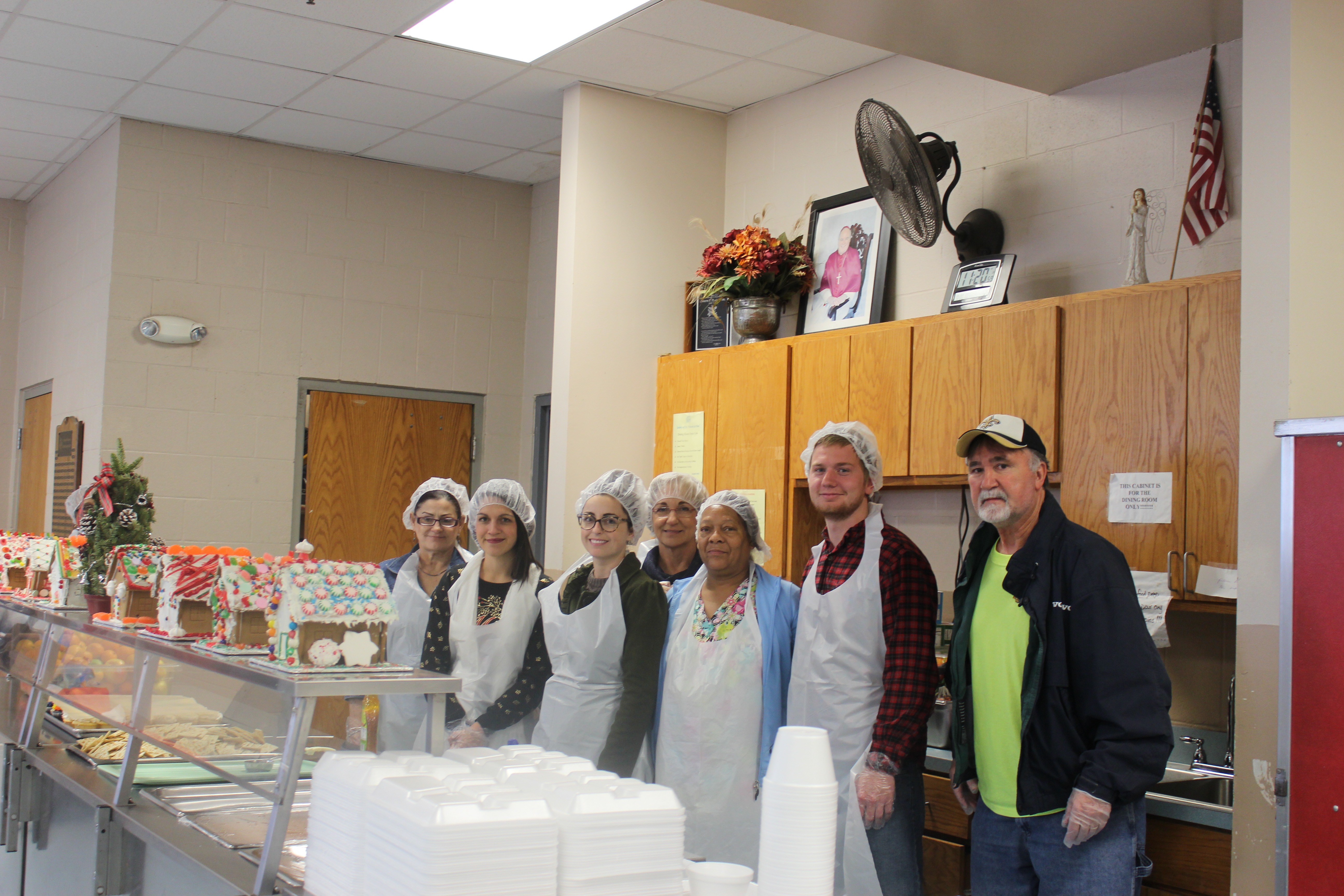 But success stories outweigh the challenges: a mother donates a bag of food to the shelter that once housed her family, an auto parts salesman stops to say thanks for helping him through a rough time, a young mother with three children celebrates school achievement.
“Her boy was in fourth grade and she had lost her job. She had nowhere else to turn, no family, nothing. This little boy won the spelling bee in East Baton Rouge Parish while he was staying at our shelter,” Acaldo said. “It’s uplifting to put people in a position to be successful in life.”
“I’ve heard a St. Vincent de Paul volunteer say on many occasions that we’re called to see the face of Christ in the poor, and if we do a really good job with our work, they’ll see the face of Christ in us,” Acaldo said. That takes an army of volunteers.
Last year 400 volunteers made more than 2,200 home visits and distributed some $700,000 in assistance. Others serve meals, organize donations, repair furniture and electronics, and assist with life skills instruction.
“One thing that’s been uplifting to me is seeing people who take this as a lifestyle – serving the poor,” Acaldo said. “We’ve had people make 70 years volunteering; we’ve had volunteers 50 consecutive years. That’s powerful.”
His wish list includes useful household and pharmaceutical items. “On any given night, we’ve got 100 men, women and children that we’re providing shelter to, and that’s very important,” Acaldo said. On average, SVdP provides more than 26,000 nights of shelter to men, women and children annually. “Individuals can donate blankets, shampoo, towels and prescription medicine, but we also need Ibuprofen, Acetaminophen, and cold medicine that’s high blood pressure friendly.” 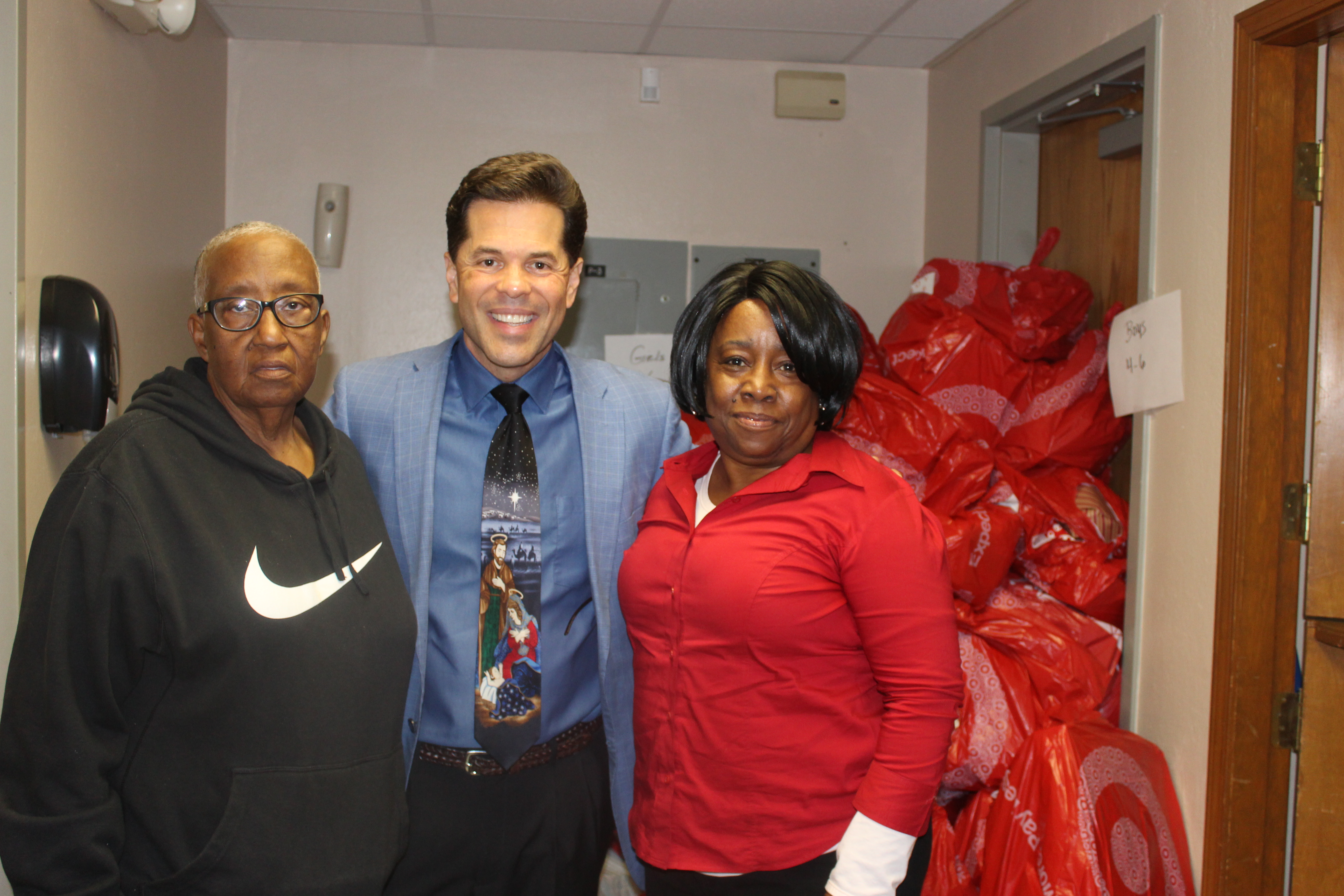 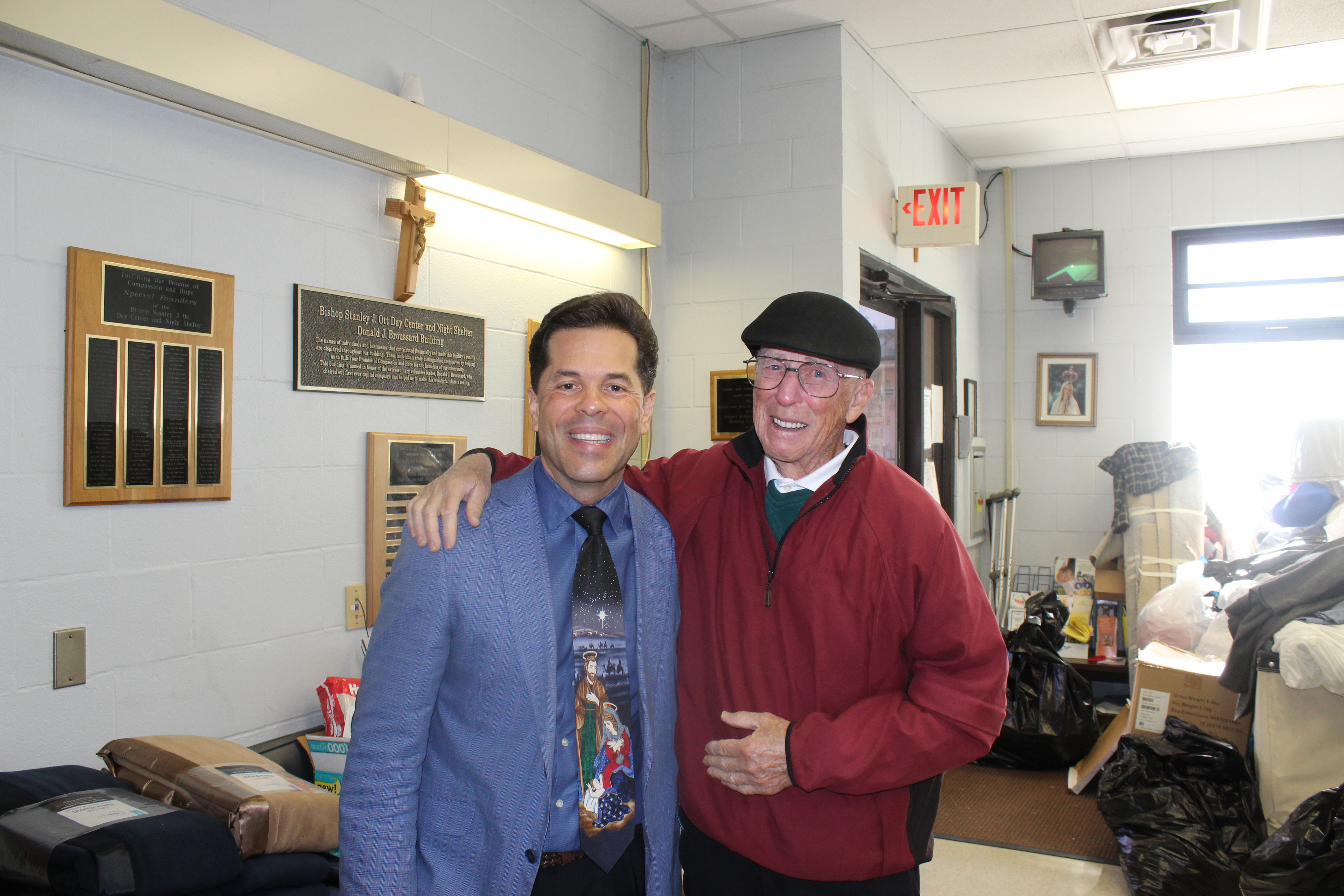 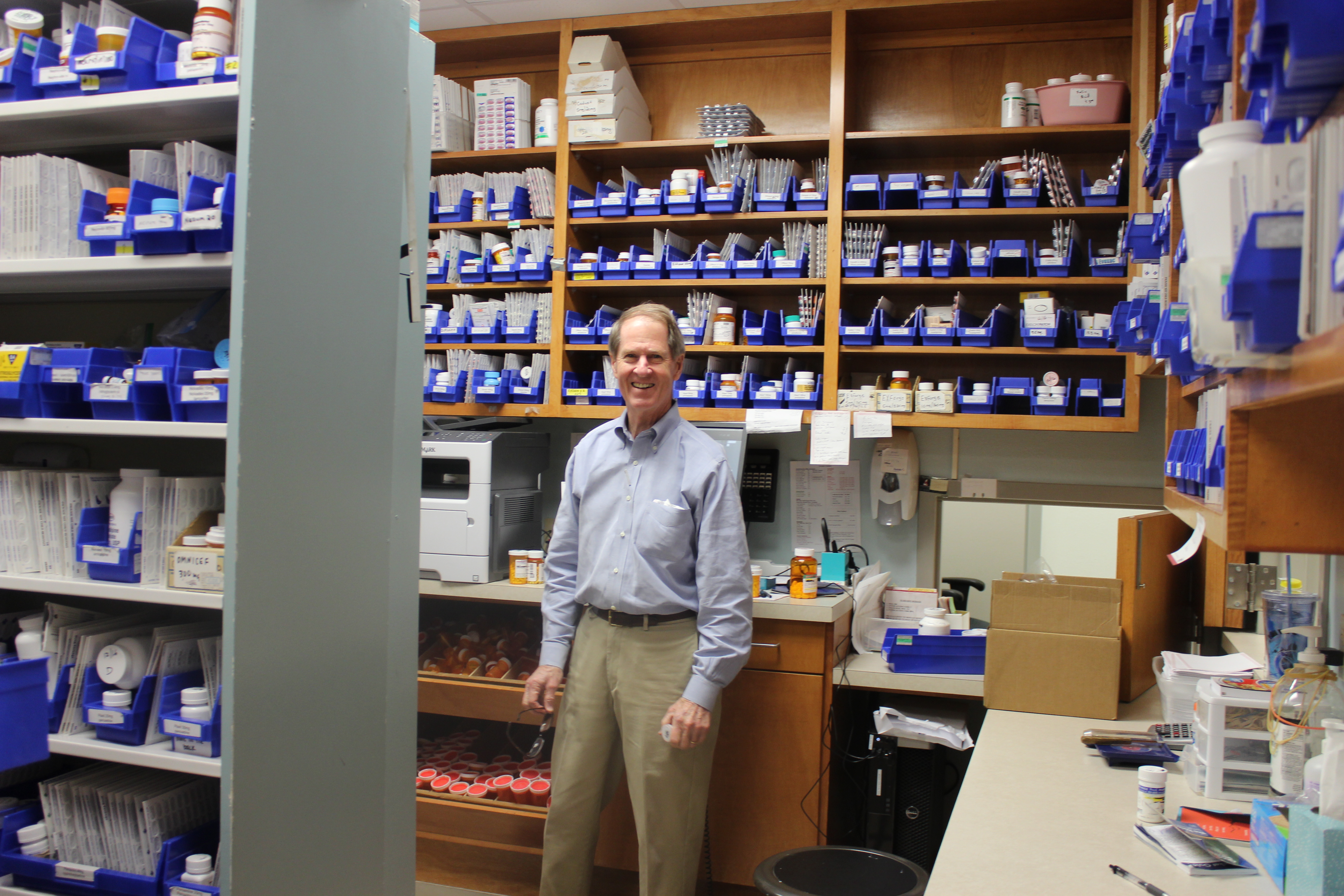 “Obviously, we need financial support. We get some small government grants but about 90 percent of giving to St. Vincent de Paul is by individuals in the community: finances, time, talent, and in-kind goods,” Acaldo said. For example, volunteer Bobby Deangelo and his team buys and fries all the turkeys for Christmas dinner.
“I think each of us is called to see what kind of impact we can make,” Acaldo said. “All the credit belongs upstairs and [to] all the good people that are inspired by God to do this work – if you understand that love and understand where it comes from.”
“I think that is nurtured by your parents (Jay and Dottie Acaldo) who ensure that you walk a life of faith, that you try to recognize when God is having a hand in things. They sacrificed to put us through Catholic schools (Catholic High School, 1985) and for that I’ll be forever grateful,” Acaldo said. “My wife (Paula) is very supportive of me in my ministry. She’s phenomenal.”
“My number one prayer is that I get to retire from here and do a better job than I did the first 27 years,” Acaldo said. His goals include expanding the shelter for women and children from 36 to over 70 beds in 2017.
“We’re also going to put a chapel right in the center of this campus. That’s where God belongs,” Acaldo said. They received a commitment of $100,000, and estimate a cost of $300,000 to construct the chapel.
Acaldo would like to see St. Vincent de Paul property developed to meet pressing needs. Property on North Boulevard – the old Romano’s grocery site – could become a nonprofit supermarket with a second floor for affordable apartments. Land on Florida Boulevard could house auxiliary space for more services and apartments. “God hasn’t made it clear what we’re going to do with the property,” Acaldo said. 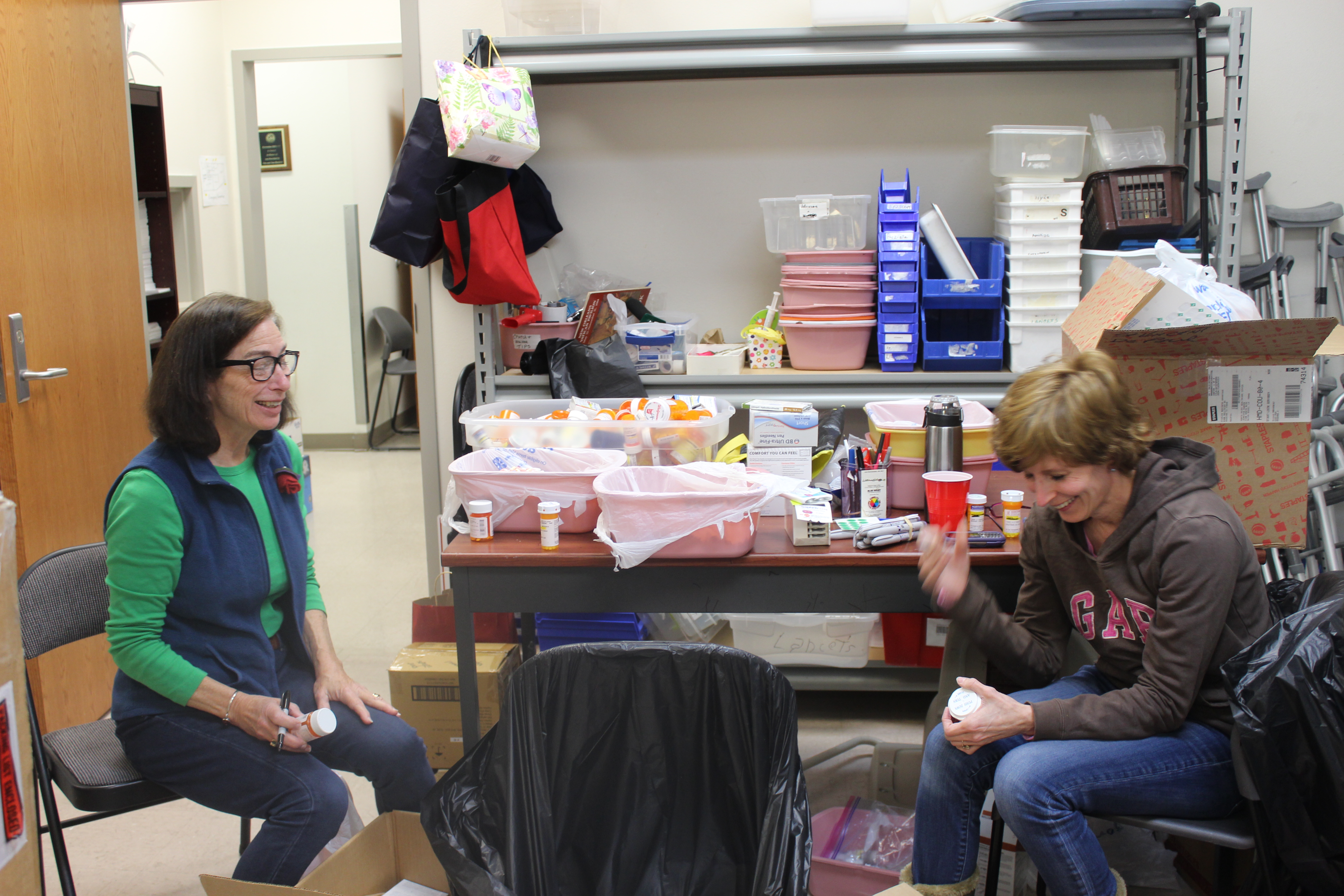 “I would like to see us inspire more people to leave St. Vincent de Paul in their wills, in their estate planning,” Acaldo said. “What a beautiful way to keep something going in our community.” A goal is to build the agency’s foundation to ensure longterm services and to establish a fund dedicated to maintenance and the upkeep of the properties.
It’s all about growth – spiritual and physical. “If you’re not going from where you are to where you can be, you’re not really fulfilling what you need to be fulfilling,” Acaldo said. “We’re all so very busy, and you’ve got to give the
Holy Spirit time and room to work within your life.”
“Christ’s love – God’s love – is ultimately the solution. I think from my standpoint, God is on our side,” Acaldo said. “That motivates you and puts you in a position to be part of a lot of wonderful things, great things.”