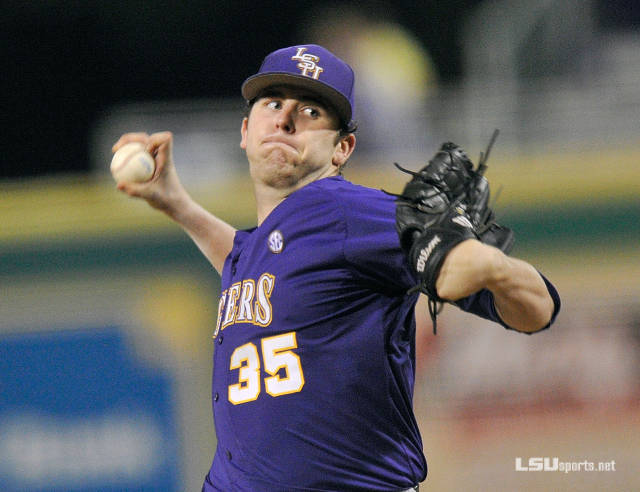 Playing with a Purpose

Story by Randy Rosetta and Photos by Beth Townsend

By its very nature, baseball involves individual effort – and person 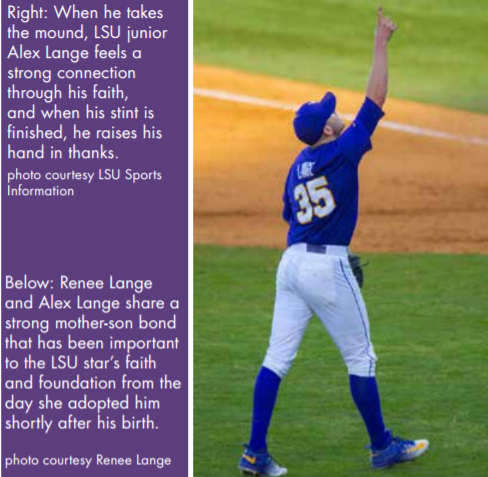 al excellence – for team success. By its very nature, baseball involves individual effort – and personal excellence – for team success. Nowhere is that more evident than in the pitcher’s role. When he climbs onto the mound in the middle of the field, his delivery has an critical impact on the way the game will unfold: one pitch, one batter, one inning at a time. It’s a daunting responsibility. But LSU star pitcher Alex Lange never considers himself alone when he takes the ball.

Lange began his junior – and likely final – season for the Tigers on Feb. 17. He drew a cross in the dirt of the mound, took off his cap several times and said a quick prayer, a practice that marked each start in his college career. When he exited the field, he thrust his arms upward. The symbolic gestures are tributes to the deep faith that his mother, Renee’ Lange, helped instill in him – a powerful thread that ties all things together for the 21-year-old pitcher.

“It’s the foundation of everything there is in the world today,” Lange said of his faith. “It’s how the world came to be. It’s who we are as Christians, to believe in the Lord, and everything I have
today is because of Him. And I am eternally 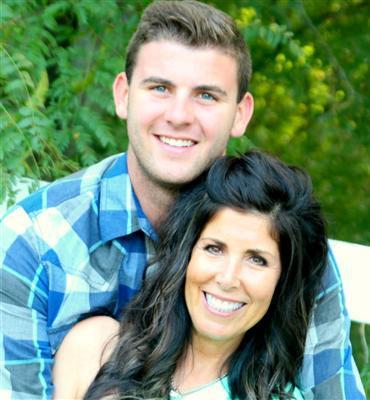 grateful for that. I’m undeserving, but it’s awesome the kindness Jesus has for us.”
“I just try to integrate it in every part of life. The Bible talks about always helping others and honoring the Lord in everything you do. There’s no difference on the field,” he said.

Lange’s faith journey began in earnest when he was a teenager at Lee’s Summit West High School in suburban Kansas City. He had observed churches of different denominations, an eye-opening experience that his mother, Renee’, encouraged. Although he immediately bought into the concept of salvation – loving Jesus and all He stands for – Lange concedes that he had not fully embraced “the whole spiritual thing.”
“I knew who Christ was, but I hadn’t been following Him,” Lange said. “I was stumbling in the dark.” During a Fellowship of Christian Athletes event in high school, Lange began to focus on Christ.

Lord and Savior. Just raise your hand.’ I was kind of hesitant, and my friend grabbed my hand and raised it, and that’s the day I accepted the Lord. It was a Tuesday morning my sophomore year.”
“That whole day was just different,” Lange said. “I walked around with my shoulders high and had a big smile on my face. It was just different. That’s kind of the way I’ve felt ever since.”
Lange credits his mother for nurturing his faith and abilities. “I wouldn’t be here without her,” he said. “She raised me well, and I am thankful for her. I am thankful that the Lord used her to help me grow and continue to grow and lay the foundation in college and become my own man. Hopefully, when I have kids I can do the same thing.”
“From the first time I sat down and spoke with Alex, it was clear to me that he was a special person,” LSU coach Paul Mainieri said. “His maturity, his confidence and just the way he carries himself – those are things that take a lot of guys a while to develop when they get to college. Alex had all of those when I met him – when he was 16 years old – and a lot of that is a credit to his mother.”
“When you are in this profession, you really try hard to judge the kid for who he is and not for what his upbringing was, and that works in both directions,” Mainieri said. “With a young man like Alex, after you get to know him, you see the influence his mother has had on    him and you see how he developed the way he did.”
Simply put, Renee Lange and her son believe they were meant to be mother and son, and they live their lives that way. She adopted Lange when he was 1 day old and she was a 31-year-old who had been told she could not bear children of her own. What biology didn’t create, love for each other and a strongly shared faith have forged. At the age of six, his parents divorced, and Lange and his mother established a home in Kansas City.
Today, Lange does not sit back and wait for people to recognize what God and faith mean to him. “Some people shun Christians and the Christian lifestyle,” Lange said. “It’s too over the top, it’s too much. It’s too much if you’re not willing to fight for what you believe in and stay strong. I am not going to sit here and say I’m a perfect Christian – I’m far from it. I sin every day. We’re all sinners…just learn from your mistakes and continue to grow in your faith and get better at it every day like you would a sport or school or piano.”
Lange’s practice of wearing his religion on his baseball sleeve is not unique. While it’s perhaps not in vogue, other players have been bold in their witness, including former teammate Jake Fraley.
A devout Catholic, Fraley never hesitated to profess his beliefs to teammates. Not surprisingly, Fraley and Lange quickly established a strong bond when Lange was a freshman in 2015. That example stuck with Lange, who has stepped into the role Fraley vacated as the de facto spiritual leader for the Tigers.
“Everyone has their own beliefs and everyone is entitled to their own opinions,” Lange said. He makes a point of not criticizing others’ beliefs. “For me, I just want to put my arm around a guy and say, ‘This is what Jesus can do for you. He gives forgiveness for everybody. There is forgiveness for your sin.’ If that is bringing them to a Bible study or just talking to them or whatever that is, there is a sense that they can jump on board if they want to.”
“Obviously, I’d like 35 guys in that locker room pointed in the same direction, but that’s not always the case,” Lange said. “So, you just kind of have to balance it and know who your friends are; know who you can align yourself with that feel the same way and believe in the same thing.”
Whether teammates – or anyone else – chooses to follow, Lange said he is going to keep doing what he does. So, whenever he steps on the mound this season, he’ll draw that cross. He’ll take off his cap and say a quick prayer. And when his outing is over, he will look skyward, lift his arms and say thanks.
“It is a reminder of who I am playing for and what it is (the cross). That’s why I have a tattoo on my arm, a tattoo on my chest. The cross is always a reminder, so if one person every game sees that, then I get 18 people to reach out and be curious about what Jesus and the Lord can do for them, then I feel accomplished,” he said.

“I look up and I just thank the Lord for the trials and tribulations or the successes of that day. The Bible talks about giving thanks no matter what. If the worst thing that’s going to happen to me is going out and giving up five runs in 4 innings that day, that’s OK with me because that’s His plan. I’m going to follow his plan. I’m not going to try to deviate from his plan and create my own plan because then I am not living through Him. It is a reminder to thank Him for allowing me to be out there and doing something I love, because I know without Him it would be nothing.”
“Every time I go out there I want to shine for Him, shine for the Lord, show that it’s not about me,” Lange said. It’s about what Jesus can do for us and (to) honor Him through my playing.”

Randy Rosetta has been a journalist for 30-plus years, primarily covering sports but dabbling in news and feature coverage on a freelance basis. A proud Kansas native, Rosetta is currently the Sports Editor of the Livingston Parish News, the largest non-daily newspaper in Louisiana, and he is a member of Istrouma Baptist. He and wife Jenny Rosetta, an instructional specialist in the EBR school district, have been married 18½ years and are the proud parents of 17-year-old Mallory, a junior at Parkview Baptist, and 9-year-old Darby, a 3rd grader at LaSalle Elementary