A Fruit of the Spirit

When reading this scripture, I noticed that just two of the nine fruits of the Spirit are somewhat negative: long-suffering and self-control. I believe that we should pay special attention to these two fruits of the Spirit because they reveal a lot about our character.

Exodus 34:6-7 says “The LORD, the LORD God, merciful and gracious, long-suffering, and abounding in goodness and truth, keeping mercy for thousands, forgiving iniquity and transgression and sin, by no means clearing the guilty, visiting the iniquity of the fathers upon the children and the children’s children to the third and the fourth generation.” (NKJV).

Forty years ago, I discovered this principle the hard way. Playing football at LSU in the 70’s, I found myself in serious trouble due to a lack of character. Not realizing that God had a purpose for my life, it took a long time and a lot of heartache for God to develop character in me. Raised in a home that had a lot of drinking and partying, I was not exposed to a lot of good character and integrity. After the Nebraska game in Tiger Stadium where we tied them 6-6, I went out partying and acting crazy, got drunk and got into a fight where I stabbed a man.

From that point on, God had my attention and that is when I turned my heart to Christ at Chapel on the Campus at LSU. Still facing a trial and jail time, God started working on the inside of me. Long-suffering was one of the fruits that God began to develop in my life. Forty years later I realize that God is the One who is long-suffering. There was so much that needed to be worked out in me besides what I faced with the law. After the trial, in which I was convicted of attempted manslaughter and was facing jail time, the Lord really had me.

Unable to go anywhere or do anything, I started reading my Bible. The Bible came alive to me for the first time.  Someone told me to start with the gospel of John and when I got to John 15:7, a light came on. John 15:7 says, “If you abide in Me, and My words abide in you, you will ask what you desire, and it shall be done for you.” (NKJV). I started declaring this verse and praying that God would release me from jail. Six months later, the police came in late one night and said, “Rusty Domingue, you are the only one free to go.”

Rejoicing as I left, I said, “God, I will go wherever you send me.” I didn’t really understand what I was praying then, but looking back, I am in awe of what all the Lord has done. It really is a miracle. I went back and got my degree from LSU and then went to Dallas, TX to get a two-year practical theology degree. After that, Dr. Jere Melilli from Christian Life Fellowship called me and asked me to be the youth pastor. The next 13 years at Christian Life is where the Lord began to really deal with me in long-suffering. I realized that God sent me to Christian Life to work on my own heart and character through pastoring people.

In 1995, I moved with my wife and two children to Nairobi, Kenya to be missionaries. We worked for a church called Nairobi Lighthouse and what an incredible experience that was. Today I’m a full-time missionary evangelist. I have had the opportunity to work on projects such as the earthquake in Haiti, the tsunami in Sri Lanka and have helped with starting churches in India. We are also getting ready to finish a church building that we started in 1985. God has done incredible things and has been faithful every step of the way.

As you walk with God, He will use things in your life to produce the fruit of long-suffering. As we allow Him to teach us and mold us, we will walk in a grace towards others that allows us to see people the way the Lord sees them. Ephesians 4:1-2 says, “Therefore, the prisoner of the Lord, I beseech you to walk worthy of the calling with which you were called, with all lowliness and gentleness, with long-suffering, bearing with one another in love.” (NKJV). Let the Lord mold you today through patient endurance and long-suffering so that you may become more like Him. God has a plan for your life!

Russell “Rusty” Domingue was born in 1954 to French parents, Mr. & Mrs. Freddie Domingue. Raised with his older brother, Joe, in Port Arthur, Texas, the Domingues were Catholic, though not devout. Having few interests, Rusty’s brother who played baseball for the Farm Team of the Houston Astros, encouraged the younger Domingue to play football. Recalling being angry for most of his adolescent life, Rusty played football for Thomas Jefferson High School with an intensity and skill that led LSU in Baton Rouge to recruit him to the Fighting Tiger Team on scholarship in 1973. Rusty’s testimony of the success he enjoyed through football at LSU and his later conviction in 1976 of attempted manslaughter and immediate conversion, is one of god’s undeniable grace and Love. after serving a miraculously short six month prison term, he was released and soon after moved to Dallas, Texas, where he attended Bible School. in 1983, the Lord led Rusty back to Baton Rouge again…but this time to Christian Life Fellowship where he served as associate Pastor along with Dr. Jere D. Mellili, Pastor. in addition, he served as Spiritual Life Director for Christian Life academy, coached the school’s football team, led a daily intercessory Prayer group at 6:30 AM, and held a College group on LSU campus called Living Waters Fellowship where many of the students are now in full time ministry. He also led the missions program for the church leading teams to India, Peru and Africa to build churches and help the poor. He moved to Nairobi, Kenya in 1995 with his wife and two kids to be missionaries. They worked on the Hatti earthquake, Sri Lanka tsunami and built over 30 homes. The 6’1” and 210 lb. former linebacker is today fighting spiritual warfare – not blocker – and is saving souls-not games! 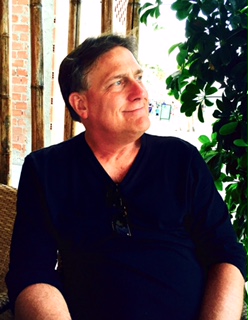