“I’ve always heard and believed in the verse, ‘Be still and know that I am God.’ I’ve always believed that out of that stillness, you can hear the breath and words of God.”

With a passion built on faith and burnished by trials, Donna Edwards believes in prayer.

“You walk by faith – and a lot of prayer,” she said. “John Bel and I pray in the morning before he leaves. We pray together.” That’s the one message she would like to instill in younger women: start your marriage with prayer. Prayer builds unity and helps us through the tough times. Prayer opens our eyes to the reality of God’s work around us and invites us in.

“One of the things that God has really laid on my heart is to love your neighbor,” she said. That commitment motivates her to reach out to the most fragile and vulnerable, including children in foster care, those with special needs and victims of human trafficking.

At a recent Women in Spirit luncheon at St. Joseph Cathedral, Edwards said the I-10 corridor from Texas through Louisiana has contributed to an astonishing rate of human trafficking. “The stories – it is just unbelievable,” Edwards said. “We have a lot of events in New Orleans, so a lot of these young girls are brought to the city. We should all be eyes and ears and look out for signs as we travel all throughout the day,” she said. “We’re already making lots of headway teaching people in the hospitality profession how to acknowledge and recognize what they can do to save these girls.”

According to the National Human Trafficking Hotline, more than 100 human trafficking cases

related to Louisiana were reported in 2016 [https://humantraffickinghotline.org]. The governor’s office reports that Louisiana State Police investigated 27 human trafficking cases in 2016 and rescued 19 victims, 16 of whom were under the age of 18.

While the Houston to New Orleans highway has one of the worst human trafficking records in the nation, Louisiana is an acknowledged leader in the fight to curb the crime. “We were honored to meet the pope in an incredible visit to talk about human trafficking, and it was such a joy,” Edwards said. They traveled to Rome in conjunction with the Hospitaler Sisters of Mercy, who last month opened Metanoia House to help rescue girls under the age of 18.

“One of the things I want to point out about human trafficking and other issues is that they really show how the faith-based community can work with the state and come together to address these issues. She’s seen the same cooperative success in foster care.

“I never thought in a hundred years that I would have been talking about human trafficking and foster care. Be open to God’s Spirit. He does guide us. You’ve just got to listen,” she said.

An avid supporter of adoption, Edwards believes there is a permanent family for every child, including those with special needs. In 2016, she recognized a milestone: more than 700 foster children were adopted in a one-year period, the highest rate ever recorded in Louisiana.

As a pro-life advocate, Edwards works for more than simply an end to abortion. “I believe that

pro-life goes the whole life, from womb to tomb and all between,” she said. That includes Medicaid expansion and programs that support mothers and children.

“The truth is, we all have trials and triumphs and things we go through, and we rely on Christ,” she said. The Bible tells us we are children of God and we should have childlike faith, an absolute dependence on God and belief in the power of prayer.

Their oldest daughter, Samantha, was born with spina bifida. “The doctor encouraged me to abort her at 20 weeks,” Edwards said. “God put an amazing man, my husband, in my life to stand with me as a rock, and we got through that trial. And she’s a beautiful, lovely 25-year-old woman today.”

But the challenges continued. A month after Samantha’s two surgeries, Edwards delivered her second daughter, Sarah. “My uterus ruptured in the middle of delivery, so we both almost lost our lives,” she said. The doctor told her she would never give birth again, but she became pregnant with her third child, John Miller.

“One of the things I do every day is say, ‘God let me be your vessel,’ to fill me up. We so much want to control what we do,” she said. “Allow God to be a part in your life that day.” She begins every day with scripture and other inspirational reading. 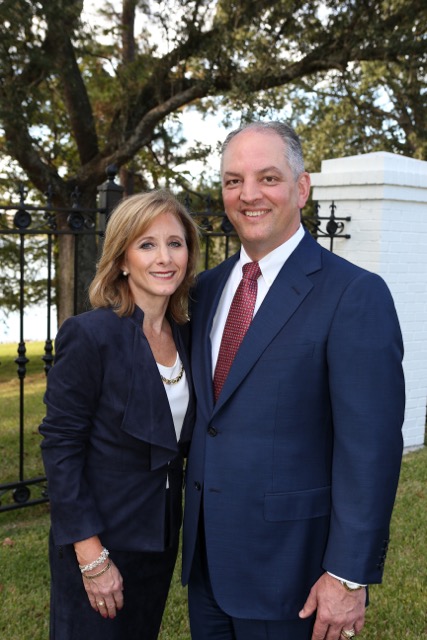 “The doctor called me and said, ‘Donna, I just want you to be aware that a test came back that

shows you have a high percentage of this child having Down’s Syndrome.’ I just smiled and said, ‘You know what, I’ve broken every odd, and whatever the outcome is, I will trust God to get us through.’ And I never really wavered.”

Then, when her father-in-law was 70 years old, he was told he must be removed from the heart transplant list. “It was the year that Pope John Paul died, and we decided to do the nine-day Novena for divine mercy,” she said. “And after the end of that Novena, Monday, he got a call and received a heart from Ochsner’s. That just transformed our whole family into a huge believer in the power of prayer.”

“I do want to say, and I mean this: Don’t stop praying for us. Sometimes we forget to keep praying when everything’s good. That’s what keeps us up,” she said. One of the most memorable experiences of their visit with Pope Francis was his personal request for prayer. “He asked us three times, John Bel and I: ‘Please pray for me.’ And I thought, wow. You really know that’s what holds you tight.”

One of the things I do every day is say, ‘God let me be your vessel,’ to fill me up. We so much want to control what we do,” she said. “Allow God to be a part in your life that day.” She begins every day with scripture and other inspirational reading.

Each year, she asks God to give her a word to study and share. During the 2015 campaign, her word was “believe.” “It took both of us to run really hard, and obviously, it was successful, but I remember sitting at St. Louis Cathedral the night of the election, nervous, and it was raining, and the outcome of voters wasn’t happening. And so, we just sat there, and I kept thinking, ‘Lord, just give me something to hold on.’ It was like a quiet whisper, ‘Just believe.’ So, okay, I’ll believe. And believe doesn’t necessarily mean it’s going to be your outcome. It just means believe in me and trust in me and I’ve got you, whatever happens.”

Last year, her word was “trust.” “It was a very big challenge for all of us: those who were flooded, the shootings and the tornado. I had a wedding last year and the inauguration. It wasn’t easy. There were a lot of times when I was just scared. A lot of things happened that worried me. That’s when you open up that book, that Bible, and you go to the word of God and you really just rely on him. That’s faith. That’s what got us through.” 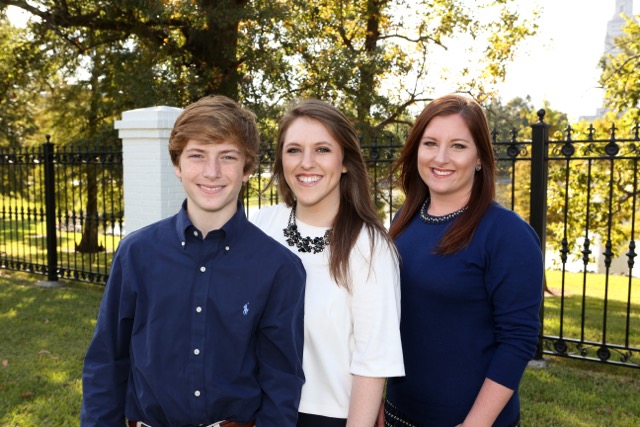 Her word for 2017 is “obey.” “Obey can be anything from obeying the word of God, the

scriptures, to obeying the Ten Commandments. But also, there’s that little voice that sometimes comes to us and says ‘Reach out to her,’ or ‘Why don’t you go and say a prayer with her?’ And when you do, I feel like God just opens a little door for you. It empowers you and gives you that trust.”

God didn’t tell us who our neighbor was, and he didn’t define what they look like and who they are. We’re all children of God. I think that we, as Christians, really haven’t done a good job in showing others Christ because of the way we treat people and the way we point our fingers and condemn – judge. I know that’s not what God calls us to do. You don’t always have to agree with somebody, or their lifestyle, or who they are to love them. And I think that’s where people’s hearts are changed, when they see the love of God that we show them.

One of her favorite quotes comes from St. Therese of Lisieux during a year she explored more deeply the love of God and love of neighbor. “There is one only thing to do here below: to love Jesus, to win souls for him so that He may be loved. Let us seize with jealous care every least opportunity of self-sacrifice. Let us refuse him nothing – He does so want our love.”[1]

“And the truth is, we all have trials and triumphs and things we go through,” Edwards said. “We rely on Christ. And we get through those together by lifting each other up and by taking each other’s hands.”

Editor’s Note: Donna and John Bel Edwards met in Amite, LA where they became high school sweethearts. Donna graduated from the University of Southern Mississippi with a B.A. in Business Administration and John Bel graduated from the U.S. Military Academy at West Point. They married in 1989 and served eight years as a military family. While raising children, Donna became a certified teacher and taught music for over eight years in the public school system.

Three Things No One Tells You About Discovering Your Purpose﻿

A Night to Remember, “Then Jesus walked in…”

A NIGHT TO REMEMBER Darkness was setting in. The street…