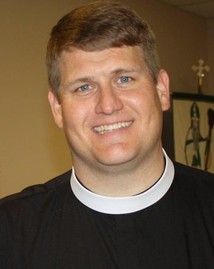 Before I began seminary, I was involved with a prison ministry. This ministry takes place over a weekend. The days are long, starting at 7 a.m. and not ending until 9 p.m. The agenda for the weekend is packed, start to finish. It consists of talks, followed by small group discussions that center on God’s goodness and love for the 42 incarcerated participants. The team that makes these weekends possible consists of 45 people from the “free world” and 30 inmates, or “inside helpers” who have previously attended one of the weekend events and continue to demonstrate service and leadership within the walls of the prison.

During one particular weekend, between talks, while the participants were outside in a large tent having group discussions, I was sitting by myself in the chapel. It was springtime so everything was blooming and the air was full of pollen. As a result, I was suffering from a terrible sinus headache — one of those right behind your eyes, which makes you feel like your eyes could pop out at any moment. As a visitor inside the prison, I was not allowed to bring any medication in and the dose from earlier in the morning was wearing off. Instead, I asked that the lights be turned off for a moment. I just sat there with my head down and my eyes closed, wondering if I was going to be able to make it until the end of our activities.

While I sat there, one of the inside helpers asked, “What is wrong?”

I responded, “Hey, it’s no big deal, I simply have a headache.”

“Well in that case, I am going to say a prayer for you,” he replied.

Before he began praying, he motioned for the other three inside helpers, who were working to set the chapel up for the next activity, to come and pray with him. There we were, me sitting in a chair and these four inmates standing over me, laying their hands on my head and shoulders.

I found myself lost in the words of the prayer, and to this day, I have no idea how long the prayer was. While he was praying, unseen by me, others began to quietly join the circle. By the time he had finished, I was surrounded by the entire group — 44 men from the free world and 72 prisoners. When the leader finished praying, the group’s resounding “Amen” startled and surprised me. This act of service and kindness was completely unexpected and it changed the tone of the rest of the weekend.

Reflecting upon these events, a few things have emerged for me. First, the Book of Genesis, after six days of creation, reads: “God saw everything that he had made, and indeed, it was very good.” (Gen 1:31) God’s creation is rooted in God’s goodness. As the author of the Acts of the Apostle writes, “in [God] we live and move and have our being.” (Acts 17:28) This was certainly true for me that spring day inside the chapel surrounded by prisoners. The goodness of God is not limited to our particular religious views, political opinions or any other notion we may have. The goodness and love of God is the underpinning for the whole of creation and is often encountered in unexpected and surprising ways.

Second, one of the primary ways in which we encounter and participate with God’s goodness and love is by serving others. This also was true that day in the chapel. In his letter to the Ephesians, the Apostle Paul wrote, “I became a servant of this gospel by the gift of God’s grace given me through the working of his power.” (Eph 3:7)  Like Paul, the prisoner’s willingness to be a servant allowed him to receive God’s grace, which empowered him and everyone present to experience God’s goodness and love in a powerful way.

This experience, along with others, has taught me that when we are willing to be servants first, we are swept up into the work that God is doing — allowing us not only to experience the goodness and love of God but also empowering us to be that which we were created to be —  expressions of God’s goodness and love in the world.

The Rev. Ashley Freeman lives in Zachary, La. with his wife Annie and their three children, where he is the rector of St. Patrick’s Episcopal Church. He attended Seminary of the Southwest in Austin, Texas, where he graduated in 2015. Ashley grew up in Fairhope, Alabama and was active with the Kairos Prison Ministry while living there, from 2007-2012.