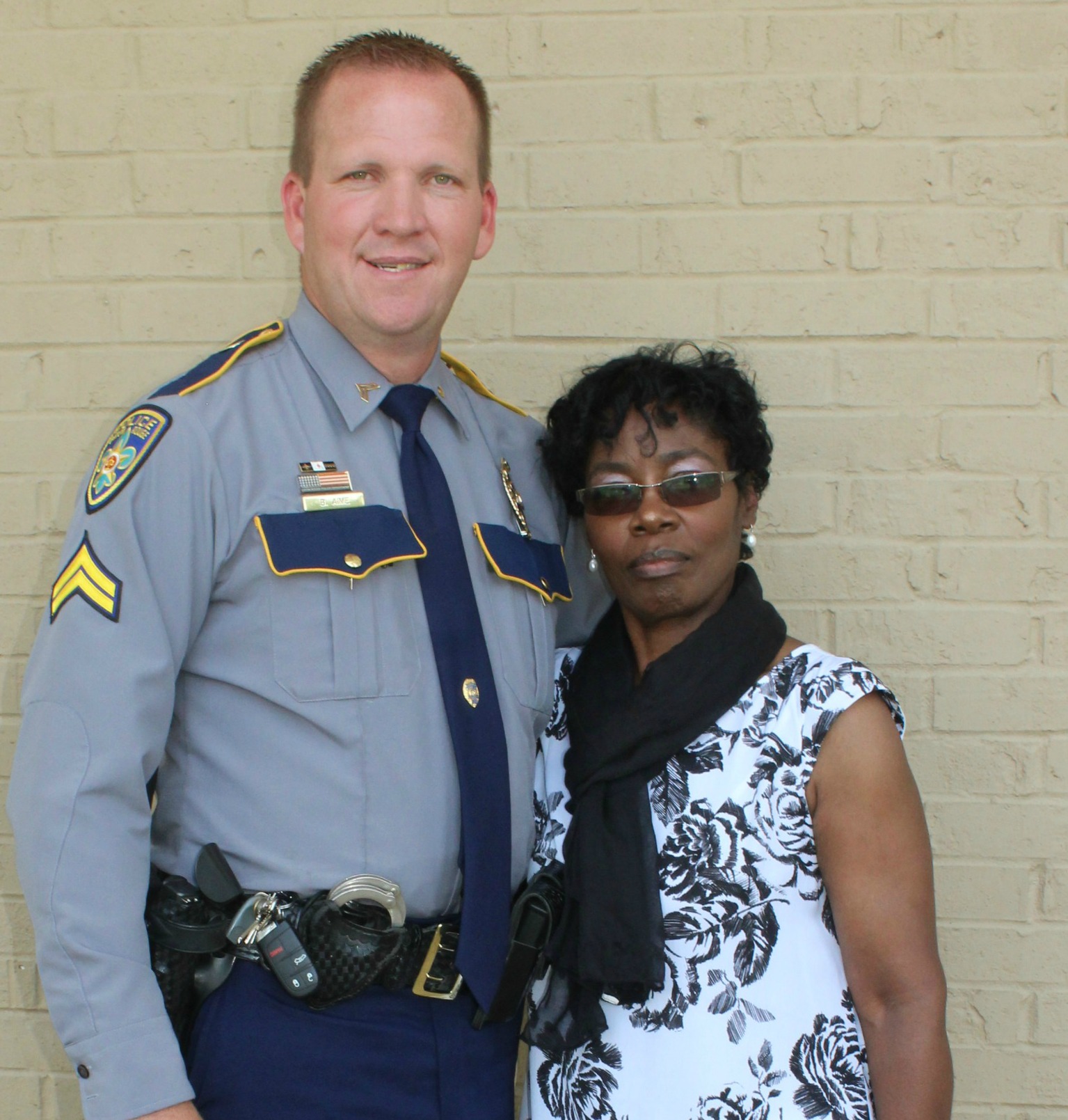 vickie Williams-Tillman is a hardworking wife, devoted mother and proud grandmother of six. she works as a clerk at st. Jude the Apostle school during the day, cleans offices at night and divides her spare time between church, family and friends. on the surface, her life seems relatively normal, but she is a certified hero.

On the morning of Sunday, February 19, while headed to the grocery store, she turned off Airline Highway onto Harry Drive. She suddenly noticed something near the roadside. A bloodied police officer was struggling to subdue a suspect in an empty church parking lot. In a split second, WilliamsTillman followed an impulse that wound up saving that officer’s life.

The embattled policeman was Billy Aime—a twenty-one year law enforcement veteran. When Williams-Tillman found him, he was trying to subdue an aggressive man who had just taken a hit of heroin. The situation was wild, and the suspect was desperate to avoid arrest—biting, hitting and even using his fingers to tear at the inside of Aime’s mouth.

Aime, who stands well over six feet tall, said, “First, he hit me with my baton, and I don’t know how many times I got hit with it. I also got hit with my flashlight. He kept grabbing stuff off of my belt. I even felt the blunt force of my radio on my head at least two or three times. And he had his hand on my gun the entire time.”

Aime did everything he could to keep the suspect from gaining control of his weapon. Unable to call for backup, he kept the assailant pinned against his cruiser. But the repeated blows to his head made it difficult for Aime to maintain his equilibrium.

Williams-Tillman came across the scene just as Aime and the suspect had reached a stalemate. Instinctively, she pulled into the parking lot and rolled down her window, asking, “Do you need help?” Aime said yes, and she quickly dialed 911. After calling for backup, Williams-Tillman turned towards Aime. She said, “I asked Billy, ‘are you going to be okay?’ And we just locked eyes. He never said anything. I saw in his eyes that he couldn’t carry on with his task, and that’s why I got out of my car.”

In what she described as an “out of body experience,” Williams-Tillman walked over to Aime and pried the suspect’s hand from his gun. She said, “I grabbed his hand and jumped on his back, everything happened so quick.” The attacker, franticly trying to break free, clawed at her. She used her body to support Aime, helping him restrain the suspect until reinforcements arrived.

For Aime, the whole experience was a blur. His mind was wholly focused on keeping his weapon in its holster, but he said, “I remember the moment she pulled in. I even remember the direction she pulled in from. Did I expect her to get out of her car? No. But she got out, and the next thing I knew, I felt her hand come across my hand and pry the suspect away from my gun.”

As soon as reinforcements placed the assailant under arrest, Aime lost consciousness. The blows to his head caused a serious concussion. In fact, Williams-Tillman’s physical support was the only thing that kept him from collapsing during the attack. Aime spent several days in the hospital, and it took three weeks of recovery before he was able to return to duty.

Meanwhile, the day after the incident, Williams-Tillman was back at St. Jude school. Her close friend and coworker, Pat Yoches, was amazed when she heard about her colleague’s heroism. Williams-Tillman and she have worked side by side for nearly a decade, and Yoches said, “I was shocked. She’s always helping people at work, but I couldn’t believe she responded the way she did to that attack. It’s just absolutely incredible.”

Aime, too, was astonished by Williams-Tillman’s bravery. He credits both God and her for rescuing him that fateful morning. He said, “There’s no doubt she saved my life.”

Aime, who stands well over six feet tall, said, “First, he hit me with my baton, and I don’t know how many times I got hit with it. I also got hit with my flashlight. He kept grabbing stuff off of my belt. I even felt the blunt force of my radio on my head at least two or three times. And he had his hand on my gun the entire time.”

Williams-Tillman placed her own safety at risk by coming to his aid. But—like the Good Samaritan in the Bible—she selflessly responded to Aime’s dilemma because it was the right thing to do. The Holy Spirit fortified her with courage, and she allowed Him to use her as an instrument for good. She said, “At the time, it was all about Billy. It wasn’t about me.”

Since that first accidental meeting, Aime and WilliamsTillman have formed an incredibly tight bond. She said, “Those few moments together have connected us forever.” They now consider each other family, and if she doesn’t hear from Aime every couple of days, Williams-Tillman checks on him. She said, “I’m always concerned about his safety, and he’s in my heart. He’s like a little brother to me.”

As citizens, we are all responsible for supporting our local law enforcement’s efforts to keep our communities safe. And it’s important for us to remember that a uniform and badge do not make a man indestructible. As WilliamsTillman said, “Police officers are only human.” In truth, they need our consideration and encouragement as badly as we need their protection.

The story of Williams-Tillman’s courage serves as a shining example of Baton Rouge solidarity. Her actions remind us that—no matter who we are—we all play an important role in uniting our city. She said, “You can’t look at people for their color. We’re all brothers and sisters. We all share the same Father. That’s what I taught my children, and it’s what I teach my grandkids.”

For Aime, his relationship with Williams-Tillman represents the spirit of the Body of Christ. She came to his aid not just as an African-American woman assisting a white man, but also as a Christian helping a fellow human being. Likewise, he and his colleagues endeavor to serve justice without partiality. He said, “BRPD doesn’t care what color you are. If you call, we’re coming. If people need us, we’re always going to come.”

No one in Baton Rouge could have predicted how God would use a local grandmother to save the life of a police officer. Aime still can’t wrap his mind around it. He said, “I’ve never been assisted before like I was by Ms. Vickie. It was a total shock. She went above and beyond what any other citizen would have done. It was almost like a family member seeing you on the side of the road and jumping into action.”

Vickie Williams-Tillman and Billy Aime are just two ordinary people God happened to bring together through an incredible circumstance. Their paths likely never would have crossed if he hadn’t been patrolling on Harry Drive or if shehadn’t stopped to check on him. Aime said, “Several other cars passed me that day. I saw them go by while I was pressed up against my unit.”

We often fall prey to distraction, and our busy modern lives make it easy to overlook important details. However, it is vital that we take the time to look up from our devices and set our routines aside. By doing so, we become vessels through which God’s love can flow outward into the community. Williams-Tillman said, “It just takes a minute to help somebody. Don’t worry about what other people think, because that holds you back. As long as I’m doing what I know God wants, I’m completely satisfied.”

Fear, hesitation, and self-interest keep many of us from doing the right thing. What makes Williams-Tillman so remarkable is her willingness to serve the Body of Christ no matter the cost. Consider how many times a day the Lord opens doors for you to help your neighbor, and reflect on how often you seize those opportunities.

Human beings—regardless of their age, race or situation—have great potential to effect positive change. All it takes is a little compassion for our fellow man and a great deal of willingness to act when we see a need. WilliamsTillman said, “I wouldn’t advise somebody to do something like I did, but when God says move, you move.”