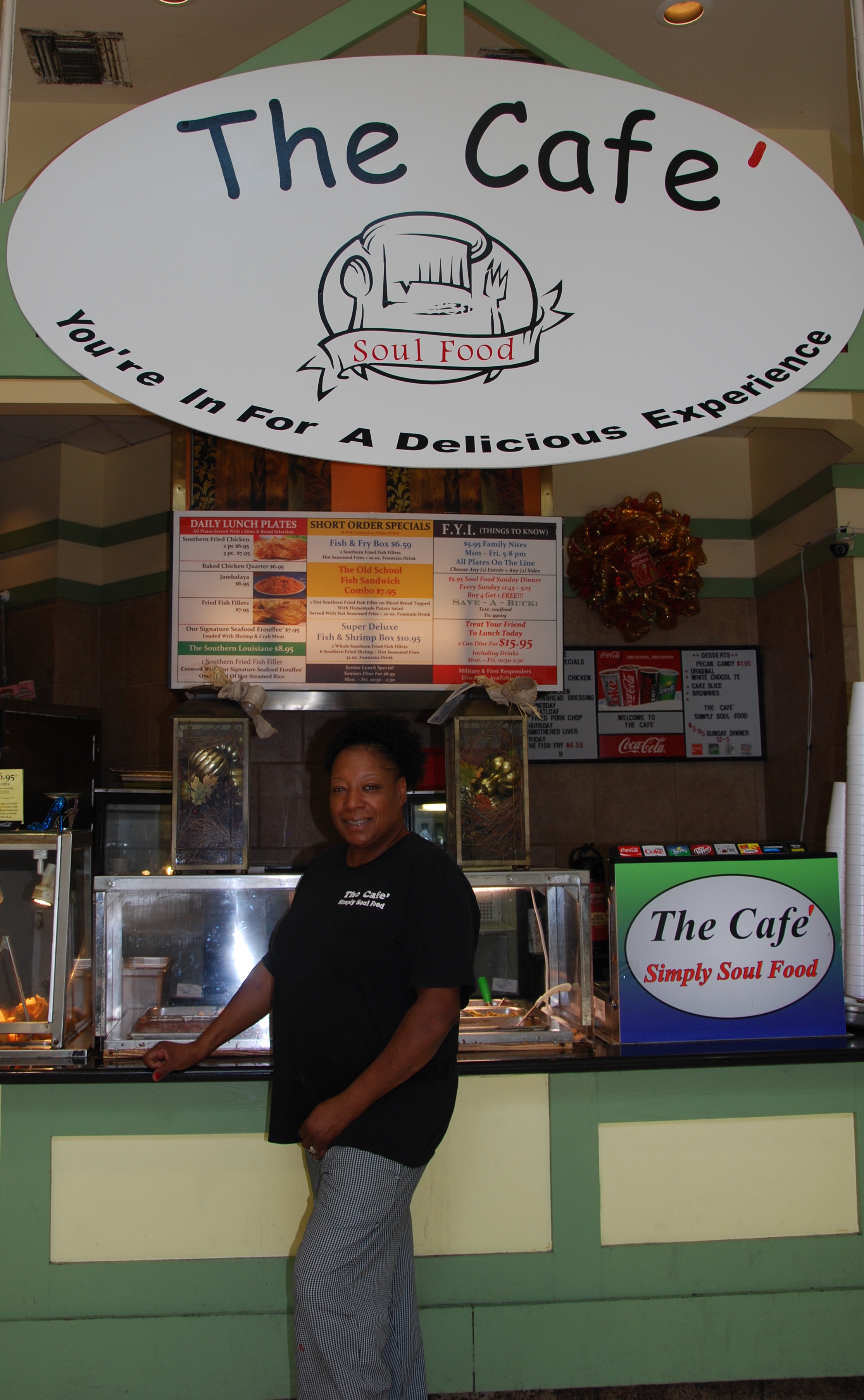 On Sunday mornings, starting at about 7 a.m., Angie Stewart-Chapman is cooking up a storm at her Cortana Mall restaurant, hoping to greet a large lunch crowd on their way home after church services. “My prayer is that after they receive spiritual nourishment at their places of worship, they will come here for physical nourishment and break bread with their families and friends.”

To that end, she offers a Soul Food Sunday Dinner special every week at her business, called simply The Café. The small restaurant is a lifelong dream come true and she credits God for making it happen. “God gave me favor,” she said.

The Café serves the kind of old-fashioned home cooking that Stewart-Chapman cooked for her family when she was growing up. “I remember being 5 years old and baking biscuits with my mother in the kitchen early in the morning,” she said. As a young girl, her cooking abilities grew to include southern fried chicken, jambalaya, red beans and rice, fried fish, cabbage, rice and gravy, smothered pork chops, mustard greens and more. By the time she was a teenager, she could cook just about anything.

Cooking with her mother is a happy memory, but it didn’t last forever. During her teenage years, her mother left the family and Stewart-Chapman found herself caring for her two younger siblings and her grandfather. She worked two jobs to help support them, while still in high school — delivering pizzas in the evenings and stocking shelves in the middle of the night at a grocery store. Somehow, she graduated from high school and even went to college for a short time. But in a life filled with ups and down, there was more struggle to come.

By the age of 31, she was a single mother with two toddlers, living in a homeless shelter, and dependent upon food stamps for her survival. But she knew it would be temporary. The staff at the shelter led group sessions in which the residents talked about their hopes and dreams, and Stewart’s honesty was met with sarcastic remarks. “When I told them I wanted to have my own restaurant or catering business someday, the other women laughed and mocked me. ‘Oh really? How’re you gonna do that? Where are you

gonna get the money?’ But I was willing to work hard and I knew in my heart that things would get better.”

One day, she decided to stop accepting the food stamps. “I thought to myself, ‘I’m living a good life. The Bible says that God will provide ‘seed to the sower and increase his harvest’ so I’m going to put my faith in that. The Bible also says ‘I have been young and now am old, yet I have never seen the righteous forsaken or His children begging bread.’ If I was accepting food stamps, I was begging bread and I didn’t want to do that anymore. I prayed on these scriptures and I believed in them.”

Not long after, she was able to rent a stall at the flea market on Florida Boulevard and began selling plate lunches three days a week. It wasn’t the restaurant she dreamed of … but it was a start.

By 2013, she was able to open The Café in the Cortana food court. She serves daily lunch and dinner, and with the help of her 7 employees, delivers additional lunches to employees at the local chemical plants. She also caters special events for the National Guard, the Army Reserve and local businesses. (She also operates a second store, Decadent Creations, next door to The Café.)

Stewart-Chapman’s cooking skills provided her with not just a livelihood, but with a ministry as well. On delivery runs, she always takes a few extra plates and hands them out to the homeless or anyone who looks like they might appreciate a good meal. At The Café, she enjoys connecting and visiting with her customers. More than once, she’s been told that she has a “glow.” “That’s my open door,” she said, “to share my faith.”

“God has truly blessed me,” she said. “And one of the things I make sure to do is tithe. Ten percent of everything goes to my church so I can do my part to thank God and to help other people.”

Though her children are grown now and she is remarried, Stewart-Chapman is still juggling work with parenting. For the last four years, she has fostered a young boy whose mother is struggling with drugs and other personal problems. During our interview, it’s her sister Saundra Stewart who shares this information.

“She won’t tell you about that,” said Saundra, “but I think people should know just how much she cares about other people … how hard she works to take care of everyone around her. I don’t know what would have happened to our family if it hadn’t been for Angie working so hard to keep us all together.” (The siblings have since reunited with their mother.)

Stewart-Chapman practices her faith at Full Gospel United Pentecostal Church, and has advice for Christians who occasionally struggle with their beliefs. “I pray,” she said. “Every morning when I come in to cook, I start with a prayer. And throughout the day, I look at other people to remind myself of all the blessings I have. And I don’t complain … because I know that my life is full.”

“When I told them I wanted to have my own restaurant or catering business someday, the other women laughed and mocked me. ‘Oh really? How’re you gonna do that? Where are you gonna get the money?’ But I was willing to work hard and I knew in my heart that things would get better.”