Donna Britt says challenges remind us what is important in life.

Standing at the edge of a Georgia peanut field, Donna Britt watched her father preach to hardworking harvesters. They couldn’t spare a day off for church, so he brought the gospel to the field. It was a legacy of compassion and perseverance – an understanding that stepping into someone else’s story makes a difference

That foundation has endeared her to the Baton Rouge viewing community as she serves her 36th year as anchor for WAFB Channel 9 News. “I feel like God led me to be in television,” she explains. Her own story of resilience demonstrates a commitment to make the most of God-given gifts in the face of both personal success and loss.

Her current challenge is a continuing battle with a progressive disease recently diagnosed as ALS, amyotrophic lateral sclerosis, better known as Lou Gehrig’s disease. The condition causes her immune system to attack her nerves, resulting in partial paralysis that affects her ability to walk, use her hands and breathe. But her incisive mind and the twinkle in her eye testify to her ability to face a tough truth head-on with a deep sense of peace built on faith.

“I think that your struggles are a bridge,” she said. “There are so many people that already have their own struggles, and because I know how aggressive this illness is, I cannot hide it. And rather than say that a thousand times, I just go on Facebook and explain to everyone what’s happening. And I find that it’s so rich, the support and the love that I get that way.”

Kindness, she said, is not something you do, it is something that comes from who you are – from your character. “What you do in kindness celebrates your power to use the abilities that God has given you, and you want to feel worthy of them.”

The legacy continues in countless news stories and acts of kindness, including volunteer work with the Salvation Army, Girl Scouts, and Baton Rouge Ballet Theatre, and hundreds of hours spent restoring a library at Progress Elementary. “Reading comprehension scores on standardized tests after three years of really revving the library made a difference,” she said. “When you help others, you can feel like you have been able to affect something bad in the world and make it good.”

“That was just our family’s tradition – to always take care of everything,” she recalls. “We all kind of try to follow Jesus’ example, but my dad was a big disciple. When I was young, about 5, he would let me climb up on a toolbox on the front seat of the pickup truck when he was going to work on

somebody’s house. His idea was that you build arelationship with someone when you’re helping them.”

“I was born again at age 6 and was in the church every time the door was open,” she said. She played the piano and organ for hundreds of funerals and weddings.

While serving at a Southern Baptist church in Florida, Donna’s mother gave birth to her fifth child. The baby survived, but Donna’s mother died in childbirth. At the age of 9, Donna and her siblings were sent to live with their grandmother. When her father remarried, they moved to Biloxi where he became a teacher. The family spent weekends helping breathe life back into dwindling churches in small Mississippi towns. Her father preached, her stepmother led the music and Donna played the piano. “We had seven kids so sometimes we were double the congregation,” Britt said.

Two of her brothers followed her father into the ministry, while Donna pursued her love of music at the University of Southern Mississippi. She later transferred to LSU to complete her degree in music education, and she became flag choreographer for the Tiger Band. She worked at WLBI in Denham Springs to make ends meet, and later at WYNK, where she met her future husband, Mark Ballard, Capitol News Bureau Editor for The Advocate. They celebrated their 36th wedding anniversary in August.

“The summer we got married, two of my three sisters also got married. Our dad exclaimed, ‘A thousand dollars to anyone who will elope!’ Mark and I never got the money, but we had a casual wedding under a tree behind the Greek amphitheater on LSU’s campus.” They sliced a watermelon instead of a wedding cake. 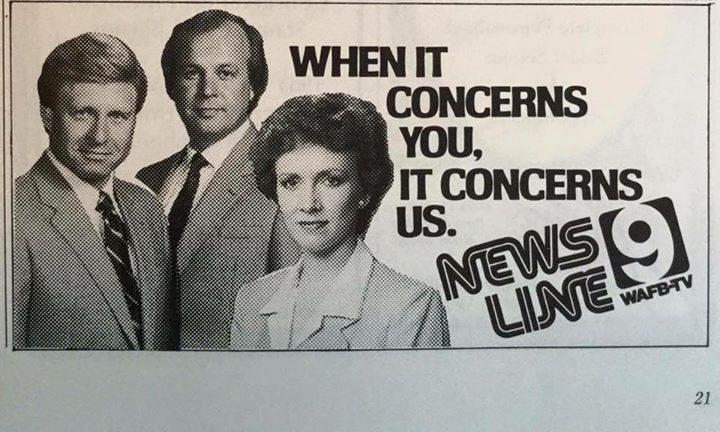 “…When I was young, about 5, he [my father] would let me climb up on a toolbox on the front seat of the pickup truck when he was going to work on somebody’s house. His idea was that you build a relationship with someone when you’re helping them.” -Donna Britt

In May, their daughter Annie – a DNA researcher in Rhode Island – married Alec Yonika under the same tree. They celebrated with a crawfish boil, a new experience for their in-laws. “Mark literally picks me up and he’s sort of my cheerleader, too,” she said. “When you have to struggle every move you make, and you run into trouble, you go, ‘Oh God, are you going to help me with this one?’ It’s kind of like the prayer doesn’t stop. It’s a continual thing.”

“I ask that you don’t pray for me to be totally healed,” she said. “I think my paralysis is permanent. What I would like is for you to pray that I am comforted and that my family is comforted and that we greet this thing as a blessing, which we try to do. Because there’s nothing like this to help you prioritize your life, and I think that’s healthy.”

Donna says First United Methodist Church has really surrounded her in love. “Food delivered to your door and cards in the mail, all of that,” she said. “It’s just wonderful.” Her own spiritual struggle led her to the church she now calls home. “I basically went to college in Hattiesburg, Mississippi in the late ‘70s, and I ran into churches that didn’t want blacks. People in the music department that were my dearest friends couldn’t go to those churches, and so I just sort of withdrew from church. And it wasn’t until we had our first child that I realized what a moral community I had grown up in. So, I went spiritually shopping.” 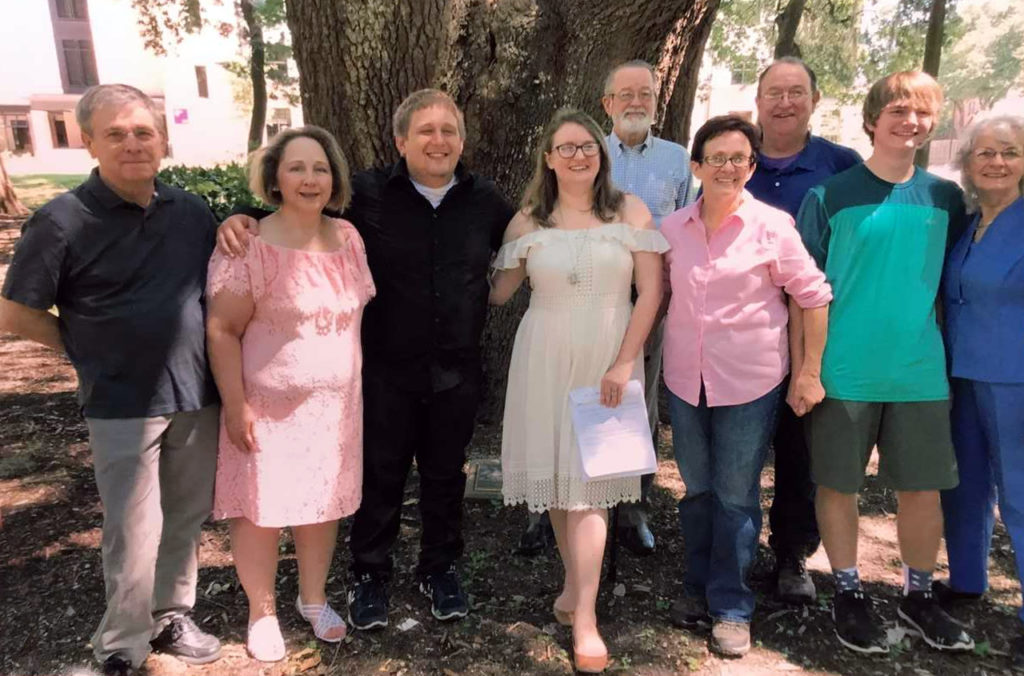 “I just wish that churches would teach children not to see color, because children grow up in homes where their parents are racists, and they turn into racists, too. I keep thinking that racism will die out, but I see young children today that have grown up in that kind of family and feel afraid of someone who’s not like them,” she said. “Jesus would go in the middle of it.” Donna and her family found both inclusiveness and in-depth preaching at First Methodist. “Our doors are always open, and they do mean that,” she said.

Her door remains open, as well. She would like to pass along the volume of information she has gained through her experience with ALS, including the discovery of an LSU voice bank that allows her to record a thousand phrases in her own voice for future use.

“I’ve had an excellent life and been very blessed,” she said. “I couldn’t want for more.”

“This past May, our daughter Annie and her beau Alec Yonika stood under the very same tree to get married. it was a very beautiful simple ceremony just like the one 36 years ago. My heart sang because of the setting and the love i know they share. instead of my father officiating, Judge Curtis Calloway kindly did the honors. We had a crawfish boil at our home afterwards and showed the new in-laws how to peel a crawfish!” –Donna Britt