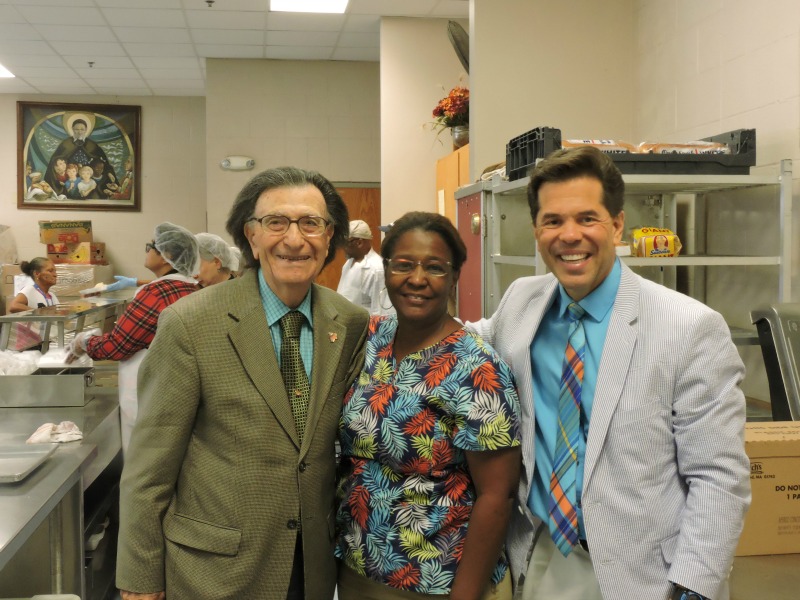 When it comes to teaching children about sharing God’s love, do actions really speak louder than words? At 94 years old, Rosie Martina is proof that they do.

As a young boy growing up in Baton Rouge during the late 1920s and 1930s, Martina lived in an area off Highland Road that was often called the country. Today, most of this land is dotted with subdivisions and tree-lined driveways, but back then, it was mostly farmland.

“We lived in an old house. We were poor,” and Martina. “But we were rich in other ways.” Martina’s family always had plenty to eat, he said, and he watched as his parents shared their food with anyone who was hungry. Many times, that included strangers. Transients going from California to Florida to pick fruit would leave their trains and walk through the area searching for homes marked with a sign indicating the owners would provide food to anyone in need. “Sometimes we made cracklins’ during the wintertime and we would tell them to grab a paper bag and take all they wanted, or we would have cooked sweet potatoes. Now, that would bring people. You could always smell a cooked sweet potato a mile away,” he said. “My parents always gave what we had. We had homemade Italian bread, cheeses and figs. We would make sandwiches and wrap it up for them, put it in a knapsack,   give them a Mason jar of water, and they would go on their way.”

Watching his parents offer food to hungry strangers profoundly impacted Martina. “I knew I wanted to do better by my parents,” he said. And by all accounts, he has. Martina recently joined other community volunteers and leaders to celebrate the 35th anniversary of the St. Vincent de Paul Dining Room. The group included Michael Acaldo, president and CEO of St. Vincent de Paul Charities, and Bishop Robert W. Muench of the Diocese of Baton Rouge.

For Martina, the Dining Room has always been a special place. That’s because he was there when it first opened, and he has remained a driving force in feeding the hungry in Baton Rouge ever since. It was Martina — along with others, including his recently deceased wife, Laura, Vernon Broussard, Marvin Ourso, Alec Bourgeois, Bill LeBlanc, Claude Doucet, and Jewel Newman — who joined together to stop hunger in the capital city. Their efforts began in 1982 with the opening of the first dining hall for St. Vincent de Paul. They used a donated vacant house on 21st Street. The home wasn’t even air-conditioned, and volunteers could only serve 10 people at a time. But as each guest finished, another would come. Every day, about 20 to 50 people would show up for a hot meal. The menu was based on whatever food items were donated each day. Many residents had vegetable gardens and fruit trees and would donate surplus crops by dropping them off on the back porch of the house. Some local food businesses also helped.

But eventually, the need grew for a bigger dining room, and through the years, due to the generosity of others, including local contractor Fred Griggs, the St. Vincent de Paul Dining Room expanded to its present location on what used to be 23rd Street, now aptly named St. Vincent de Paul Drive.

Through every stage of the Dining Room’s growth, and even today, Martina has remained a constant volunteer. With a humble attitude, he is quick to praise others for the success of the project and prefers to focus on his main job of procuring food from local businesses and making food pickups.

“Rosie is a great volunteer for us. He also helps coordinate other drivers in picking up food donations,” Acaldo said, adding that “Rosie’s Army,” an unofficial name given to these volunteers, is essential to the Dining Room, which last year served more than 246,000 meals.

One volunteer in “Rosie’s Army” is Martina’s daughter. Just as her father learned to live out his faith by watching his parents, Martina’s daughter has been quick to absorb the value of helping others. Now retired, she drives her father around town as he completes his volunteer duties. Together they are not only living out family values that began almost a century ago, but they are also living out their faith.

“God said, ‘Feed my people,’ and that’s what we’re doing,” said Martina, who says volunteering and serving others is key to finding purpose and passion in living. He encourages others to get involved. “See that television,” he said. “Forget about it. Get out of the house. Life is short.”

If you are interested in joining “Rosie’s Army” or would like to volunteer with St. Vincent de Paul, visit svdpbr.org.

1 thought on “A Life of Service”