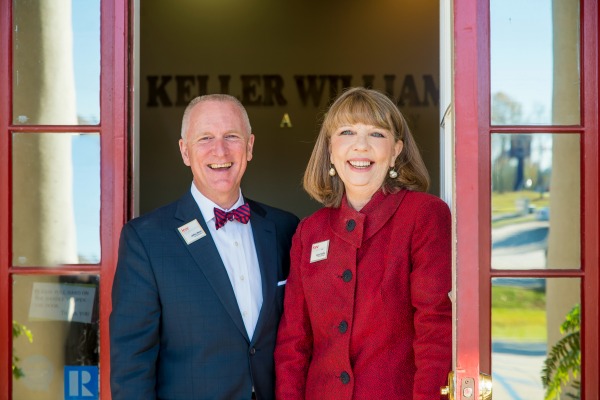 Faith can be a Key to Success

It’s funny how you can look at something for weeks, months, even years … and not really see it. Jeffrey Welsh experienced this years ago when he was trying to decide which direction his life and career would take. Speaking with a pastor about his search for a meaningful ministry, the pastor pointed out that Jeffrey had already found it. In fact, it was right there in plain sight if he only cared to look. But we’ll get to that later.

Jeffrey and his partner Carol Poche are leaders of The Keyfinders Team at Keller Williams Realty. They might spend their workdays in the real estate world, but their careers are founded on a commitment to serving God. They believe their shared faith is what brought them together professionally.

Carol joined Keller Williams Realty in 2002 after 16 years operating Mamacita’s Restaurant with her husband. A year later, Welsh brought his property management company to KW and began to focus on the sales side of real estate. He and Carol became friends right away and their friendship deepened when they worked closely together after Hurricane Katrina, helping a wave of New Orleanians find homes in Baton Rouge.

Not many people know it, but Keller Williams Realty International, founded in 1990, is based on Christian principles. The company’s belief system is God, Family, Business – building careers worth having, lives worth living, businesses worth owning, and legacies worth leaving.

It’s this kind of philosophy that helps people see a company or business in a new light. The real estate field wouldn’t seem to have any Biblical connection, but Jeffrey disagrees. “I’d say that the

first real estate transaction was when God gave Adam and Eve the Garden of Eden and told them to tend to it.”

In any case, Jeffrey and Carol formed The Keyfinders Team in 2006 with the support and encouragement of their spouses Pam Welsh and Gerry Poche. Since then, the two have become top producers in their market, averaging 100 transactions per year. Best of all, their team has become a family affair with 10 employees, many of them spouses, grown children and in-laws.

Quite simply, they have formed a “marketplace ministry.” The term describes a belief that one’s work IS one’s ministry, that every profession provides opportunities to practice evangelism, help others, and spread the Gospel. Although Jeffrey has long been familiar with the term, it took a pastor friend’s insight to really make it come alive.

Although he was practicing his faith and finding success in his work, Jeffrey wanted to do something more meaningful with his life. “I began feeling called to the ministry,” he said. “And one day, I was having lunch with Pastor Larry Norman asking for his guidance. When we got back to my office, he looked at my sign and said, ‘Jeffrey, this business is your ministry. The proof is right here.’”

Before coming to Baton Rouge, Jeffrey had worked with his mother at the property management company she founded in the 1980s. She had also designed the company logo which featured a red key. When Jeffrey looked closely at the key, he could clearly see the shape of a white cross in the design.

“All those years, I had never seen that cross,” he said. “I took it as a sign, and I started to seek God on a different level. I was fired up.”

Carol and Jeffrey look for opportunities to connect with their clients on a deeper (spiritual) level. “In this business, you often find yourself sitting at people’s kitchen tables talking about the changes in their lives or the losses they’ve suffered,” said Jeffrey. “It gives us the chance to minister to them, to be peaceful and patient as they share their feelings, and to offer them our friendship.”

Carol agrees. “It’s such an honor to play a role in bringing a young family to a new home where they will welcome their firstborn, celebrate holidays, and live life to the fullest,” she said. “It’s a gift to us, and one that we treasure. Every sale is so much more than that. It’s a family we are serving and a life we are enriching.”