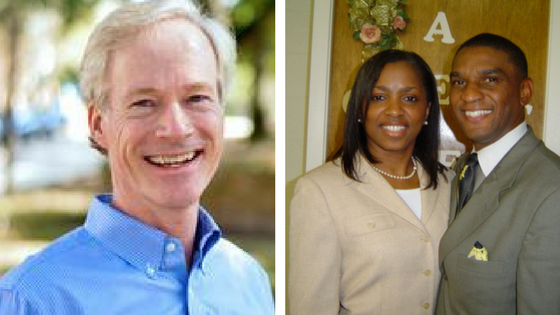 Two years ago, the city of Baton Rouge simmered with racial tension after Alton Sterling, a black man, was shot and killed by two white police officers. The shooting made national headlines and set off weeks of unrest. Barely a week later, Gavin Eugene Long ambushed and shot six police officers, killing three.

In this climate of fear and violence, pastors throughout the city were comforting their congregations and urging people to stand united rather than divided. But the hurt and anger flowed along racial lines, and finding common ground was easier said than done.

Pastors Gerrit Dawson and Albert White, already longtime friends, took a leap of faith and decided that racial healing had to start somewhere and it might as well start with them.

Dawson is the senior pastor at the mostly white First Presbyterian Church in downtown Baton Rouge. White is pastor at Abounding Love Ministries, a mostly black congregation in the northern part of the city. Their friendship had led them to partner with each other for vacation Bible schools, Habitat for Humanity projects, and Bible studies. But the two congregations had never really mixed with each other on a personal or social level. And that seemed like a logical next step.

Their first step was to identify congregants who were willing to participate. Then “matches” were made among black and white families, who took turns visiting each other’s homes, sharing meals, and getting to know one another. Those first meetings had their awkward moments, but many friendships have been formed and the feedback from both sides has been positive and encouraging.

“In the beginning, some people worried that they would be uncomfortable in someone else’s home or that they wouldn’t know what to talk about,” said Pastor Gerrit, “but in fact, once they engaged with each other, it was easy … because after all, both had Christ in common.”

They called their campaign 50 on 50 because they hoped to enlist 50 families from each church, but because of the smaller size of Abounding Love Ministries, 20 was a reasonable compromise. Looking back, says Pastor Albert, the project almost didn’t happen.

“For the announcement (and very first night) of the program, we invited the First Presbyterian group to our service at Abounding Love,” he said. “But that was the night the city started flooding so we had to cancel. Then our church flooded, and of course, the people at First Presbyterian came and helped us over the next few weeks. So we ended up developing relationships even before the program started.”

“My wife Adraine gave a sermon there,” Pastor Albert said. “It was the very first time an African-American woman had done so in that church. And I gave communion to the congregation along with their elders. That was another first.”

The home visits have expanded to include field trips, outings, and serious discussions. “We all got together and went to Donaldsonville to visit the River Road African-American Museum,” said Pastor Gerrit. “It was an amazing experience, and afterward, we went out to eat and had a heart-to-heart discussion about slavery and its impact on all of us, black and white, even today.”

“That trip was something that many of our white friends would never have done on their own,” said Pastor Albert. “But it was truly special to share an experience like that together.”

Today, the affection between the two pastors has flowed to their congregants, who have learned how to look beyond the color of each other’s skin and really see the person inside. Now, among the two churches, new friends ask about each other’s families, their health, their needs.

“We are all valuable,” said Pastor Albert. “We all have something to offer … and we are all so much alike. We just need to encourage each other to step outside of our comfort zones whenever we can.”