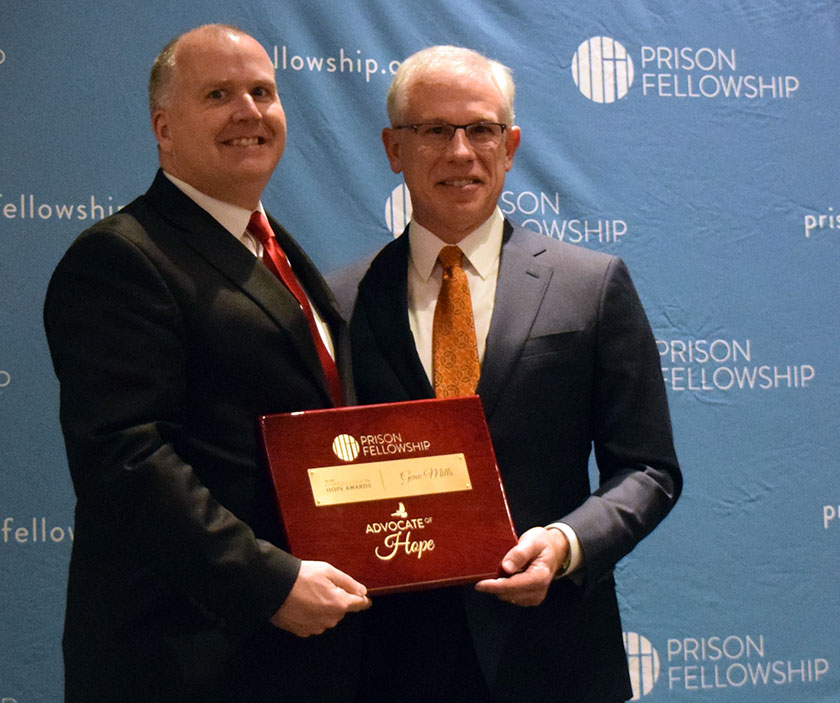 Gene Mills: An ‘Advocate of Hope’

His modesty prevents him from taking credit, but Gene Mills was recently awarded the 2017 Advocate of Hope Award for his part in Louisiana’s recent criminal justice reform package. As president of Louisiana Family Forum, Mills was instrumental in bringing together several groups to help change the system, including victims of crime, correctional officers, lawmakers and faith leaders.

“All I did was call attention to the good work that was already taking place,” Mills said.

In fact, the state Legislature created a task force in 2015 to come up with recommendations to reduce the prison population which is well over 40,000. For years, Louisiana has held the unfortunate reputation as the state with the highest incarceration rate in the country. Many of the issues that created the problem have been addressed in the 10-bill package that Governor John Bel Edward signed last June.

The new law aims to offer alternatives to prison time for non-violent offenders, expand parole eligibility, reduce prison terms, and provide support for inmates transitioning into society, among other initiatives. The reforms are expected to cut the state’s prison population by 10 percent over the next 10 years.

Mills’ award was presented by Prison Fellowship in January at the Charles Colson Hope Awards ceremony. In a press release, Prison Fellowship noted that the reforms would not have been possible without Mills’ leadership, integrity and passion, or without the Christian worldview expressed by the Louisiana Family Forum team.

“We are proud to have the partnership and friendship of Gene Mills,” said Craig DeRoche, Senior VP of Advocacy and Public Policy at Prison Fellowship. “He exhibits a passion for biblical principles of justice that is rare and valuable.”

Majority Whip Steve Scalise agrees. “Gene has committed his life to ministering and helping improve the lives of others,” Scalise said after the award was announced. “His deep faith and selfless dedication are inspiring, and I am proud to call him a friend.”

Mills said the reason for his involvement is simple. “Scripture tells us to tend to the needs of the less fortunate,” he said. “Grace has been extended to each of us. Now, within the criminal justice system, we must intentionally extend that same grace to prisoners … it is extraordinary how many inmates are able to turn their lives around.”

About the Advocate of Hope Award
The Charles Colson Hope Awards recognize people who have faithfully and courageously worked to restore those affected by crime and incarceration. Colson, who founded Prison Fellowship 40 years ago, was a passionate advocate for incarcerated men and women, and their families, sharing his faith in the Gospel and honoring the God-given value and potential of each person. His impact on prison ministry, prison culture, and prison reform has been broad and lasting.