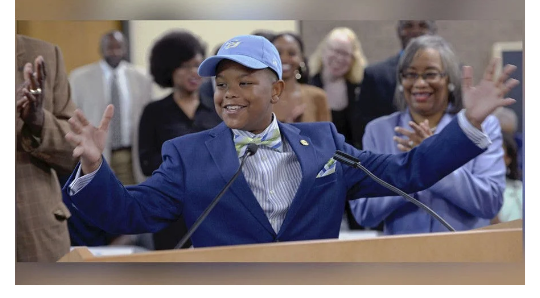 A Beautiful Mind
by Lisa Tramontana

Elijah Precciely was literally the answer to a prayer — his father’s.

Steve Precciely was the last male in his family’s line, and after two daughters, he and his wife Pamela desperately wanted a son. They would have to wait 11 years. “At one point, I felt God say to me, ‘What is more important? My desire for you to do my will or your desire to have a son?’ I realized that I needed to be happy doing God’s will … that the situation was beyond my control … so I accepted that it might never happen, and I felt a burden lifted.”

And not long afterward, the Preccielys learned they were expecting. Elijah came into the world weighing 9 pounds, 6 ounces — a big baby destined for big things. “When he was born,” said Steve, “I heard God say, ‘Name him Elijah, for he will be a prophet to the nations.’”

At 11, Elijah is already a published author, host of a Christian radio show, and owner of five patents for several inventions. This month, he will become a licensed minister of The Church of God in Christ, and next spring, he will be a full-time student at Southern University, where just last month, he was offered a full scholarship to study physics and mechanical engineering.

Elijah is a true child prodigy and his parents say they are humbled by God’s grace. “We really believe he’s going to change the world,” said Pamela. “And we want to facilitate what God is doing in his life. We give the glory to God and we let the Holy Spirit lead us.”

The Preccielys’ faith is strong. Steve is pastor of Grace and Truth Church in Baton Rouge, while Pamela has served in many ministries throughout their marriage. They home-schooled all of their children and raised them in a godly household. At just 5 years old, Elijah was so comfortable talking about Scripture that he stepped up to the altar and preached his first “message.”

But his parents knew he was gifted long before that. At just 18 months, his daycare teacher told the Preccielys that he should probably be moved up with the 2- and 3-year-old children. This became a pattern. By age 3, Elijah’s parents were amazed by how quickly he soaked up information. “We had posters on the walls, lists of all the things he had learned,” said Pamela. “The planets, the presidents, the continents, all of the times tables. We couldn’t hold him back.”

Television and video games were limited, while books and musical instruments were encouraged. Elijah has played piano, guitar, the recorder, the violin and the drums. “I want to be a jack-of-all-trades,” he said, and a master of all!”

By age 6, he was flipping through college level textbooks, and by 7, he was learning about science and law, and was elected president of his class at Camp CEES. Through a program called TeenPact, he increased his knowledge of government and civics, and was elected governor among his peers. His parents took a Hebrew class and brought their son with them. Elijah learned Hebrew right alongside them. By age 8, Pamela says she had to find help and looked to nearby Southern University, where a professor suggested he enroll in classes right away.

“At that time, Elijah was doing experiments, every day using things from around the house,” Pamela said. “I was always looking for something that had disappeared from my kitchen.”

“I would ask my mom, ‘can we get some liquid nitrogen, some dry ice and some north and south magnets? Please?’” Elijah said. “I just had so many ideas and I didn’t want this information to just sit on a shelf in my brain! When I get thoughts and ideas in my mind, it’s … pop, pop, pop … like popcorn!”

The classes at Southern University opened up a new world for Elijah. For the past three years, he has taken one or two classes every semester, mostly math, science and engineering. One of his parents attends every class with him, and they say he is certainly not shy about discussing the material with his instructors. If anything, they have to remind him to let the other students engage in discussions as well. “His hand is always up,” says Steve.

As for faith, Elijah says he loves praying and speaking to God. “Someday, I want to use my academic knowledge and show how it’s tied to the stories and lessons in the Bible,” he said. “I want to explain that the Bible is the truth. If there is ever an opportunity to minister to someone, that’s what I’m going to do.”

He prays and talks with his parents to get ideas for his radio show. “Sometimes, I’m filled to overflowing with the Holy Spirit,” he said, “and I speak in tongues. The Holy Spirit speaks through me and gives me solutions to problems, and shows me how things happening in the world can be used in my radio show. It’s not just a brainstorm. It’s a God-storm!”

Dressed smartly in a coat and tie, Elijah is all smiles as he shakes my hand when we meet. He is articulate and funny, modest and well-mannered. When we mention video games, he talks about their adverse effect on gray matter in the brain. When we mention a Bible verse about fear, he segues into a discussion on the chambers of the heart. When he talks about his love of cooking, he ends up explaining the difference between saturated and trans fats. It’s easy to forget that this little boy with so much encyclopedic knowledge is just 11 years old.

“As you can see, we have our own in-house scientist, doctor, dietitian …,” said Pamela. “You know that phrase — like a kid in a candy store?’ Well, Elijah is like that in a science lab or a library. He looks around and is so excited by the opportunity to learn new things.”

Steve and Pamela are clearly outstanding parents, and it’s easy to see the closeness they share with their son. Seated between them, Elijah smiles as they tell stories about him and occasionally reaches over to rub their arms or hold their hands.

“The key for us as parents was to pray every day,” said Steve. “And we got him into the Word of God early on. His faith in Christ is his foundation.”

“And you two,” says Elijah, looking at his mom and dad. “I couldn’t be who I am without my parents. They are my foundation, too.”

Elijah is often asked to speak at academic, community and religious gatherings. If your group would like to schedule an appearance, contact Brianna Craig at (225) 733-9245.