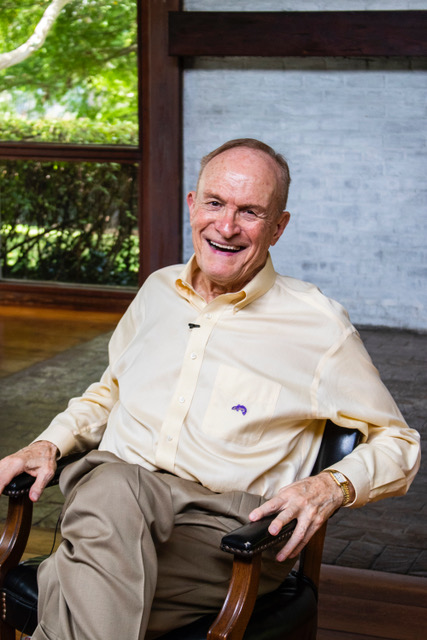 memories of family and faith 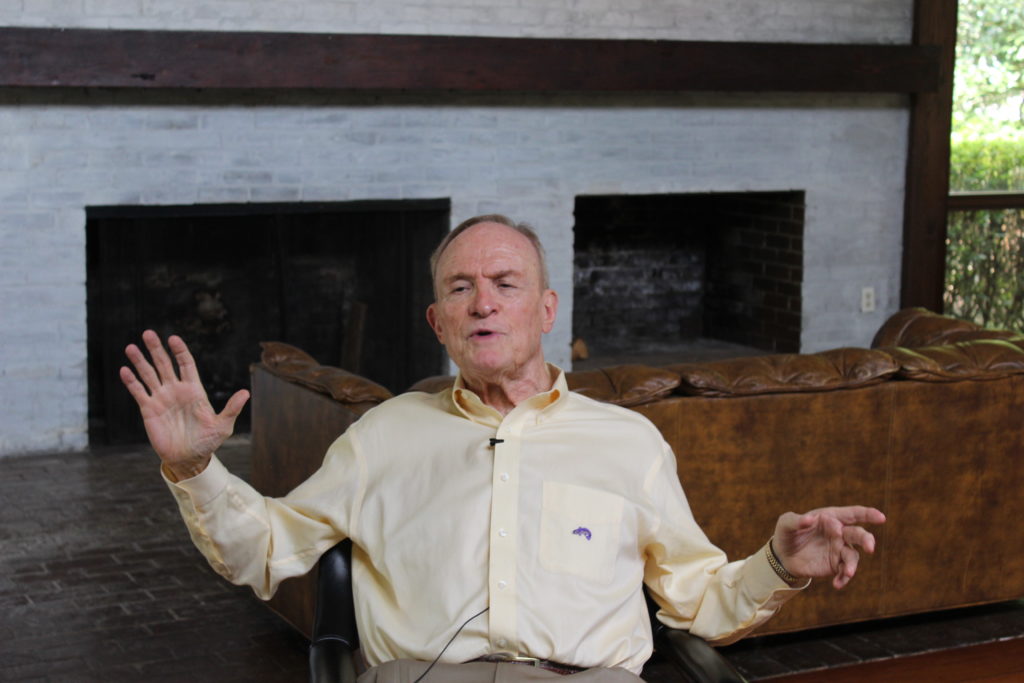 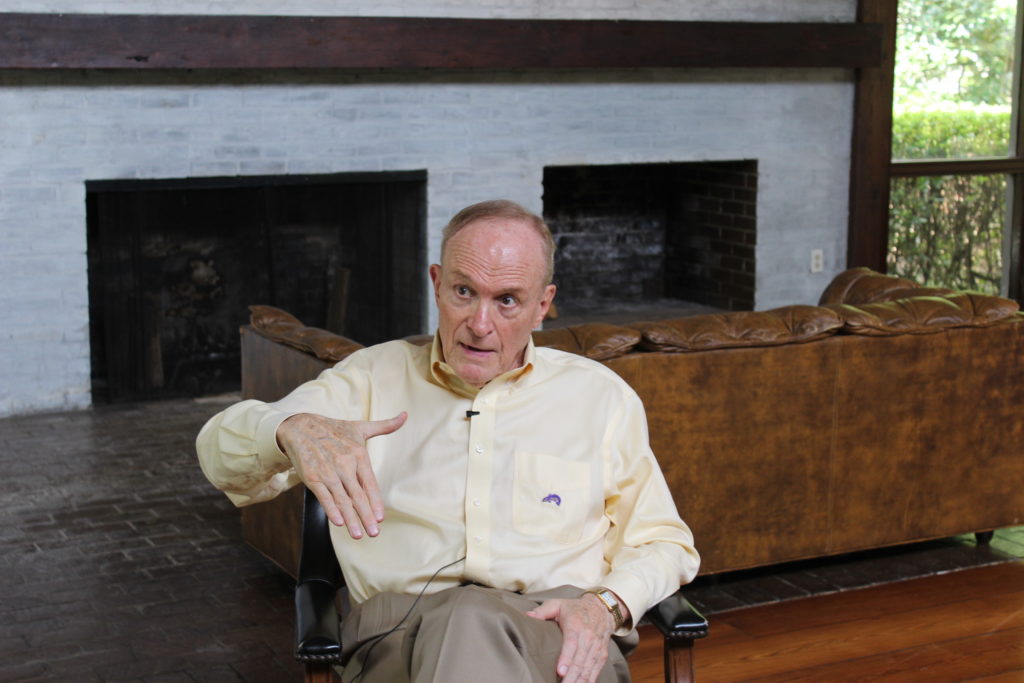 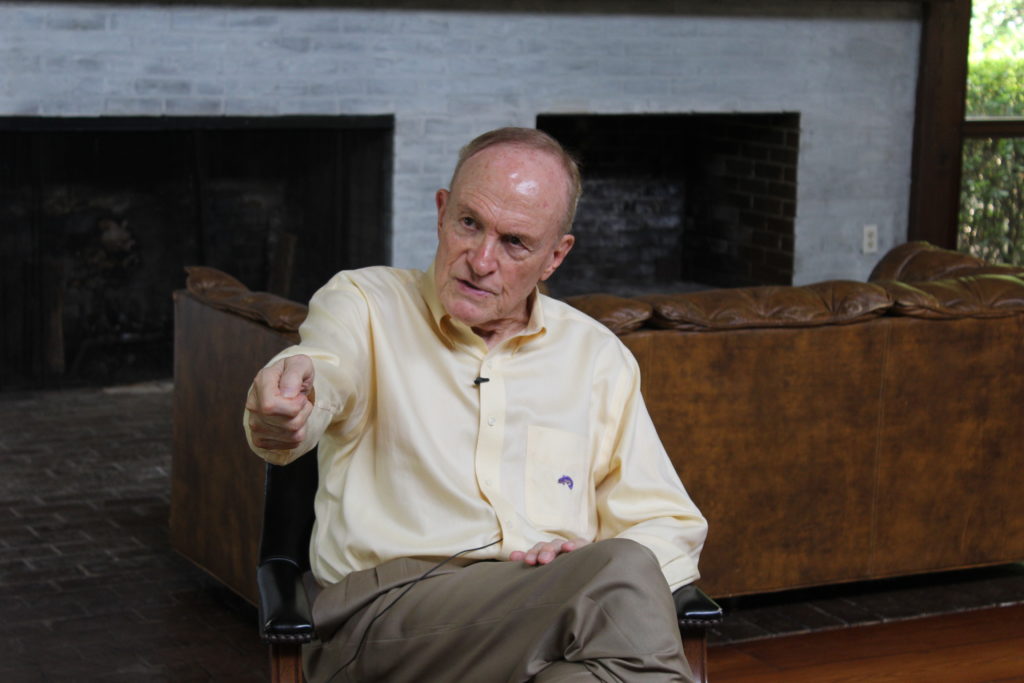 Two days before I was born, my so-called father—I’ve always referred to him as “my mother’s husband”—left my mother, two young sisters, eleven and twelve years of age, and me, and he never returned. His departure put my mother in a difficult position. She had an eighth-grade education, came off the farm in North Dakota, and couldn’t get a job during the Great Depression in 1935. She became a maid and baby-sitter to earn money, and she had to put our family on welfare.  We lived in a one-room apartment above a bar and hardware store, and I remember my mother getting $42.50 monthly from Ward County welfare.

Two times during this difficult period, my mother taught me a lesson that has stayed with me during my entire life. I saw my mother put on her winter coat, walk down a flight of stairs, and take back to the Red Owl and the Piggly Wiggly grocery stores 25 cents and 40 cents, because the clerks had given her too much change for the groceries she’d brought home. Her actions remind me of a poem by Edgar Guest.

I’d rather see a lesson than hear one any day
I’d rather you walk with me than to merely show the way
The eye is a better teacher, and more willing than the ear
And counsel is confusing but example’s always clear
The best of all the teachers are the ones who live the creed
To see good put into action is what everybody needs
I soon can learn to do it if you let me see it done
I can see your hand in action, but your tongue too fast may run
And the counsel you are giving may be very fine and true

But I’d rather get my lessons by observing what you do.

My mother always followed the advice of St. Francis of Assisi when he said, “Preach the gospel every day, and if necessary use words.” I saw other lessons in the life of my wonderful mother. Not once, after being abandoned, did I hear my mother talk negatively about the man who had walked out on us and never returned, never sent any money, never wrote. She never, drank, smoked, or used profanity. She was never bitter, angry, or ever complained about her situation in life. I learned from her that if you are looking for a helping hand, look at the end of your own arm.

My mother’s faith was unbelievable.  She brought me to Mass and Communion daily — not just Sunday, but daily. For me, the daily trip to church was a ritual. To my numerous fake illnesses and attempts to avoid going, my mom’s response was always, “Get up, Son. We’re going to Mass and Communion.” I never slept in a bed the first 21 years of my life but the spirit that grew in that little one-room apartment we lived in, uncomfortable and cramped though it was, made it attractive and peaceful. I was blessed.

Being a small place, the apartment never provided any place for me to get away on my own. So at night, I often went to sit above the alley on the fire escape. One night, the faith my mother instilled in me deepened when I came back in from sitting out there. My mom asked me to sit in her little rocker.

She pulled up the footstool and said, “Son, I notice you go outside at night a lot. What do you think about when you’re out there? I said, “Mama, I think of two things. I think of travel.” (We didn’t own a car, a bicycle, or any other form of transportation.) “I think of climbing mountains.” (North Dakota is a very flat state, flatter than the top of a table.) That dream came true — I have been in 90 countries and climbed the Matterhorn.

My mother hesitated just a moment and then said, “You know Son, I’m embarrassed to tell you this, but I need to teach you a lesson. You know when these people come to pick me up to go baby-sit? I’m so embarrassed. There’s no husband in our house. We live in this little one-room apartment. I’ve just got an eighth-grade education. My clothes smell of mothballs.” (She bought her clothes at rummage sales.)

“So I’m so worried about my image when these big shots come to pick me up. I look up big words in the dictionary, and then all the way to their house, I inject these words into conversation to try to impress them. That’s called making an image. When you sit out there on the fire escape at night, it’s just you and God, that’s your true character. And Son, if you spend too much time polishing your image, you’ll eventually tarnish your character and be an unhappy man.”

That night, my mom taught me that being my true self was far more important than trying to impress people or pretend to be someone I was not.  Your character is who you really are and your image is what you are perceived to be.

Two particular lessons stand out in my mind. One morning, I was standing with two friends by the radiators in the hall at school, warming up. We had religion class before school every day at 8 a.m., and we were out there before class, talking about the things kids talk about. One of the guys said, “Yeah, the Salvation Army, isn’t that funny what they do? You know, they’re outside ringing the bell, and they’ve got that little pot.” Not really making fun of the Salvation Army, but sort of jesting, like kids do.

Well, the bell rang, so we went to religion class. Our religion teacher was Father Hogan. He called on the three of us who had been talking in the hall and asked us to stand up. He said, “You know, I heard you three boys out there talking about the Salvation Army. I wonder, do any of you guys know the motto of the Salvation Army?”

We each responded, “No, Father.”

Father Hogan continued, “Well, let me tell you what it is. It’s to love those who aren’t loved by anyone else. The next time you good Catholics are going to make fun of something, remember that.” To this day, that lesson about compassion and sensitivity has stayed with me. Every year at Christmas, when I’m shopping with my wife or daughter and we encounter a Salvation Army volunteer with a red kettle and a ringing bell, I walk over and put money in the pot. I also share with that volunteer what that wonderful priest taught me.

Father Hogan taught me a second lesson on the importance of being prompt. There are rules — and they are not meant to be bent, twisted, manipulated, or bartered with. The moment I learned this lesson is vivid in my mind. The sports teams at our tiny Catholic school played the biggest schools in the state. I thought I was a big shot athlete. I was the leading scorer in the history of North Dakota High School basketball. I broke the school record in the 440, and was a star on the football team. I thought I was something! Getting a little full of myself, I felt some of the rules didn’t necessarily apply to me.

I had no idea where he was headed, so I said, “One-fifteen.”

He held my eligibility slip in front of my face and he said, “What time was this due?”

“Ah-hah, that’s good you can tell time. And you knew when it was due in my office.” He started ripping my eligibility slip into small pieces, then deposited the pieces in the wastebasket and said, “Now get back up in your classroom and start learning promptness. This slip was due at one o’clock. You’re not going on the road trip this week.” I thought he must be joking. After all, I was the superstar. Well, guess who didn’t go on the road trip?

Stay tuned for more next month, Getting Over the Four Hurdles of Life, with Coach Dale Brown. 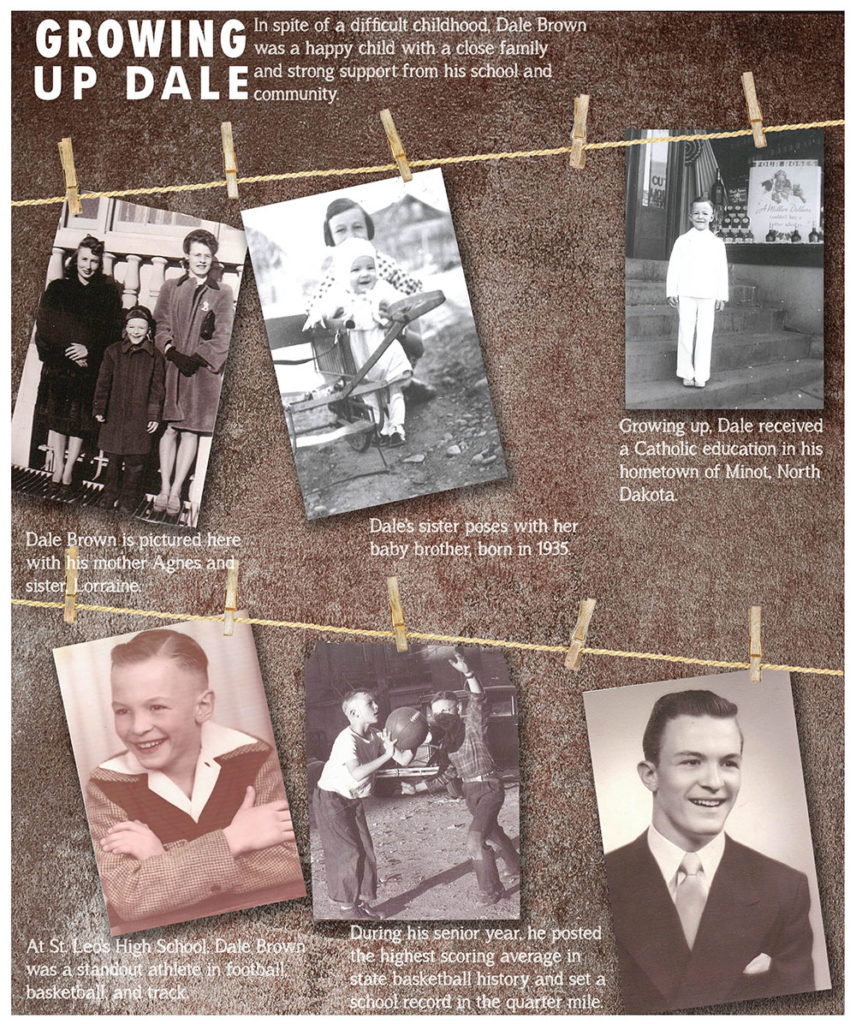 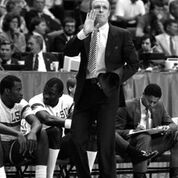 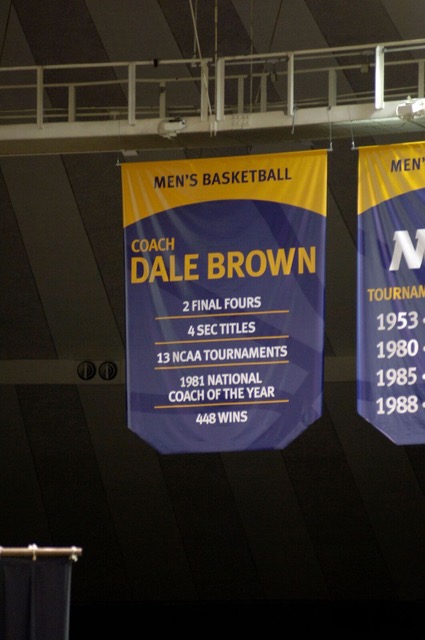 However, working together is only a beginning. The world needs leaders who find their strength in faith and character. Exceptional leaders will get their team members to feel they’re an integral part of a common goal. How is this done? This may sound odd, but the underlying theme of teamwork is our ability to convey a renewed sense of optimism. Teamwork doesn’t just happen – it takes a captain to steer it in the right direction. The role of the captain – whether it’s a coach, teacher, father, mother, or whomever – is to give the ship direction, purpose, and ultimately success.

We need to make a difference, but we can do it only through the grace of God. I am convinced that we are capable of solving any problem, whether it’s race, crime, poverty, terrorism, pollution, drugs, or whatever plagues humanity.

You, with God’s help, are responsible for your future. You’re really free the moment you don’t look outside yourself for someone else to solve your problems. You will know that you’re free when you no longer blame anyone or anything, but realize you control your destiny and are capable of changing the world. People can be divided into three groups: those who make things happen, those who watch things happen, and those who wonder what happened. We’ve got to decide which group we will be in.

The most important thing to God is our relationships with one another. He made us in such a way that everybody needs somebody. And God’s idea for success is a community, a group of people who are committed to each other and who strive to follow his will. Humans have not advanced a centimeter in the history of the world if we are still fighting, hating, killing, and cheating.

The only notable advancement humans have ever made is becoming brothers and sisters who labor toward a common goal. You see, the best potential of “me” is “we.” So the question in our life journey is not whether God can bring peace, love and happiness in the world.

The question is, can we?