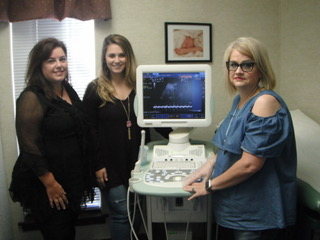 For Jean Phillips, it was an opportunity she couldn’t pass up.

That’s why the ultrasound technician decided to help a group committed to life, even if it meant making some sacrifices of her own.

In 2016, Phillips was asked to lend her expertise in medical sonography to Baton Rouge’s Pregnancy Problem Center, a nonprofit organization that encourages life choices in unplanned crisis pregnancies. The center had just received an ultrasound machine as a gift from the Knights of Columbus and needed an experienced technician to run it.

“Dr. Wayne Gravois was on the board of the center and contacted me. He knew I had experience (in sonography),” said Phillips.

But what Gravois didn’t know was that Phillips would have such a strong belief in the use of ultrasound that she would not only volunteer, but also willingly reduce her work hours and pay in order to help. “I’ve always been pro-life and believed that God formed us within the womb,” she said. “When I began doing ultrasound, it just confirmed everything I knew about the beginning of life.”

With 30 years of experience in the field, Phillips has seen first-hand the difference an ultrasound makes in the way some women view their unborn child. “It’s the heartbeat,” she said. “Once they see the heartbeat, they know it’s a real baby. Some women have changed their minds about having an abortion after that.”

Eventually, more technicians were needed at the center, but they weren’t easy to find. So Phillips, who attends Bethany Prayer Center South, began to pray. Today, those prayers are answered with four volunteer ultrasound technicians at the center.

Bri Schilling is one of them.

“I was raised Catholic and have always been pro-life,” she said. “I thought if I could make a difference and change someone’s mind against abortion, I would want to do that.”

Schilling, who will finish her maternity leave in late October, said she enjoys volunteering at the clinic. She has found that by helping other people, she receives more in return.

Thuyloan Pham, another ultrasound technician at the clinic feels the same. “Helping the women brings me joy,” she said, adding that she is pro-life and supports adoption.

“Our technicians have been a true blessing to us,” said Frances Broussard, executive director of the Family Life Federation/Pregnancy Problem Center. “Having this ultrasound and being able to offer it free to the women who need us is important.”

The center’s ultrasound services are not diagnostic and are used only as a way to show the baby’s growth and heartbeat to the mom-to-be. Established in 1975 following the Roe vs. Wade decision, the center offers alternatives to abortion, including referrals to medical and community resources.

“Sometimes the women who come to us don’t know where to start, but we can help them,” Broussard said.

One unique aspect of the center is “baby bucks” which new moms and dads can earn while attending educational classes on topics ranging from pregnancy to parenting. These “dollars” are then spent at the center’s “Mom and Me” store for new or gently-used items such as diapers or clothes.

Broussard said the center has to rely on donations for its store, but God always provides.

“There have been times when we are really low on one item, like diapers, then all of a sudden, we will have these individuals or a church group walk in here with lots of diapers. It’s amazing, but I really believe the Blessed Mother is watching out for us and for the babies,” she said.