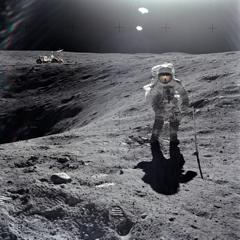 Only 24 men have seen it. And retired astronaut Charlie Duke is one of them.

At 83, Duke is still the youngest man ever to walk on the surface of the moon. He said his time in deep space showed him God’s Word “is the truth.”

Duke shared his personal testimony as well as his memories aboard NASA’s Apollo 16 space mission during a breakfast gathering of more than 300 men in Baton Rouge. The group, which included men from all walks of life, as well as a number of father/son duos, was up early for a meeting of Connections, a local ministry for men. Founded by Clayton Hayes, Connections strives to help churches, families and the community by strengthening the relationship between men and the Lord.

Duke’s first-hand account of what he saw in space was powerful. “The Bible speaks the truth, not only about the nature of God and the love of God and the person of Jesus Christ, but also about the physical universe in which we live,” Duke said.

Narrating a silent DVD of personal and official NASA photos, Duke described the sense of awe he and his colleagues, Commander John Young and Command Module Pilot Thomas Mattingly felt as they rocketed their Apollo 16 spacecraft to the moon on April 16, 1972. As they orbited in space, some 20,000 miles away from home, Duke said the Earth floated into view.

“It just hung there. In the Book of Job (26:7), we hear ‘God suspended the Earth upon nothing.’ That’s what it was. It was suspended and hanging on nothing,” he said, adding that many people have seen pictures astronauts have taken of the Earth from space. “The pictures just don’t do it justice.”

“You look out the window, and you don’t see any stars. You see the Earth, the moon and the sun. Those are the three objects you see out in deep space. It’s just awesome,” he said, emphasizing, “Scripture talks about the heavens proclaiming the glory of God, and there it is.”

As Duke made connections between the Bible and outer space, he also admitted to his audience that back then, when he graduated from the Naval Academy, joined the Air Force as a test pilot, and was selected as an astronaut, he wasn’t much of a Christian. Yes, when he married and became a father, he and his family attended church every Sunday, but their lives were different behind closed doors.

Duke retired from NASA in the mid-70s and was frustrated with his new career in the private sector. Plus, he was having a difficult time at home. “My wife and I were heading for a divorce,” he said.

But around this time, his wife gave her life to Christ, and slowly Duke began to change, too. In 1978, he and his wife accepted an invitation to attend a weekend retreat. Duke admitted he really wasn’t interested in going at first, but when the event ended, he kept focusing on certain Bible verses, like John 3:16. He then began to realize that either those verses were true, or they were “the biggest lie ever perpetuated on humanity, and I get to decide.”

“Sitting in my automobile, I looked over at Dotty, and I said, ‘Dotty, there’s no doubt in my heart that Jesus Christ is the son of God,’ and I said, ‘Lord, I give you my life,’ and I experienced the peace of God for the very first time in my life,” he said.

As God’s peace fell over him, Duke said there were no blinding lights, booming voices or angelic hosts descending from heaven. “But I knew that I made the right decision, and I knew that my life was going to change from that moment on,” Duke said.

First, Duke began to experience an insatiable desire to read the Bible, and little by little, God’s Word changed him. He became a better husband as he worked to love his wife in the way Jesus loves the church, and he became a better father by recognizing he had to stop what he called his “explosive” temper around his two boys.

In addition to making a difference in his family, which now includes nine grandchildren, Duke also recognized a need to place God above money. It’s a practice he still preaches, and one found in the creation of Duke Ministry for Christ, a nonprofit he and his wife founded to help spread the love of Jesus.

In 1990, the Dukes published Moonwalker, a biography of sorts, which explains Duke’s 11-day space mission as well as his testimony.

Duke and his Dotty, who live in New Braunfels, Texas, enjoy traveling and speaking to groups all over the world. Even though he has accomplished many incredible feats, including serving as Apollo 11’s Capcom or the voice that first answered Neil Armstrong during the first moon landing, Duke said sharing his faith story is the most important thing he can do.

“I have shared my story standing on pool tables, in bars, any place that people will come out. Some people won’t come to churches, but they’ll come out for pizza and beer,” he said, adding that he feels he is doing exactly what God wants him to do.

“Through prophetic words, God told me, ‘I’ve had my hand on you ever since you were born. I have guided your steps. You didn’t realize it. My plan for you was always to land on the moon, then use that platform to go out and touch the world,’” Duke said, explaining that his message is simple, “God loves you.”