Where there is hope a community thrives. The most visible evidence is a colorful, first-class new playground, designed and constructed in conjunction with the community at BREC’s Hartley-Vey Gardere Park. But change is deeper than that.

“I just thank God for the way things are improving, people’s mindsets are improving,” explains Gardere Initiative President Caulette Jackson-Guillard. A former resident of the Gardere neighborhood, she recalls a sense that giving up – not stepping up – was prevalent. The prospect of overcoming the avalanche of individual and community challenges seemed too distant, too lonely, too hard.

“They’re being inspired to hope again, to believe that it can happen. And if we just stick to stuff and not give up it’ll work out. Perseverance is ringing in my ears,” Jackson-Guillard said. That’s the point. This is not just a playground, but a physical and symbolic coming together for neighbors.

A key part of the project was a series of town meetings in which Gardere residents considered their needs and designed their own playground structure. Children created tiles for the playground benches. Under the supervision of Planet Recess, neighbors joined Louisiana National Guard Teen Challenge and local Boy Scouts in building the structures and shoveling a mountain of mulch to form the soft playground surface. 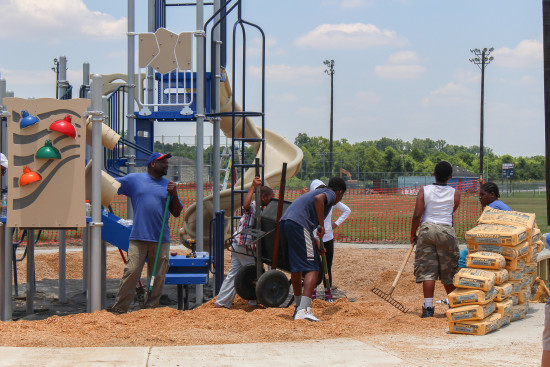 “110 yards of mulch was placed in half the time it usually takes, and a five-deck play system went in about an hour and a half earlier than scheduled,” said Treynor McAdams, owner/president of PlanetRecess.com. The playground grant is part of Let’s Play, a nationwide system of community partnerships designed to motivate children and their families to be active. Dr. Pepper, Snapple and national non-profit Kaboom awarded BREC a $15,000 community construction grant to build the playground. 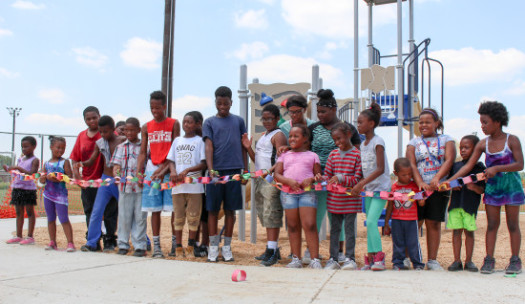 “One of the major goals of the Gardere Initiative is to create a community and I think this park is going to be essential to creating that community,” said Gardere Initiative Treasurer/Secretary Murelle Harrison. “So that’s why this is so important.”

“We’re involved with our kids,” said Andrew Stevens, commander of the Gardere Substation, EPRP Sheriff’s Office. Working side by side with residents to build the playground is part of an ongoing effort to build relationships and invest in the community. “They look up to us and that’s a good thing because you don’t find that a lot across the country with law enforcement.” He credits Sheriff Sid Gautreaux who challenges each commander to have a good working relationship where they serve – and holds him or her accountable.

“When I walked into this it was like I just walked into a blessing because the people were just so receptive to law enforcement.” 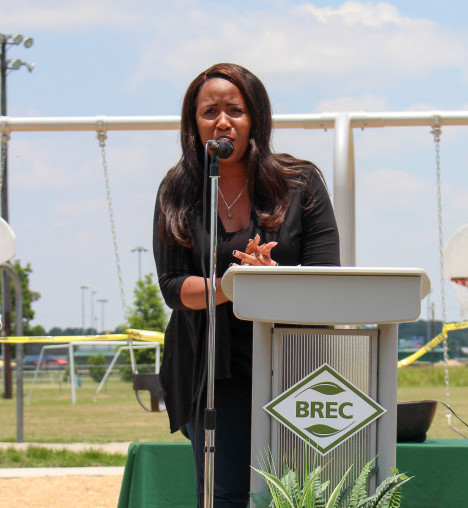 “It’s a milestone – something that we have been praying about and hoping and desiring for the kids in this neighborhood,” said Jackson-Guillard. “I believe that such things bring ownership. You take care of what you helped build, and the things come to fruition that you thought weren’t possible.”

“Our heart is so happy, so contented to know that we’re continuing to move in the right direction,” said Harrison. And I also know that all this is only possible through Jesus Christ himself. We’re very blessed.”