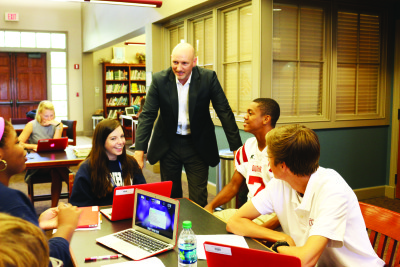 Steve Eagleton’s career path has been marked by quite a few twists and turns. His spiritual path, however, has been pretty clear since he committed his life to Christ. Interestingly, those two paths converged to lead him to his current role as Head of School at the Dunham School.

A native of Linlithgow, Scotland, Eagleton came to the U.S. on a soccer scholarship in 1986. After college, he worked briefly as a fitness director and then landed a job as a soccer coach in Baton Rouge. By 1999, he was serving on the Baton Rouge Soccer Association as director of coaching, but he felt called to do more. A close friend had led him to Christ and Eagleton had been asking God what he should do with his life.

“I was living with a friend,” he said. “I had sold my car, and I actually had a plane ticket back to Scotland. I kept saying, ‘Okay, God, now would be a good time to let me know what I’m supposed to do. And you know me … it’s likely that I’ll miss your sign unless you make it really obvious.”

He smiles when he remembers those days. “I was just days away from leaving the country,” he said. “And then I got a call about the Young Life program.”

Young Life is an international youth ministry program that had achieved success in the public schools, and local organizers wanted to expand it by taking it into the private schools. As they searched for someone who could work well with teenagers, Eagleton’s name kept coming up. They asked if he would meet with them.

“We were sitting there at the Cane’s on Lee Drive,” Eagleton said. “We were discussing Parkview Baptist and within minutes, a group of boys from Parkview walked into the restaurant. And I knew several of them. A little while later, we were discussing Dunham … and a car pulls up and a group of Dunham students get out. And again, I knew several of them. It gave me chills. I knew I had my sign and I agreed to the job right then and there.”

Eagleton’s work with Young Life led to a series of jobs at Dunham … Bible class instructor, coach, teacher, director of technology, dean of students, principal, assistant head of school … and finally, head of school. He calls himself a servant leader and says he is blessed and grateful for this new role which he believes was God’s plan all along.

“Our school is as academically strong as any school in the city,” he said. “But as a Christian school, we also have to be Biblically excellent. We stress Biblical values and we provide an environment where our students can investigate their faith in a safe manner and develop a strong relationship with Christ.”

The choice of a Christian education, Eagleton says, is the smartest decision parents can make. “The students find so much strength from having not just Christian teachers, but Christian coaches, mentors and other leaders.”

But parents have to do their part. “It’s important to pray with your children,” he said. “To read Scripture with them. To understand what it means to walk with Christ. Dunham is a special place where the teachers, the parents, the school and the church are all aligned in their mission … to train young hearts and minds for Christ.”