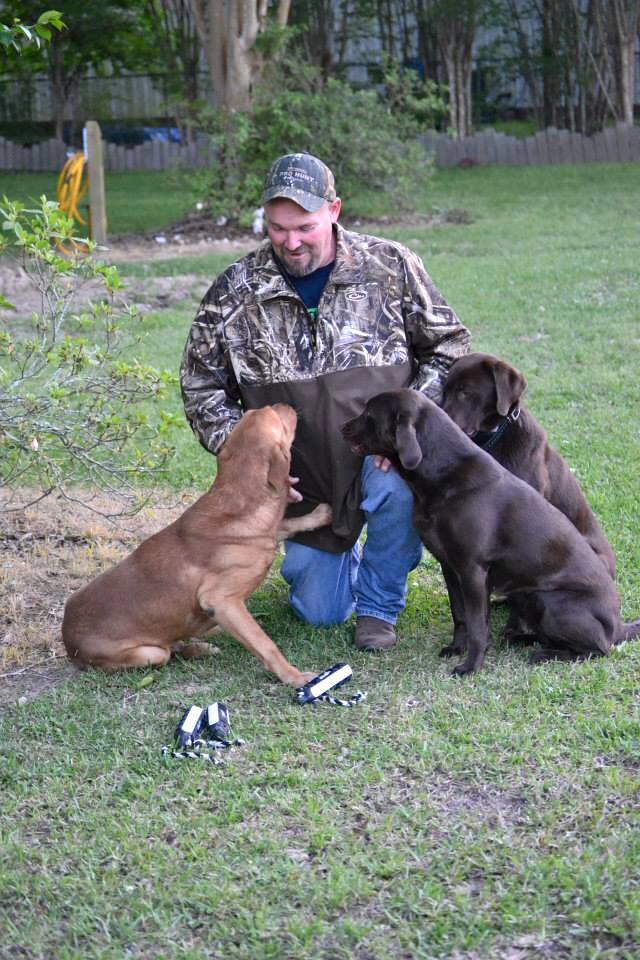 On command, a sleek Labrador retriever trots through the auditorium. She is strong, highly trained and focused. She is on a mission – to retrieve a lost “sheep” tucked away by the trainer she adores. Ignoring the distractions around her, she listens intently for his voice, follows his lead and obeys his command. Come. Sit. Stay.

Through Obedience to Death ministry, Johnny Morgan takes his prized Labrador retrievers to churches and schools from Louisiana to Oklahoma to explore the character of God and his relationship to believers. He hopes to encourage people to live in attentive obedience to God. The response is remarkable.

“People pay attention to dogs,” explains Morgan, who serves as associate pastor and student minister at Live Oak Baptist Church in Denham Springs (Watson area). “When we first started, we figured probably five or six presentations, with two or three thousand people. We never thought we’d have 62,000 people.” To date, Morgan says some 8,000 people have come to know the Lord through the dog ministry.

His highly trained labs – Glory, Journey and Zach – are crowd-pleasers. Glory sits in rapt attention to Morgan, and only Morgan. “I’ve had 1,600 students chant her name and she’ll only go on my voice command,” Morgan says. That’s just how we’re supposed to fix our eyes on God. He knows our voice and we know his voice when we’re walking with him.”

“And I think in today’s society, we don’t get still enough,” Morgan says. “We just rush, rush, rush, and that’s a constant reminder for me that I need to get still and I need to know him, and when I do, he’s going to be exalted.”

Obedience to Death is an outgrowth of Kingdom Dog Ministries in Houston, Texas, a nonprofit that trains dogs and holds presentations across the U.S. A longtime connection with founder Hank Hough kindled Morgan’s interest in the dogs’ abilities. He says the timing and substance of his ministry was also God’s design.

Hough uses scripture to register his ministry dogs with the American Kennel Club. Morgan’s original dog responds to the name “Glory” for training and command purposes. “After we made the final decision, I asked, ‘what’s her registered name?’ When he said Psalm 46:10, I got real quiet,” Morgan says. “It’s like God had put her aside for me three years prior to that, and my first dog in this ministry was going to be my life verse.”

Hough began using scripture names at certification hunt tests to spark curiosity. When the names of successful dogs are announced, other owners often ask, for example, why he named his dog John 8:28, “Then Jesus said to them, ‘When you lift up the Son of Man, then you will know that I am he, and that I do nothing of myself; but as my Father taught me, I speak these things.” Hough uses that opportunity to start a conversation about Jesus.

People often ask what it takes to run a dog ministry. Time, commitment and money are key, and the investment is significant. “They’re my dogs. They live with me and I spend 20 minutes every day with each dog, minimum,” Morgan says. “If we really spent 20 minutes in God’s word and prayer, our lives would be transformed just like theirs.”

Through consistent training and companionship “at some point the light bulbs start going off as to what he’s called us to do,” Morgan says. “My young dog that I’m training, Zach [Zachariah], has the registered name Proverbs 3:5 and 6,” a challenge to walk in faith. “Trust in the Lord with all your heart, and lean not on your own understanding; in all your ways acknowledge him, he shall direct your paths.” 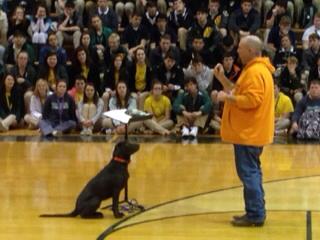 Morgan says commitment to Christ has come with divine provision. “I have not put any money into my dog ministry; it’s all come from donations by people who have seen it or they believe in me or believe in the ministry and want to bless other people.” Obedience to Death operates as a nonprofit that provides performances free of charge, although many of the schools and churches he visits provide donations. That makes it possible to visit locations that cannot afford to hire motivational speakers.

“One principal said we accomplished so much in our presentation because there were probably 70 kids that accepted Christ in the school that day out of 700. To not charge was a blessing,” Morgan says.

Members of Live Oak Baptist help support Obedience to Death with prayer and contributions. “I have probably 20 people who have donated to help buy dogs and equipment. I have a prayer network of just prayer warriors that are praying constantly for my ministry,” he says.

“So it’s just about being obedient and being available. I’ve hunted literally since I was big enough to walk,” he says. “To be able to use that for God now is incredible.”

To learn more about Obedience to Death, contact Johnny Morgan at: Johnny@liveoakbaptist.org, or call 225-243-6138.