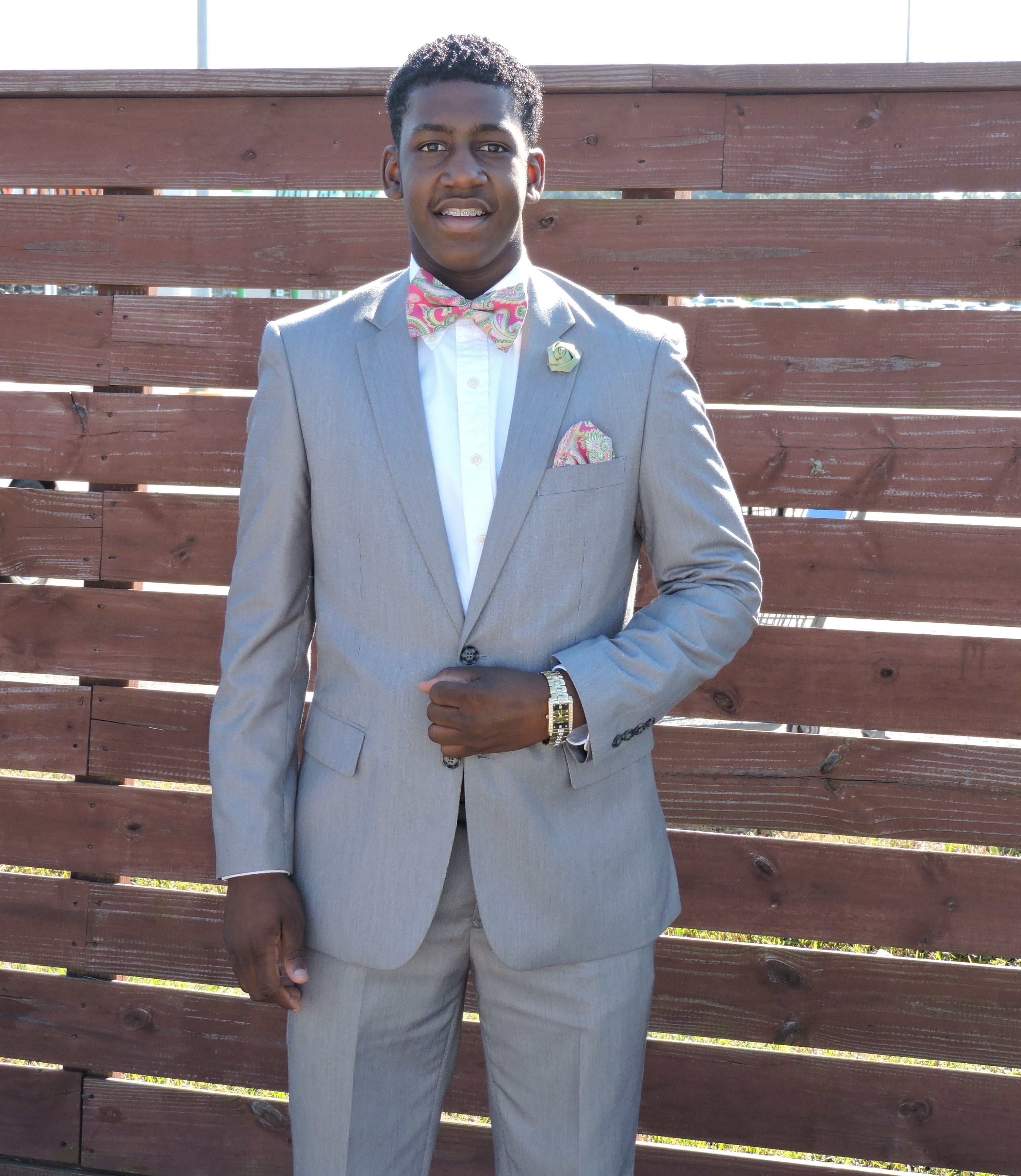 As 2016 dissolves into the past and 2017 thrusts us ever closer toward a new decade, we owe it to ourselves to be bold. The start of a new year is the perfect time to shed insecurities, flex creative muscles and start chasing dreams. The missed opportunities and blunders of the old year become history, and – at 12:01 a.m. January 1 – our lives reopen to the limitless possibilities and excitement of the future.

Millennials are notorious for their confidence. We have learned through life experience, observation and intuition that purposefulness outweighs mediocrity. As a result, many millennials have chosen to pursue their passion instead of settling for stability. This self-assurance has led to a generation of people that are redefining words like “success” and “ambition.”

For example, Kimani Alexander is a busy guy. He’s a 17-year-old student at Scotlandville Magnet High, where he serves as the junior class president. He is heavily involved in a host of extracurricular activities, serves as the chairman/president of the junior deacon board at Mt. Pilgrim Baptist Church, helps his family around the house, and – despite that amazingly full schedule – finds time to run a small business.

Alexander comes from an industrious family. His grandfather is an engineer as well as a dentist, and his grandmother runs a lucrative sewing business. She designs and produces ladies’ formal wear, and she taught her grandson how to convert his creativity into something tangible.

She taught him how to sew, and he fell in love with making gentlemen’s trimmings — bowties, handkerchiefs, etc. “I picked it up from her, and I’ve been doing it for a year. I’ve been doing pretty good with it, too,” he said. He has done so well that, in the course of 2016, he made nearly $1,000 in profit.

Alexander designs, constructs, and sells his handmade accessories in a workspace he and his grandmother share. His bowties in particular show a serious talent for fusing whimsy and style. Throughout the past year, he has taken the basic constructional elements of bowtie-making and very subtly revolutionized them.

Anyone who has ever worn a bowtie is surely familiar with the sweaty aggravation of getting them to fit properly. You must either fight with complicated metal tabs or study YouTube clips on proper tying methods. Either way, it winds up being more of a hassle than it is worth.

Alexander has taken all of that into consideration and developed a technique that helps avoid any bowtie related stress. His design modification is so practical and clever that it is nothing short of genius. He stitches one of his well-crafted bows onto a thin elastic band, just wide enough to comfortably fit around the average neck.

All the wearer has to do is slip the elastic band over his head, situate it under his collar, and fold the collar down. Voila! An instant and perfectly tied bowtie. If it sounds like one of the simplest and most remarkable innovations to formalwear that you’ve ever heard, then you are correct. 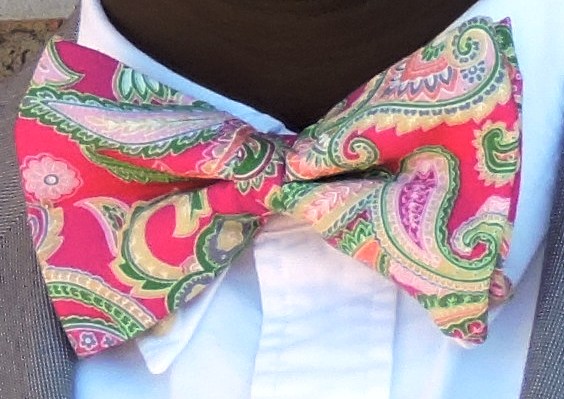 But bowties are not just a part of his moneymaking venture. For Alexander, they are a way of life. You won’t likely catch him without a suit and tie, because he believes in the power of dressing well. He said, when you put forth an effort in your appearance, “You look more intelligent, it highlights your character, and it brings your personality out in how you carry yourself.”

Alexander and his business are examples of the ways in which millennials are reshaping the global economic landscape. It is more important now than ever before to demonstrate a can-do attitude in the workplace. Forbes.com highlighted a 2014 study conducted by Bentley University, which “suggests that Millennials sense that career success will require them to be more nimble, independent and entrepreneurial than past generations.”

As the American and global workforces begin to shift with the influx of millennial laborers, the way in which employees interact with their workspace is also transforming. The same Bentley University study indicated, “Millennials are less interested in managing others than in having their autonomous, creative work lives.” Like Alexander, more and more young workers are more concerned with pursuing careers that suit their personality/creativity, than with working at a job that provides little beyond stability.

Even though he is only 17, Alexander represents the national trend of increasing numbers of millennials starting and building small enterprises. Fortune.com says, “While the older generation launched their first businesses at roughly 35 years old, so-called “millennipreneurs” are setting out around 27.” So, although the risks may be high, many of our peers are working hard to transform their occupational fantasies into reality.

If you would like to support Kimani and purchase one of his bowties or handkerchiefs, simply direct message him on Instagram or reach out to him on Facebook. Search “K. Alexander Bow Tie,” and his information will present itself. Whether you need something for prom, a wedding, or just want a slick tie for your wardrobe, he has a great selection of readymade merchandise and is willing to take commissions, too.

Long term, he plans to graduate high school and pursue a business degree at Southern University. Alexander hopes to delve deeper into entrepreneurship and continue to learn the ins and outs of economics, as he matures. His favorite quote is, “Without hard work, nothing grows but weeds.” The hard work he is putting forth at 17 will ultimately have a great and lasting impact on his future abilities as a businessman. 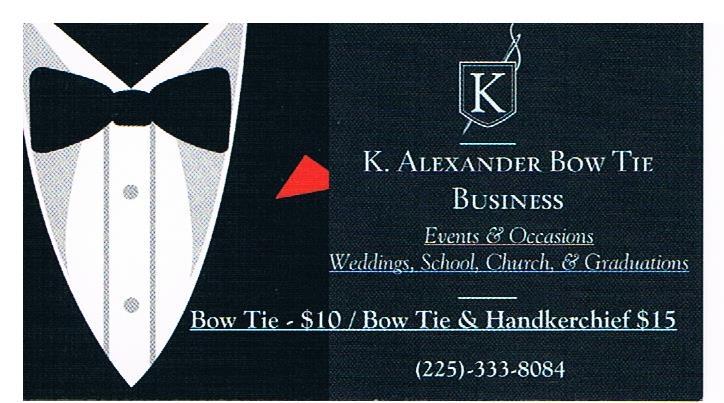 Despite everything that occupies his time, Alexander says his ultimate goal is to “teach and motivate others to do their best.” His drive and work ethic are built on passion, determination, and faith. “I thank God every morning for waking me up and for his many blessings. I’m grateful for the motivated spirit he has given me,” Alexander said. He is such a fine example of how, with a little resolve and a great deal of perseverance, one can achieve anything one sets out to accomplish.

Venturing into entrepreneurship is just one of countless ways to be bold in 2017. The Lord is calling each of us toward a vitalizing and enriching purpose. Now is an excellent time to take notice of your passion, trust yourself and wholeheartedly chase your goals.

Fresh starts, bold moves and leaps of faith are possible year round, but January reminds us that our futures are crisp and limitless. New Year’s Day is symbolic of renewal, a day when we can bravely stare into the eyes of opportunity and see our lives as we would like them to be. Just remember, all things are possible with a bit of courage, the willingness to work hard and a healthy dose of faith.

1 thought on “Pursuing Your Passion in the New Year”