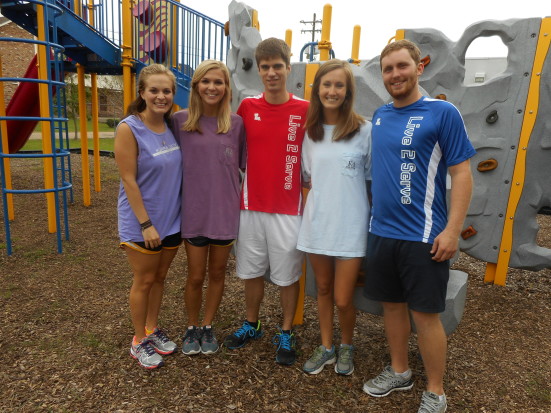 Every day, LSU student Jacob Allen Nichols stopped by a convenience store for his favorite coffee. And every day, a little boy named Tyler asked him for change. “What do you want today?” Jacob asked. One day, the answer surprised him – not a cold drink or snack. He was an Astros fan. He wanted to play baseball.

A casual game of catch came next. Tyler caught the ball. Jacob caught the vision. Setting foot in the neighborhood just north of LSU opened his eyes to poverty, the hunger for opportunity, and the need for positive relationships and role models. Live2Serve was born. He saw it as a chance to be the hands and feet of Christ.

Live2Serve is a Christian nonprofit organization ministering to some 300 kids per month in the neighborhoods between the north gates of LSU and downtown. The organization is gearing up for the Dec. 20 Christmas in the Coliseum where kids receive gifts, play games, eat jambalaya and hear the story of Jesus’ birth.

Corporate sponsors may participate by contributing $50-10,000 and family sponsors by contributing $50-500. Major donors include Parkview Baptist School, St. Luke’s Episcopal Day School and LSU. The deadline for LSU organization sponsorships is Oct. 30 and for corporations, Nov. 16. Families may enlist as sponsors through Dec. 11. The fundraiser supports all of the ministry’s work, including baseball and soccer camps.

“We switched from coaching football and basketball to coaching soccer because soccer’s a perfect inner city sport,” Nichols says. “The main reason is that they can be aggressive, but they have to learn how to control that aggression.”

“I want our community center to not be a place of anger but to be strictly a place of love, nothing else,” says Nichols, a member of Christ the King Catholic Church. He describes his work as the modern-day complement to inner city pastors who desire a ministry for children and youth but struggle to balance full time work and ministry. 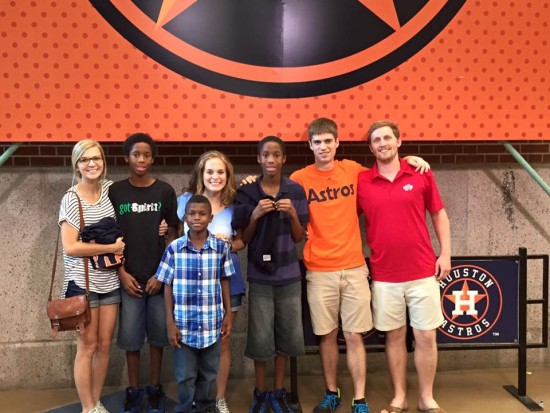 That means his door – and his heart – are always open. And kids come wandering in. Far too often, it’s a grieving teen whose family member or friend has been shot. Or, a girl who has experienced rape. Or, recently, a teen with a knife wound in his hand, surrounded by members of the youth group.

“None of them had a car, none of them knew what to do, so they came to the YMCA. I gave them a proper bandage to start off with and we went to the free clinic on Florida Blvd.” Nichols remembers. “And I thought to myself, ‘If we weren’t there, those other boys wouldn’t have been there to come to his aid and just scare off the guy who did it. And if we weren’t there and they still had that kind of brotherhood, where would they go?”

At a time when organizations typically struggle to involve Gen Z in nonprofit work, Nichols has successfully tapped into the fluid nature of young volunteers. They can come alone or in groups and serve whenever they want. Anyone may volunteer and no one is pressured to do more than they like. Sororities and fraternities often bring volunteers. Some 1,300 have participated.

“And I get LSU students who come and ask all the time, ‘Hey I’m not a Christian but can I still come out and serve?’ Absolutely,” Nichols responds. “If God can use a sinner like me, then who am I to say you can’t come?” Nichols has seen volunteers renew their own commitment to God and become active in local churches because of their Live2Serve experience.

Like all ministry endeavors, working with inner city kids is a challenge, Nicholas says. But he compares it to a thunderstorm. “Everything could be going totally going 100 percent wrong and you just get, like, a tiny little ounce of just God, of just Jesus, a tiny little bit of just doing good and you want to dance in the rain,” he says. “Like a kid who’s just had trouble and does something great.” Or the night that a kid turns his life over to Christ. “That outweighs everything.”

“I see the parable of the talents as my life. God has given me so much, and I want to be there for others as they have been there for me.”

“I look at these people God surrounded me with and I am forever indebted to them. I love the village proverb, where it says, ‘It takes a village,’ because that has been my life. That’s how it was for me. It took others seeing something in me that I couldn’t see in myself.”

Shandricka “Ericka” (as she became known by her professors because it was easier to pronounce) Jackson has a promising career with the Army and a passion for social work and bridging the education gap in minority students, but she is also the first person in her family to have graduated high school let alone college or to even think about graduate school.

“I do what I do to glorify God, but I also do it for the generations to come. I remember how I got here and how I could have been nothing, but God makes all things new. He can make us all new,” she said. Growing up in low income housing as one of 8 children in north Baton Rouge, Ericka describes Glory House Ministries as the beginning of finding her self-proclaimed village.

“[Their] mission was to not only bridge the education gap, giving us access to resources, but also to instill Christian values in us,” Jackson explained. Because of that, Ericka was saved at the age of 6 and sang at different churches every Sunday with the children’s choir. She attended church with her grandmother every Sunday, but when she turned 18 she decided to join First New Testament Church because they were the ones who sponsored Glory House Ministries leaving such a large impact on her life. 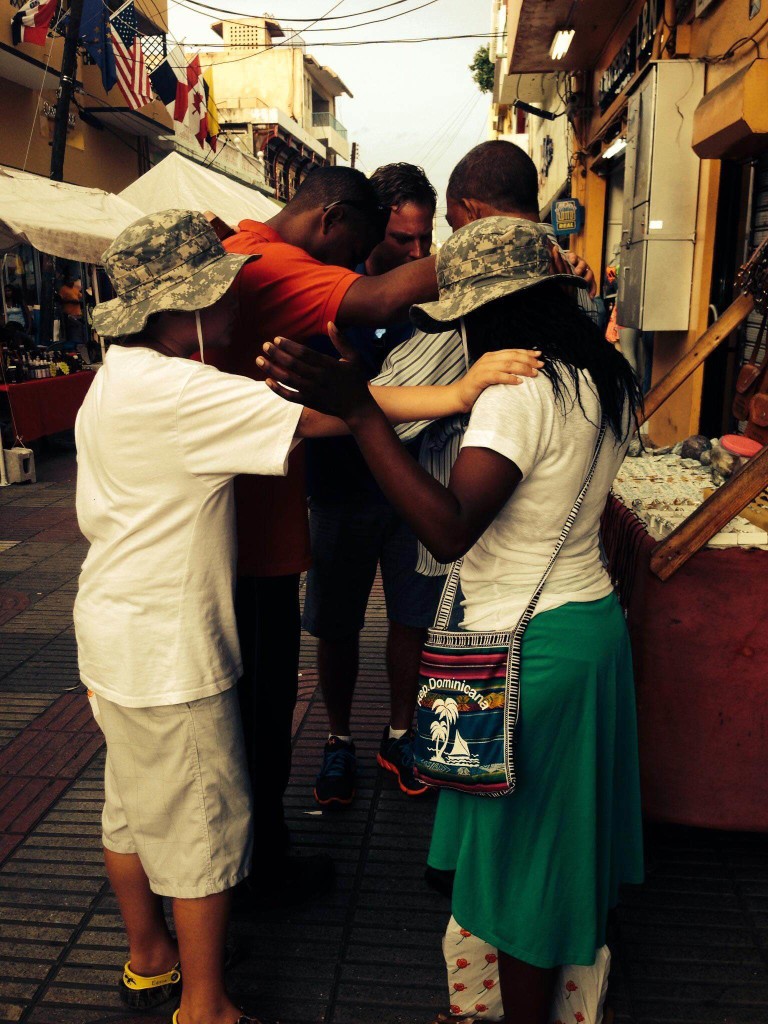 That impact has carried through still today. Ericka was active in their college ministry as well as the Baptist Collegiate Ministry at LSU in addition to serving as the women’s leader for the ROTC Bible study “Valor”.

For Ericka, high school was the time when her faith was most tested. “There was so much temptation. I didn’t have my mom or dad telling me what was right and what was wrong,” she said. “I was put in the JROTC program, which was basically used as a discipline mechanism, because I had a really bad attitude and I was very disrespectful.” After an altercation with a teacher left her expelled during her senior year, she knew she needed to get her life together.

“I didn’t want to end up like everyone else in my family, so I went to my pastor.” Ericka then met Jeffery and LaTasha Poole who took her in and gave her a place to stay. At the alternative school she met LTC Glen Sutton’s wife, Shirley, who emailed her husband while he was in Saudi Arabia.

“She basically told him he had a new child and he said, ‘OK’.” The Suttons went on to help her throughout college. Also at that time, Ericka joined the Baton Rouge Youth Coalition, a college mentorship program, where she met Peyton and Sara Marye – who were not yet married at the time – and they helped her apply for college, even paying her application fees and taking her to orientations.

“They pretty much did everything for me,” she said. “I mean they took me to my family orientation. Those three families together steered me in the right direction.”

“When I joined the National Guard it was because I didn’t have the money for college. I knew ROTC was a good decision, but I was hesitant about the program,” Jackson explained. “I began to pray that if it was the Lord’s will I would get in.” She then met Reggie Brown who explained the program to her and set her up with a guidance counselor. “He was very, very patient with me because it was a long process.”

“I had a 40 mile commute to Hammond every day. My car would break down once a week as I was driving home to see my grandmother, to care for my two autistic brothers, working a part time job and carrying a full load.” Mr. Brown helped make the transition very smooth even though she was admittedly terrified.

“My faith was tested every semester. I kept saying, ‘God, you said you were going to provide,’ and it would be just a few weeks before my fee bill was due.” But whether it was through cleaning houses, babysitting jobs, checks that were gifted to her, or unexpected scholarships the things she needed always arrived.

“That’s how I got my first car. Someone donated $2,000 so I was able to buy a 1996 Camry and I drove that for two years,” she said. “I got in an accident and was able to then buy a 2004 Camry, so when that car died, and through all of my adversities, I knew God was going to take care of me. I just don’t worry anymore because He’s proven Himself a billion times already.” 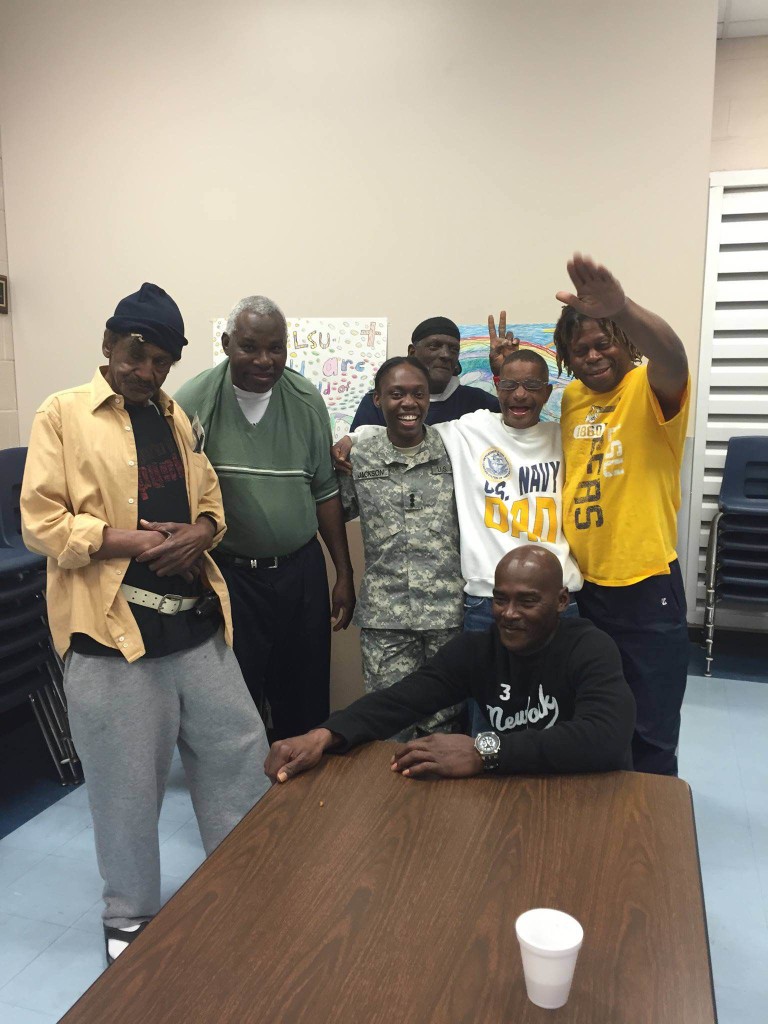 “Throughout all of it God’s hand has been on my life. I thank Him for the people who always led me to Christ first. We can talk about anything when I need guidance – any sin or mistake – and they listen. They took a chance with me. They didn’t know what they were getting, but they believed in me.”

There are so many to mention, the names literally go on and on. Ms. Rosie, her childhood neighbor, made sure they had food to eat and water if theirs was turned off. Steve and Donna St. Cyr have been her life coaches. David and Lisa McCollister have stepped in as her spiritual parents. “My grandmother is my biggest cheerleader,” she said.

Dr. Jennifer Curry stepped in to encourage her on her path when she repeatedly failed the Praxis exam. “There is no failure, that’s just God’s redirection,” she told Ericka, and helped her find her way in her path of social work.

As the keynote speaker at 3 military balls this year, Ericka had 4 pieces of advice to those in attendance, “Listen to the advice of others. It’s cliché, but true, that your attitude determines your altitude. Our circumstances influence who we are, but we determine who we become. And, lastly, it’s all about how hard you are willing to work, putting your best foot forward, and keeping God first.”

The list of organizations Ericka has been a part of and the work she is doing is too long to even list. She may have had a large village helping her along the way, but she has made good on her promise of being that village to others as well.