Chef John Folse says he has seen the hand of God at work throughout his life. 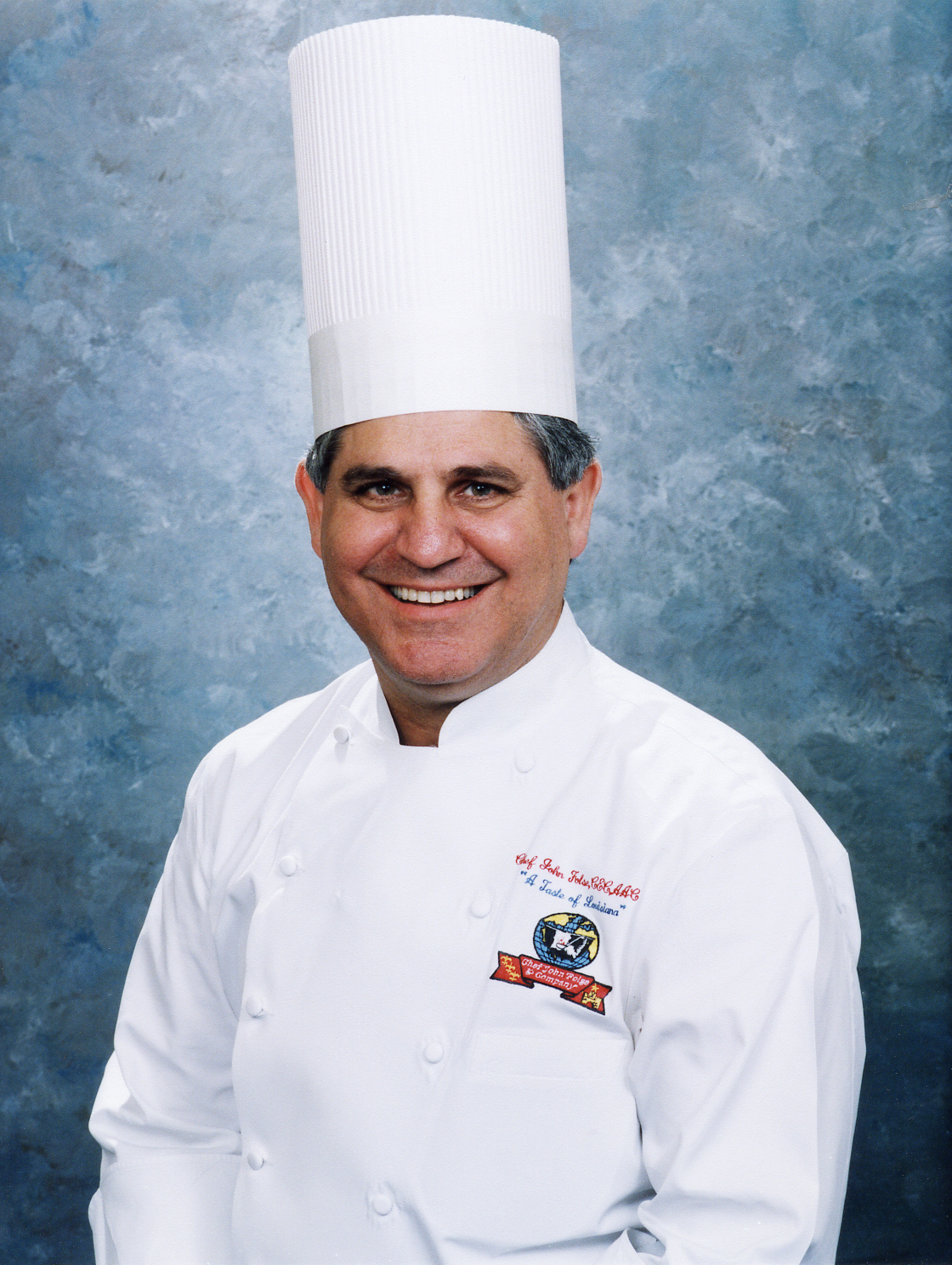 “I came from a place where every day my daddy went trapping to catch coon hides and mink hides to sell. I remember a mink hide was $1.50. So, if God could give us everything we needed in that environment, and in this little cabin grow a bunch of people of faith, a bunch of people who understood the need for each other, an African American woman who came to love us like her own, what other message do we need? What do we need to be thankful for? My God, what don’t we need to be thankful for?”

Internationally renowned Chef John Folse sees the hand of God at work everywhere: from the tiny herbs in his monastic potager garden to his global catering division. The Chef John Folse & Co. Cajun and Creole Company Store ships food all over the world, including sites in China, Russia, Taiwan, Korea, Japan and local grocery stores. His catering division, operating out of White Oak Plantation in southeast Baton Rouge, has fed troops in Iraq and Afghanistan, served world leaders and catered the London Olympic games – to name a few.

“There’s no possible way, knowing where I came from, unless the hand of God was all over it,” Folse said. His faith was forged in family and community with a deep understanding that God wants his love to be shared. It was a lesson – and a gift – that came early in life. 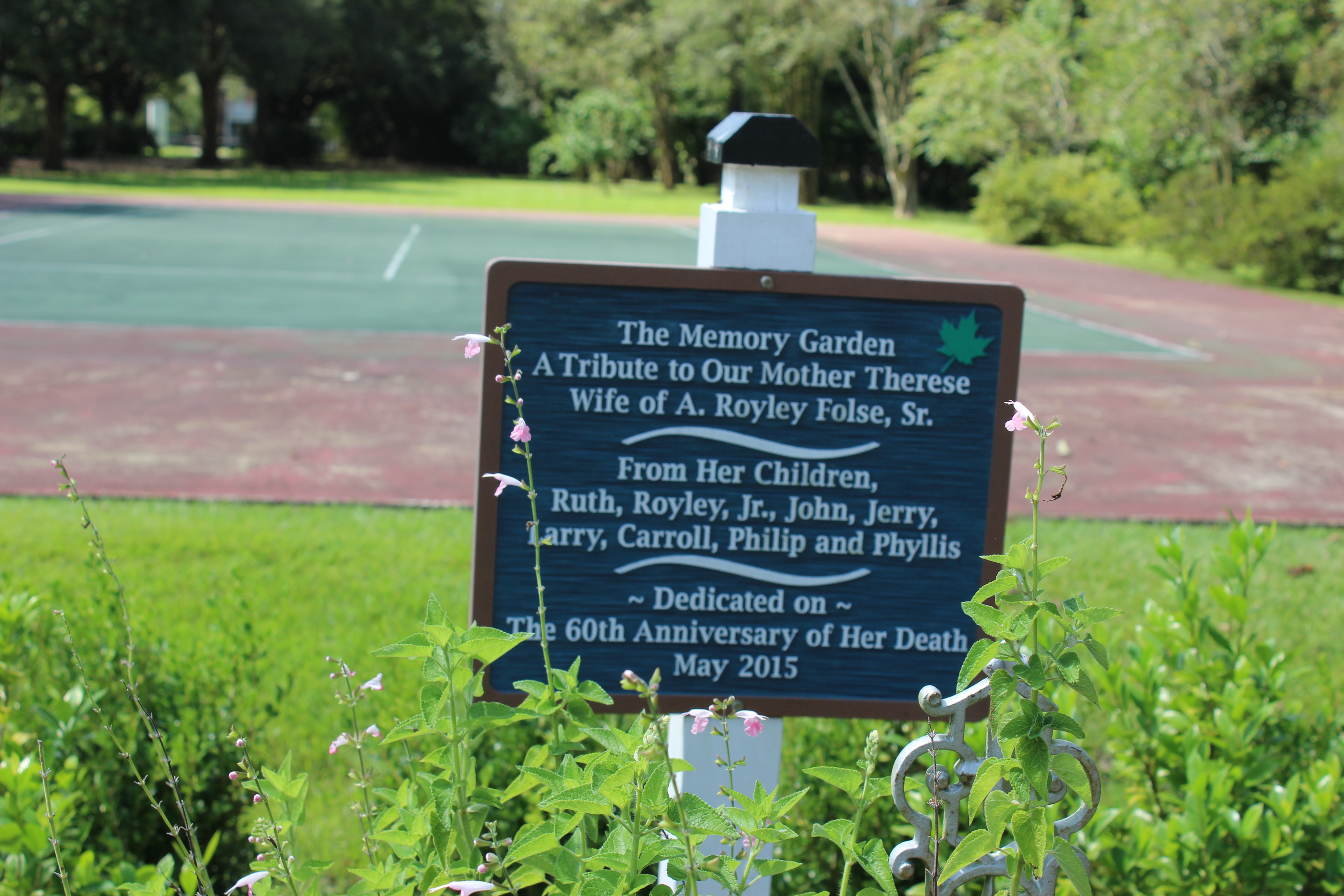 In May 1955, the heat was already sweltering when his mother, Therese Marie Zeringue Folse, began to hang out laundry by their home near the Mississippi River in St. James Parish. She was nine months pregnant with her 10th child. John was seven, his oldest sister was 10. A neighbor, Mary Ferchaud, was walking down the lane when she spotted Therese.

“She stopped and grabbed my mother, sat her on the step of our cabin, got her a glass of water out of the cistern and said, ‘Sit here and let me hang these clothes.’ Imagine now, eight children, twins only a year old, and mom’s having her tenth child because her first and her last died in childbirth.” Shortly afterward, his mother and newborn sister died.

“The thing I remember most about my mother’s death was coming back from the graveyard and my sister looking at us and saying, ‘Who’s going to say the rosary tonight?’ Mother did it, and Daddy said, ‘You’re going to do it,’” Folse said. “Every night if you were old enough to kneel you gathered around this big old bed to say the rosary. And we just kept going.”

“I’m thankful to a dad who raised eight children,” Folse said. His father, Antoine Royley Folse, made sure the children were on the front row at church every Sunday. “He said, ‘We’re going to stay together, I’m not going to break this family up.’”

Then came a knock on the cabin door. “When dad opened door, here was this beautiful African American lady,” Folse recalls. “Dad said, ‘Can I help you?’ She said, “No sir, I’m here to help you.’ And Dad said, ‘To help me do what?’ She said, ‘Raise these children, because about three weeks ago I was coming down the lane and Ms. Therese was hanging clothes on the clothesline. She took my hand and said, “If anything ever happens to me, would you look in on them?’”

Mary Ferchaud nurtured the Folse family for 22 years while raising six children of her own. Folse calls her the most generous gift God could give. “She was there every morning when we woke up and cooked lunch for us. When we got back from school it was on the table. She’d go back and forth between her house and ours. She was at every one of our weddings and every one of our confirmations.” 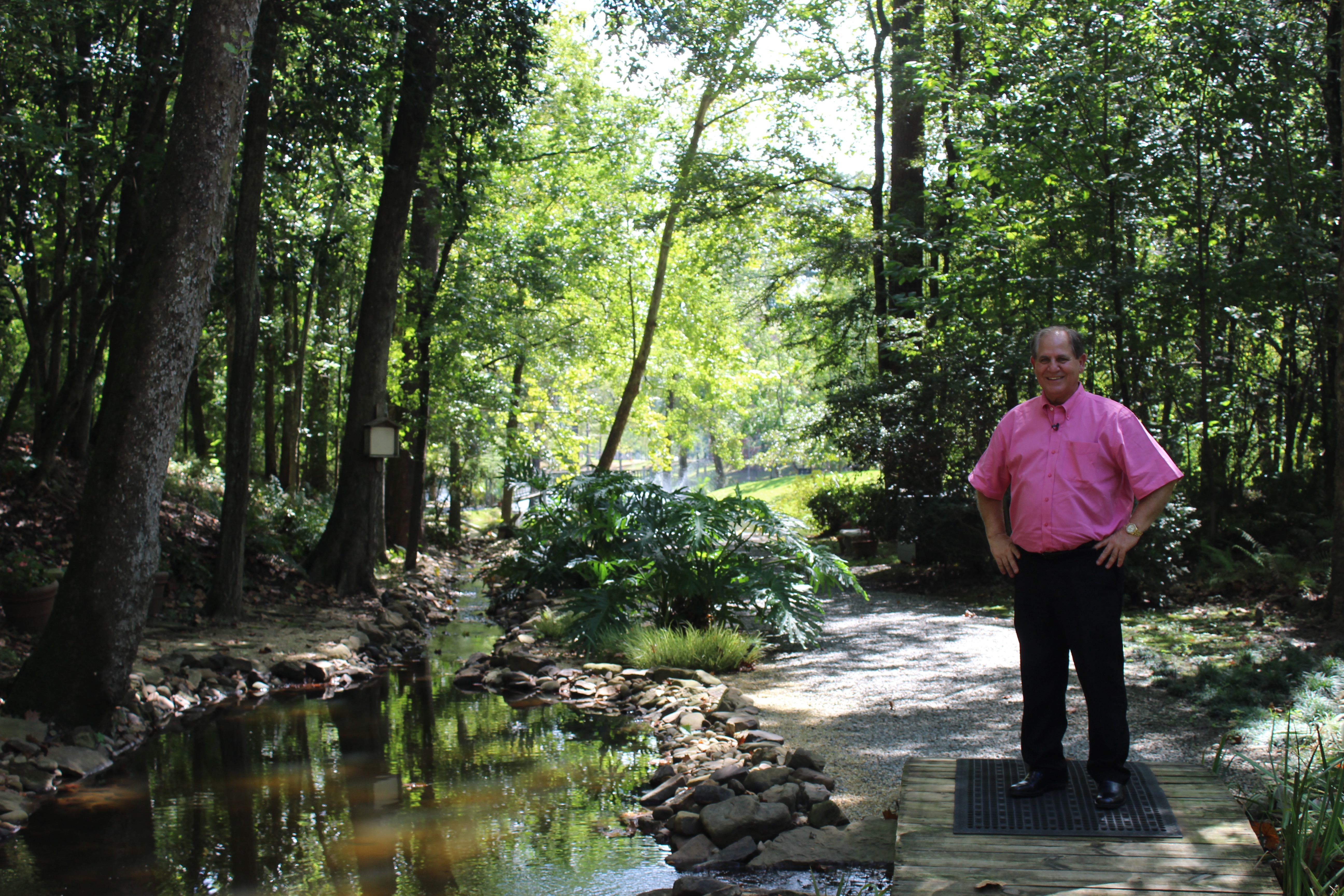 “I’m also thankful to grandmothers who came in to divide their own time to work with us and continue the fundamentals that mom had started to teach us,” Folse said. “I think of the parish church where I was an altar boy, St. James Catholic Church, on the west bank of the river. And I think of the old parish priest who knew of our challenges and just gave that extra time. I’m thankful to the neighborhood because everybody took care of us and we did our best to take care of them.”

“When you grow up in a place like that there are two things you have to do,” Folse said. “Number one: every day when you get up you have to get on your knees and thank God for today because he’s brought you here, through all of that. And secondly, you have to share it with everybody you see. You have to do everything you’re called to do.”

“My wife, Laulie, and I come from the same type of family. She was in Donaldsonville. I grew up in St. James. To own a company today is a great gift – to use our ability to share with those in need. It’s on our minds all the time,” Folse said. “Our first question to each other is ‘What can we do?’”

Crisis brings the opportunity to use the gifts God has provided, Folse said. In August, as soon as the water receded from the driveway of their home in Gonzales, he called out chefs and caterers from White Oak Plantation. They set up tables for a hundred people. “And all of a sudden, my driveway is full of workers: Spanish, African American, foreigners, FEMA workers, everybody,” Folse said. “They were devastated, but now they had a place to come and eat, and sit and talk to each other.”

“We can be an example to the world of what it takes for people to put strife, race and everything else aside and cling to each other in their own church, whatever that church is,” Folse said. He believes that Louisiana is uniquely positioned by God to demonstrate faith both in its adversity and the diversity of its Creole heritage: French, English, African, Spanish, German, Italian and Native American. His own ancestors walked from Germany across France in 1725 to reach ships bound for Louisiana. Only half survived the trip, among them, his seventh great-grandfather who built the first St. Louis Cathedral and Ursuline convent in New Orleans. 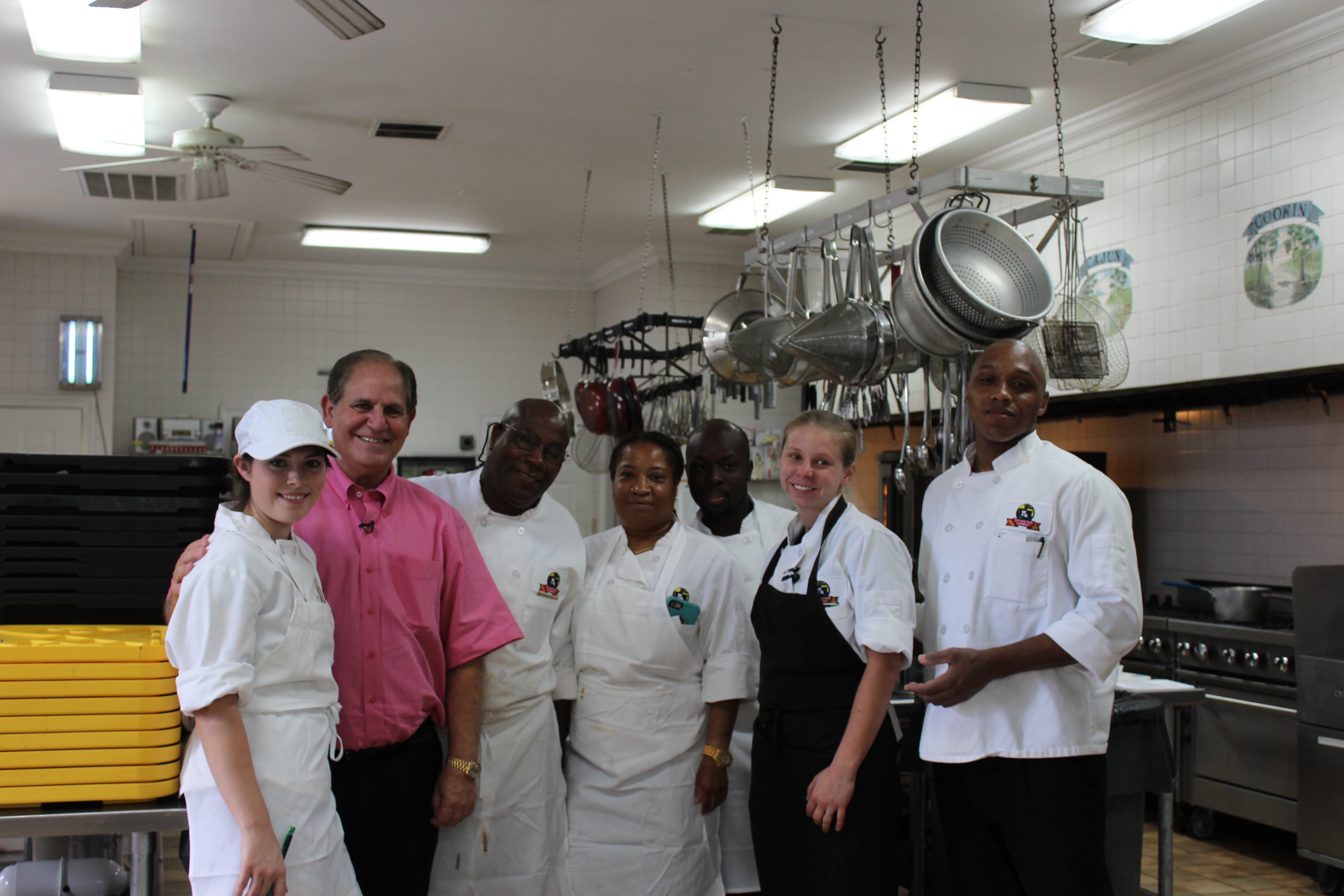 “I’m proud to have been part of a family that’s always been touched by God to give, share and teach. I think it’s our lot,” he said. “I know that under no circumstance do I have the talent, the wherewithal and the strength to do it alone. I’m fully committed to knowing that. Everything I have comes from a higher power and I could not be more thankful for it.”

“I never got up in the morning saying this is what I want to do,” Folse said. “I always call it the Mister McGoo syndrome” (a near-sighted cartoon character prone to walk unaware into tough situations but come out unscathed). “If you’re walking in the right direction that girder will always be there for you to stand on. It’ll always be placed in the right path.”

It was that commitment to love God and love others that resulted in an unexpected gift – a meeting with Pope John Paul II. When the pontiff planned to lay a new cornerstone at St. Louis cathedral in 1987, Folse was invited to feature a dinner showcasing Louisiana heritage. Fearing that New Orleans chefs would be offended, he stepped aside.

“At that luncheon at LaFitte’s Landing, Bishop Ott grabbed my hand, held it very tight and said, ‘One day the generous gesture you just made will make it certain that you get to cook for the pope,’” Folse said. Much later, Bishop Ott called to say Folse had been chosen to host the Vatican State Dinner, the first non-Italian chef to create a menu for the event in Rome.

“Standing in St. Peter’s Basilica and looking at the arms of Christ, I asked myself the question I’ve asked a thousand times: How in the world did you get here? It’s impossible,” Folse said.

At the papal summer residence, Castel Gandolfo, Folse and his wife attended mass with the pontiff and a small group of invited guests. They included six small children from Ireland who were disfigured in the Catholic-Protestant conflict.

“Afterward, he [Pope John Paul] sat on the windowsill and called the children, and one at a time they came. He took each one of them and he pressed his face against theirs. It made me realize right then just what God really is all about,” Folse said. “God was bringing me to Gandolfo to see what love is all about, and how I can bring that back home.”

“And I realized at Gandolfo that my life’s work was really to do what I was doing, sharing my youth and sharing the tragedy of losing family. The most important lesson, he said, is understanding the need to care for each other.

“I’m most grateful for the realization that I know God is in my life every day. And I don’t have to think of anything else. He’s going to tell me where I need to be. He’s going to give me all the resources I need,” Folse said. “He tells us a hundred times in the gospels and in the parables – everything you need, I’ll give you. You’ll be measured by what you do with it. And by your actions the world will know you.”

Editor’s note: Chef John Folse is currently filming a new program, “Can You Dig It? The History of Vegetables” for PBS and is also featured daily on Create®TV and locally on WAFB and Talk 107.3. He owns Lafitte’s Landing Restaurant at Bittersweet Plantation, his former home in Donaldsonville, and White Oak Plantation featuring catering and events. Chef John Folse & Co. features on-line shopping for Cajun and Creole products. He is a member of St. Theresa of Avila Catholic Church in Gonzales.